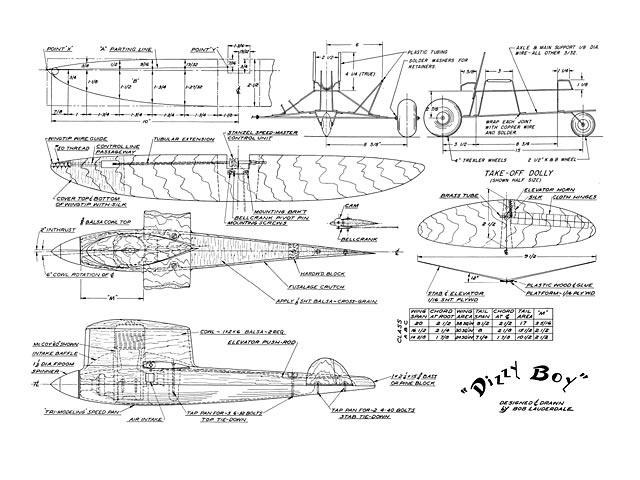 Quote: "Withholding nothing, the designer gives all the dope on duplicating his record-smashing Dizzy Boy. Engine modifications, fuels, props, the pan. It's a Mono-Line speedster. Dizzy Boy, by Bob Lauderdale.

Dizzy Boy was designed to use the Mono-line Speed-Master controls made by Victor Stanzel & Co. It also incorporates design features such as completely housed control unit, staggered speed wing and offset pressure cowling. A high speed or record breaking flight will depend on how carefully you build in these design features.

My Dizzy Boy has flown five times. The test flight was on 77 ft lines and clocked 153.76 mph. The second flight was during the Wichita contest where Dizzy Boy pulled me off the pylon and no official time was made. The third flight was at the 1955 Nationals with a speed of 164.56 mph. For the fourth flight, a 9 in dia, 12% pitch propellor was used. Fuel was Farabend's This Is It - hopped up - and the engine was a McCoy .60. The speed was 168.47 mph. The fifth flight was at the Southwestern Championships in Dallas where Dizzy Boy turned just over 165 mph. In this contest John Belveal of the Tulsa Speed Team flew his Dizzy Boy for a new Senior record of 158.11 mph.

Dizzy Boy uses a Champion pan made by Tri-Modeling of Mesquite, Tex. The outside curvature of this pan' is better suited to higher speeds. To start construction, note the end of this pan is about 1/8 in thick. File this to a sharp edge, with all filing on one side only. Start 4 in from the end and file to blend with the reflex in the pan. The rest of the pan should then be filed smooth and sanded with wet or dry sandpaper, then polished. The pan can now be drilled and tapped for the four 6-32 engine bolts. Use a No.33 drill to drill the holes. In locating these holes, allow for the left thrust angle shown on the drawing.

The fuselage crutch is made from a finished blank of basswood 15-3/4 x 2-5/16 x 1 in. Using the pan for a guide, pencil a line around the pan onto the blank. Cut out with a jigsaw or handsaw, then sand until it matches the pan. Now remove the inside portion of the blank as shown by the dotted lines on the drawing. Now measure 3-5/16 in back from the front of the crutch and cut a notch 2-1/2 in long on each side. This notch should be 1/8 in deep at the front and 5/32 in deep at the rear. This forms the positive angle of incidence for your wing. The small wing area makes this very important as an extra amount of lift is gained here without appreciable increase in drag of the wing planforrn.

The elliptical speed wing should be laid out on tracing paper and used as a pattern. Follow dimensions shown on the drawing which are to the nearest 1/32 in. Use a French curve or 1/16 sq balsa to connect the points. Lay out the left wing and fold the paper on the center line arid trace for the right wing.

Select a piece of good quality Northern Basswood or white pine for your wing and cut a block to the required dimensions 20 x 2-9/16 x 3/8 in. Cut out the notch for the control unit and locate points X and Y. Draw a line through these points and cut along this line to form parts A and B. Parts A and B are then spot-cemented together again to allow shaping of wing; when completed, wing must again be parted along line X-Y for installation of control unit. The pattern is now clear-doped to top side of blank, Cut out wing, using the pattern as a guide, then sand around the wing form, removing all the rough saw or cutting marks. When cutting out the wing, allow enough wood for sanding and blending the points on your pattern with a nice curve.

The wing is left flat on top and tapered on the bottom from 3/8 in at the root section to 1/8 in or thinner at the tip. After the wing has been tapered, carve the airfoil section, which is 2/3 thickness on top and 1/3 on the bottom. Using a sanding block, shape the airfoil from a lifting section at the root and progress to a symmetrical section at the tip. A slight amount of washout should be sanded into each wing panel, starting 3 in from the tip.

Remove parts A and B and with a grooving tool cut a channel in the forward edge of part B and the rear edge of part A. Keep this groove centered in the wing section and make it large enough..." 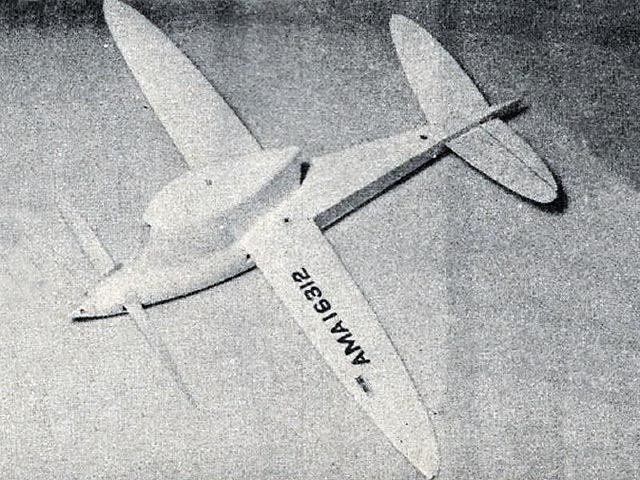