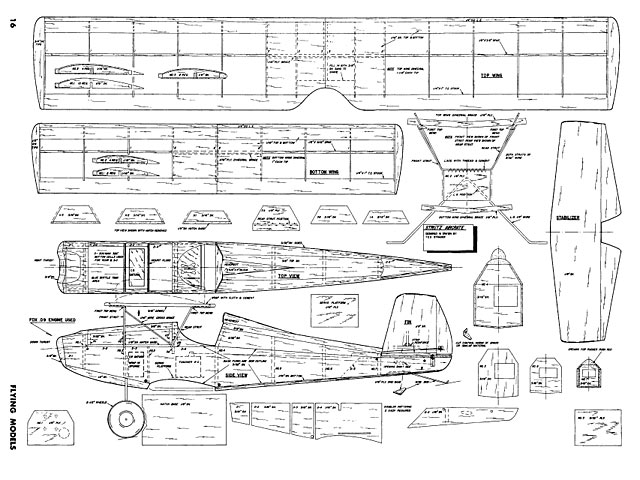 Quote: "In the biplane department we tend to favor the Duet (oz4109) style, with its small bottom wing and full turtle-deck back. A couple years ago, however, during a frequent sketching session, a simple design evolved, which was quite an abrupt departure from the bipes we sketched before and since.

It appealed to us though the lines were very straight and, in places, severe! A few exploratory sketches of this boxy type were made to note the effect of different element outlines on the overall appearance. When the composite design was finished, it had changed little from the original sketch and all we could muster as far as a reaction, was that this looked like a crate with struts! The final sketch was tagged Strutz 'Aircrate' and returned to one of the many books of similar future projects we keep on a high shelf.

In the little over two years that followed we occupied ourself with several projects far removed from the Strutz design. Our closest brush with it would be passing while on the way to other configurations in the same book.

Then about 6 months ago the great circle seemed to have been made and once again our attention turned to the biplane design. A biplane would be next! A drawing board was prepared, tools assembled, pencils sharpened, a sketch book opened, the finalized desigh removed and we were under way.

About two days and 20 cups of coffee later it was done. 90% of the engineering completed, only a few minor details remained to be ironed out during construction, but the plans were complete enough to begin glueing parts. Vital statistics: Top wing 50 in, bottom wing 36 in, Power .19-.35. Name: 'Super Duet', naturally. After all it looked like the old Duet and was a transitional design.

What happened to the Strutz? We hadn't even given it a thought! It would probably still be firmly entrenched in a sketch book, if a bit of that 90% of engineering which is usually taken care on the original plans, showed up instead, in the almost finished frame! We're kind of happy it did appear, because when the 'Super Duet' is finally finished, it will be a much stronger ship, with no change in appearance. These ideas will also be incorporated in what we hope will be the bipe to end 'em all our 60/40 inch Corona for .35-.45 engines and 8-10 channel Multi. The 'Corona' will end a 14 year period of similar bipe sketches numbering almost 200! We hope you like it.

Meanwhile, back at the bench! Our sights were set on a bipe, but so much time had been spent on the 'Super Duet' that we wanted a change. From the intricate complexities of before, we moved to the utter simplicity (it would seem) of the Strutz design. Here was the kind of ship which could be put together in a couple of evenings. The plans were simple yet functional. Now that the model is finished, the plans are still simple, the design functional, but the finished model no more resembles the original sketches than it does the Duet series. And it will take a little more than two evenings to build!

The layout, however, is the same. By merely substituting thicker wood sizes for the fore and aft portions of the fuselage top, and sanding to contour, the entire design got a 'face lifting.' We must admit we like the finished product much more than the original sketch! We have taken our little 'Strutz' to several contests for display, and it has attracted a lot of nice comment.

The design is basic as well as construction. Our finished product weighed in at 30 oz which gave us just a little over 12.5 oz per sq ft. The Fox .09 engine with a 7x4 prop is more than ample to 'haul the mail' from a standing start, through ROG on a reasonably smooth surface. The flight shot shown was ROG, from a gravel road bed.

In the radio room we have an F&M Electronics (CG) Saturn under contract decoding our messages and relaying the information onto the 5-C servo. This gives us full Right-Left-Up-Down. We had planned to use the 'Blip' circuit and install an escapement for a throttle clapper in the removable hatch but never quite got to it.

The cockpit area is large enough for any of the available escapements from SN to compound and several types of servos. When properly balanced it is surprisingly stable for a bipe and can be test glided with ease. If it glides in a well defined straight path with no tendency to flair out and balloon, then you're about on the money. Ours did balloon a little and we thought we might have thrown it a bit too fast. The first flight indicated it was a bit tail heavy and also proved the design was rugged! It hung on the prop for a few moments, then we brought it in for a three point landing - both top wing tips and the rudder in that order! The only damage a little dust in the engine.

Once the balance was shifted the glide was improved to a point where every attempt was successful regardless of what amount of thrust we gave it, provided the ship was at least up to flying speed. A little more downthrust was added to the engine and the result is as seen in the ROG shot. Those wishing to fly theirs on Rudder-Only should encounter no difficulty as the landing gear is positioned just right for hands off ROG, also the ship is stable enough to be flown with only rudder. Devotees of the kick elevator school will have the advantage of being able to pull it up out of the weeds! We're planning on installing Galloping Ghost in our next one..."

Article, thanks to MichaelR. 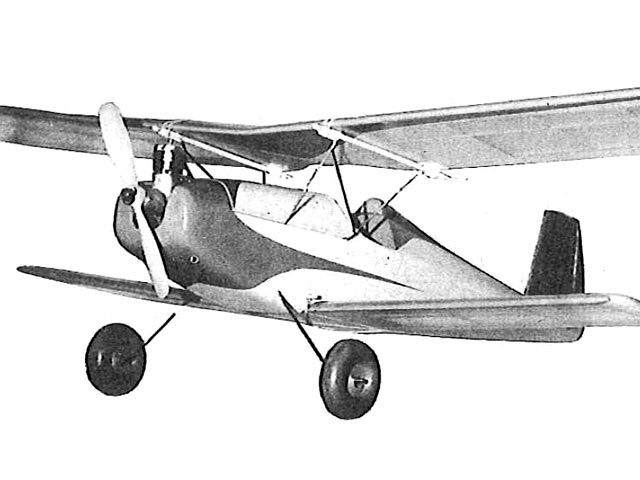