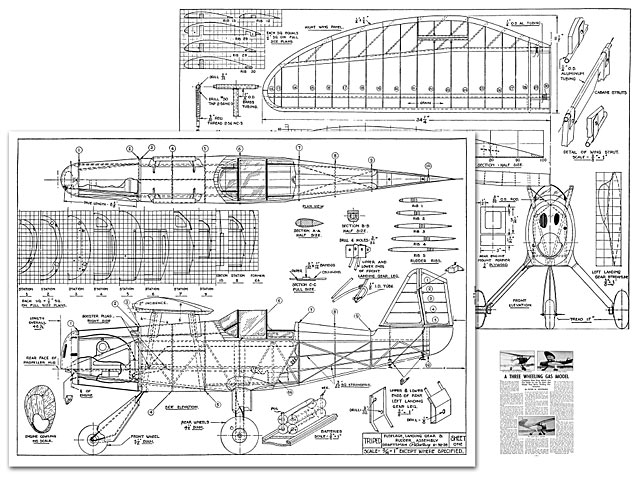 Quote "Complete Data From Which You Can Build An Up To Date Gas Model That Gives Thrilling Performance. Thre Wheeling Gas Model, by Peter W Westburg.

THIS gas model was designed primarily as an experiment to test the adaptability of a tricycle landing gear to a gas model. Except for this innovation, the model is quite orthodox in construction and closely follows the methods which we have so far successfully used in previous models.

You will experience a new thrill watching the landings of this model. In the conventional model, too steep a glide very often leads to a very badly damaged nose or engine and usually a broken propeller. In this three-wheeler, the front landing gear wheel protects the propeller, engine and nose of the plane and as a result there is very little or no damage to the plane in landing.

If the rear landing gear legs are moved from 1-1/2 inches to 2 inches farther forward than is shown in the plans, you will get better and quicker take-offs. This is a matter of choice. If you decide to move the landing gear legs forward, a few minor changes will be necessary in the size and location of Bulkhead No. 6 and the uprights, diagonals and crosspieces adjacent to it.

Originally powered by a Baby Cyclone, the model performed well enough, but later a Brown Jr was installed which considerably increased the performance. With the Brown Jr we had better takeoffs and a higher rate of climb.

While this model has a rather high wing loading, it is a very stable flyer and also quite fast.

In making this model, follow the plans closely and do not deviate unnecessarily from them. Pay especial attention to the construction and alignment of the cabane struts and the front wheel.

Since the fin and rudder is the easiest single unit to make, we will begin construction with them. The leading edge of the fin is 3/8 by 1/4 in. Make the triangle consisting of the leading edge, the rudder post, and bottom rib (5) and insert all the other ribs which are of 1/16 thick balsa. Both rudder posts are 3/8 by 1/4 in balsa and are broken at the point where rib (2) intersects them. Make the rudder in the same way and cut the slots for the 1/8 by 1 in brass strip hinges which are glued to the rudder ribs (2) and (4).

The tin fitting is cut from a blank 1/4 by 1-3/8 and two small holes are drilled in the tips for the tail wires which are of No.24 tinned wire.

If you care to, glue small triangular blocks in each corner of the fin and rudder and sand to a curve as shown. These eliminate wrinkles when covering, but are not absolutely necessary.

Make the upper fitting for the stabilizer adjustment mechanism first. It is simply a (T) made by soldering a stem of 1/8 OD brass tubing 5/8 long to a bar of tubing which is 7/8 long. The stern is drilled with a No.50 drill, then tapped with a 2-56 NC-3 tap. The bar is drilled 3/32 to receive a 3/32 rod. The whole is bound and cemented to the spar. A shallow notch is cut out of the spar to allow free movement. A similar fitting is made for the front shaft and is bound and glued to the front piece which forms part of the leading edge of the stabilizer.

At this point, put in the front piece with the fitting bound to it and the center piece of the trailing edge. Ribs (6) are next put in, the top and bottom surfaces between these ribs being covered with 1/32 balsa. The bottom surfaces must have two rectangular holes cut out for the fittings..." 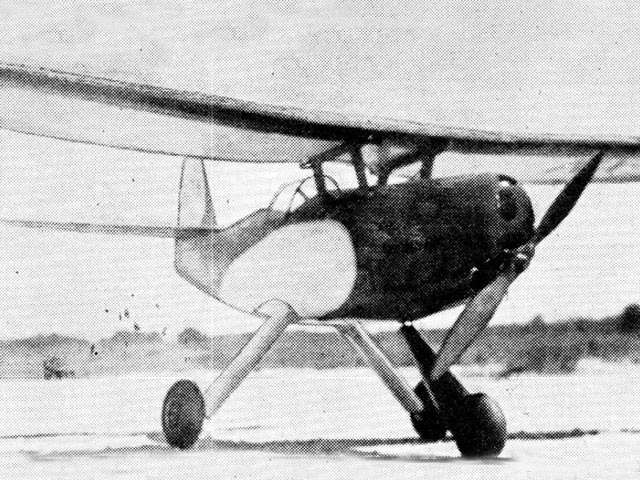 Where can the modeler get the rest of the construction article for the Triped as a lot of information is missing on the plan. Such as wood thicknesses, wire diameters etc. Would love to build one but not enough info provided on plan and rest of article is missing. Can you Help? Respectfully, Keith S.
Keith Sterner - 23/09/2019
It's your lucky day, Keith. Have added the full article now.
SteveWMD - 23/09/2019
Add a comment