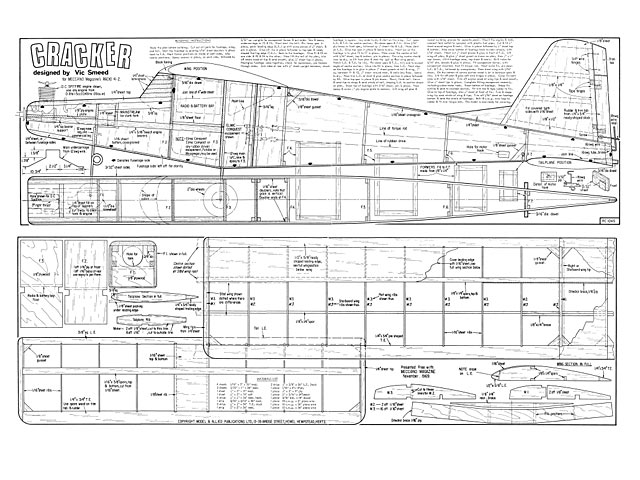 Quote: "ALTHOUGH THIS model is fairly typical of simple rudder-only R C aircraft, it has a number of features designed to simplify construction and flying and to make it economical to build while still retaining an attractive appearance. As an example, apart from the ribs, cabin front and fin top, there arc no curves to trace - everything is straight lines and any other 'softening' curves are sanded in.

The structure is strong but light, in order to keep flying speed low but survive rough landings, etc. The target weight for the prototype was 26 oz all-up; with an empry fuel tank it came out at 25-1/2 oz but the model will still fly well at 32 or even 36 oz. Although intended for simple rudder-only control, it can be built or converted to rudder and throttle or rudder, throttle, and elevator by builders with a little experience.

Construction is quite straightforward and any puzzling points from a study of the plan should resolve themselves as building proceeds. A building sequence is given on the plan, but these notes amplify one or two points.

Each fuselage side is a 4 in sheet with the corners sliced off and one butt-joined on the top edge; the joint line is shown on the drawing. Cut the sides to shape, then add the 1/16 sheet inside from F4 forward, grain vertical, using contact cement, PVA glue, or balsa cement. Make sure one is left and one right.

The notes on the plan cover assembly, but note that the engine bearers are tapered at the from to tilt the engine mounting plate downward saw and/or plane this taper before assembly. The inside details of the nose are shown in the photographs.

Use soft 1/4 in sheet balsa for the blocking around the nose area and the cabin front, and cement all pieces in place before carving and sanding down to the pleasantly curved appearance shown in the pictures of the finished model. Fuel-proof the inside as you go, to prevent later oil soakage weakening the nose.

One point - fret out a little hole in F3 (as in one of the pictures) to enable the plug from the escapement to pass through to the receiver. The size will depend on the equipment harness used, but in any event it should be sawn before assembly.

The wing is built around the ply dihedral brace, so make sure this is accurate. One wing panel is drawn, and the second can be built over the same drawing, as shown by the dotted lines and italic lettering, by just putting the centre-section at the other end..." 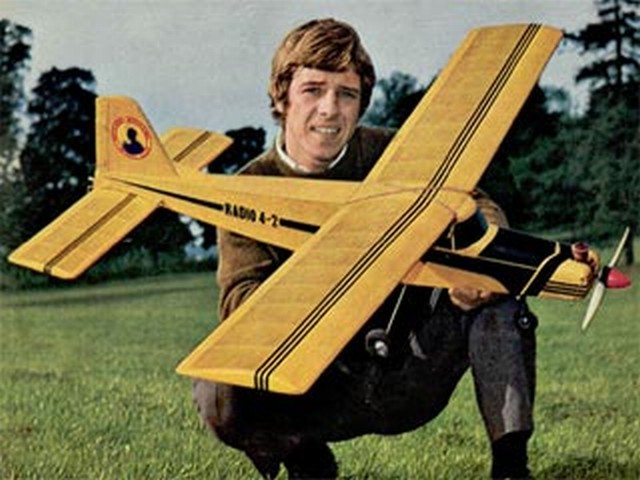