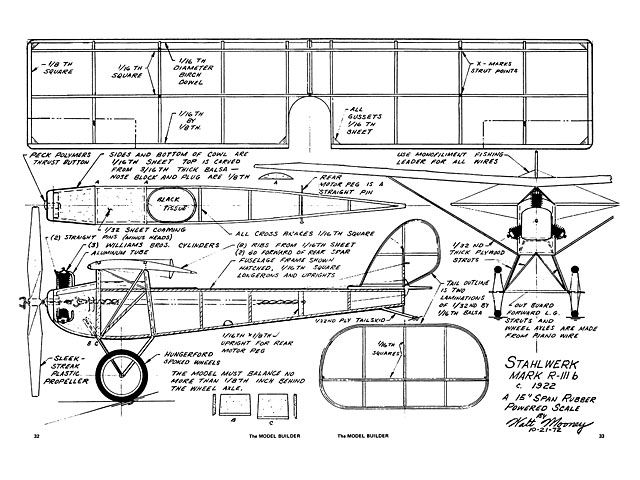 Stahlwerk R-IIIb. Scale rubber model, built around some handmade Fulton Hungerford spoked wheels. The Stahlwerk R-IIIb at 15in span. A homebuilt from the 1920s.

Quote: "I built this model in 1988 and gave it to a friend before leaving to move to Singapore. A few months ago he came to visit me and brought the model back - it had been sitting on his bookshelf all that time. I recovered it and have attached a photo. The text is worth reading for Walt's unique method of tightening the monofilament rigging. After installing the lines, he holds the model over the kitchen stove, and the heat shrinks them, hopefully without igniting the airplane! I've never heard of that one before".

Quote: "What true modeler hasn't, at some time or another, started with nothing more than a pair of wheels, and built a whole airplane around them? This little parasol is a natural for rubber scale. Stahlwerk, by Walt Mooney.

This is an airplane that I had seen pictures of from time to time over the ears, but had never had a three-view from which to make a drawing. Thus, as a model, it was put off for years. When Fulton Hungerford came out with his spoked wheels, I got hold of a pair of them and spent some time looking for the ideal scale to put them on. Not too long ago, in a Polish magazine, I found a three-view of the Stahlwerk monoplane, and in no time, this model was in the works.

The Stahlwerk is a classic configuration, first conceived during WWI and still being built today by many home-builders, in the form of the Pietenpol and the Baby Ace. The high wing parasol monoplane has been with us almost sixty years, so I suppose it's sale to predict that it will still be built as a full size aircraft as long as homebuilders continue to want to build cheap, safe, open-cockpit airplanes.

The Stahlwerk is something of an antique; it was flying in 1922. It obviously used war surplus wheels and they look overly large for the airplane, which adds to the model's charm. The three cylinder, uncowled motor allows cylinder detail on the model without making the motor the major part of the project.

This model was built out of my scrap box. It was surprising how little mater-ial it actually took to make it. Six pieces of one sixteenth square eighteen inches long, one piece of sixteenth by eighth, fifteen inches of one sixteenth dowel, a few square inches of thirty second and sixteenth sheet, a couple of small blocks of eighth sheet, a foot of thin piano wire a piece of sixty-fourth plywood (one inch wide by six inches long), wheels, cylinders and prop, a quarter tube of cement or less, half ounce of dope, same ol thinner, two feet of monofilament line, two square inches of black tissue, and about a third of a sheet of white tissue will do the lob and leave a little to put back in the scrap box.

The use of a plastic propeller, Hungerford wheels, and Williams Brothers cylinders simplifies the job. Total time on this model, including the drawings and this article, but discounting water and dope drying times, which took place at the end of a building session, was twelve hours. My actual building time was eight hours. Of course, I was pushed a little by my illustrious editor's schedule, and even so I probably delayed it a little.

The model flew right off the board with low power, but with more winds it required a thirty second shim of down thrust and about a thirty second of down elevator to keep the model from stalling under power at the beginning of the Hight. The landing gear is pretty far aft, but even so all takeoffs are easy. The model shows no tendency to groundloop and on smooth surfaces it lands beautifully. The least little obstruction results in a nose over, but because of the light weight the model is immune to damage from flight-caused accidents. The best flight to date..." 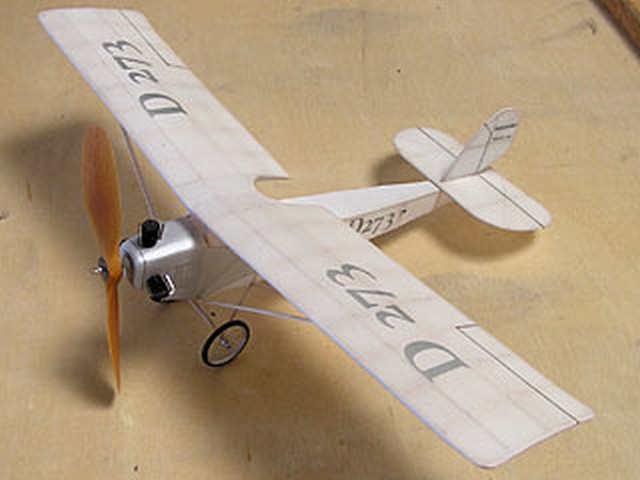 Hi Mary and Steve, In the winter of 1983, I built a 30in WS version of Walt’s Stahlwerk by doubling the size of his plans, for our club’s Spring 1984 Fly-In. It was a great flyer, and on its third flight, it went OOS (out of sight). Oh well!
Several years later, I tripled the plans to a 45in WS for RC. I built the wings and empennage, however, due to illness, I never completed the fuselage. Last week, I got the project out from storage, and I am redesigning the fuselage for electric. I am looking forward to completing this model for this years flying season.
rocketpilot - 28/03/2020
Kindly allow me a correction. That airplane was not Polish as told. It is true the manufacturer Stahlwerk was based in Breslau, nowadays Wroclaw/Poland. But at that time in the 1920s that territory Silesia was part of the German Reich. Breslau became Polish only after 1945. The R in the Name of the plane stands for its constructor Walter Gustav Rieseler (1890-1937) who was born in Burg/Magdeburg. You will find more information on him and on the Stahlwerk R IIIb when you Google his name and/or the original specification of the plane Rieseler R IIIb.
RobertS - 29/03/2020
Thanks Robert. Have changed the wording on this plan listing now :)
SteveWMD - 29/03/2020
Add a comment