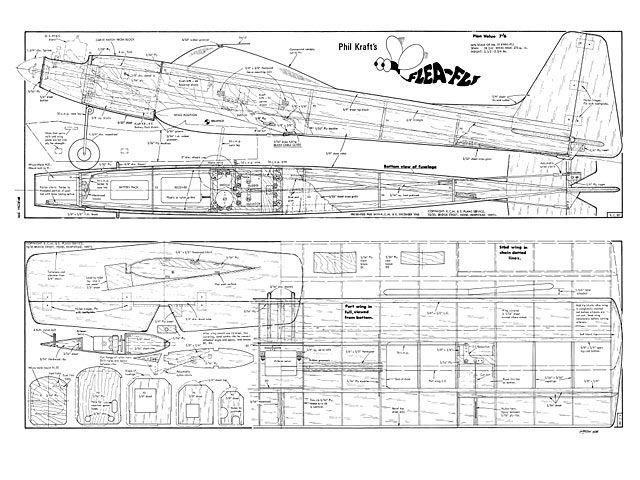 Quote: "Models of models - why not? Perhaps this will be a new trend in R/C. Certainly, the Flea-Fli is an eye-opener as far as performance is concerned. Its characteristics are very similar to the large Kwik-FIi III (oz7431) on which it is modelled, although it is faster. As far as contest flying is concerned, it scores very well in most manoeuvres, losing out, however, in these when overall smoothness is a factor.

For sport use or contest training, it's tops. I think it is really fun to fly and its advantages are obvious. It is less expensive to build and easier to maintain; good .19 size engines are plentiful and the 12-minute engine run on only four ounces of fuel is a real economy. It fits in the smallest of mini-cars fully assembled and despite its small size it is not exclusively a fair weather machine. I have flown demonstrations in winds of 45 mph.

Weight is not a problem. Ours have ranged between 2-1/2 and 3 pounds, with no effort expended toward light-weight construction - the KP-4B proportional system installed in the prototype weighs just over 11 ounces. Admittedly, you may have a bit of trouble fitting more bulky systems in the space available, but if radio size and weight looks like becoming a problem, then try just aileron and elevator controls - these are basically the only controls you require, like Geoff Franklin's Pylon Duster (remember it?).

Construction is no problem at all - it's just like a big multi model only there's so much less of it. The steerable noseleg assembly requires a little bit of home fabrication, but is not difficult to make as the picture right shows. Flea-Fli is quite capable of the entire FAI acrobatic schedule using full-house proportional radio, which it will easily carry..." 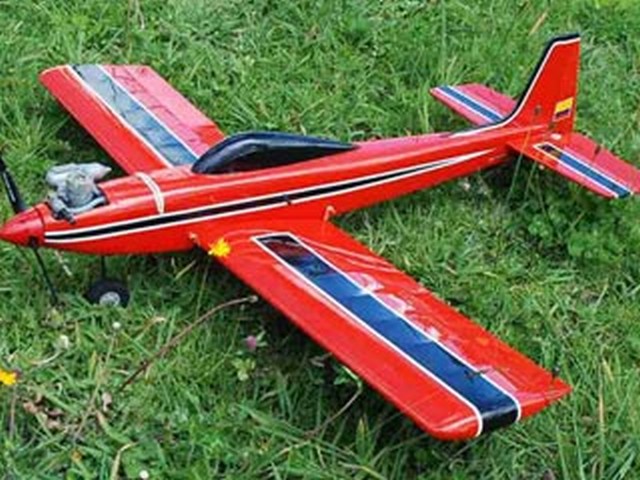 The Flea Fli was originally published in Model Airplane News and then given as a free plan in RCM&E. Please check some photos of my Flea Fli. Flies beautifully with a Chinese ASP .21 engine and my old trusty Futaba.
Eduardo - 19/09/2012
Add a comment