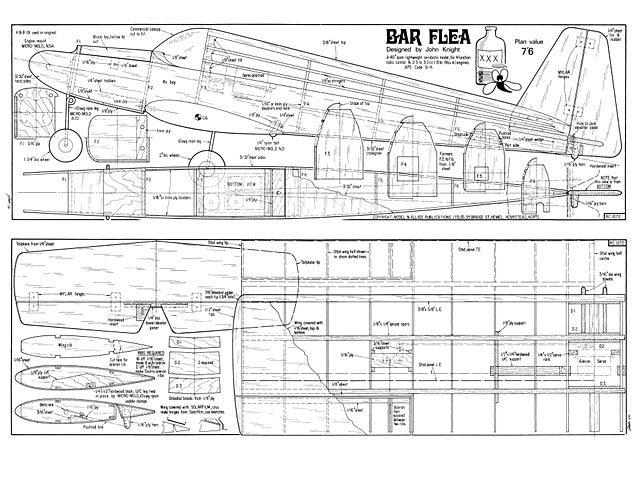 This is not a beginner's model, quite the reverse in fact, since this little number really demands reason-able experience with acrobatic type R/C multi models and good reflexes. Prototype No.1 died early through my own incompetence - inverted at 30 ft, and applied up elevator instead of down - ouch. (Rather bad habit for serving RAF pilot - Ed.) No. 2 model was shot down by interference (monitored American voice transmission).

Both models used K&B 19 R/C power, driving an 8 x 8 in nylon prop. Running on KK. Nitrex 15 fuel, both prototypes would hold pace with a 61 powered Thunderstormer (oz9052) straight and level (to coin a phrase Mr Russell), which in my estimation corresponded to a speed of about 80 mph, so this little fella doesn't exactly drag its heels.

Construction is pretty straight-forward but here are a few useful pointers which may help. To help keep the weight as low as possible, balsa replaces ply in many places where the latter is normally the accepted material, for instance, the dihedral braces are balsa and I've never had a failure yet using balsa instead of ply here. Undercarriage blocks are not grooved - 10 swg mainlegs are clamped on with Micro Mold nylon saddle clamps. Even in the write-off of model No.1, the main gear was in one piece and installed in model No.2.

If you like, you can use 1/16 ply all the way along the tank bay floor - the ply is to stop the nose wheel entering the fuselage on a good 'bounce'. You might also try putting 1/8 sq strips along the inside of fuselage bottom corners aft of the wing to allow rounding of the bottom of the fuse. Dowel and rubber band wing fixing is, obviously, an alternative to the nylon bolt type shown.

Radio installation must, naturally, be arranged to suit your equipment. My models used Bonner RS radio, but the Kraft KPS-I0 servos shown on the plan are typical of modern lightweight radio installations. In any case, your arrangement must be made to preserve correct balance and on mine, the power pack was situated vertically behind F3, elevator and rudder servos in front of F4, with the Rx between DEACS and servos. (All set for a nice transistor sandwich in the case of a prang, but in the little ones, your options are limited - Ed.) Motor servo was fitted between F2 and F3 because I build nose heavy!

Finally, limit the aileron and elevator travels to 1/4 in up and down initially, and in the case of the ailerons, afterwards too! I doubled the aileron movement on No.2 model which produced a roll rate like an RAF Gnat jet trainer, but it was just not comfortable to fly. 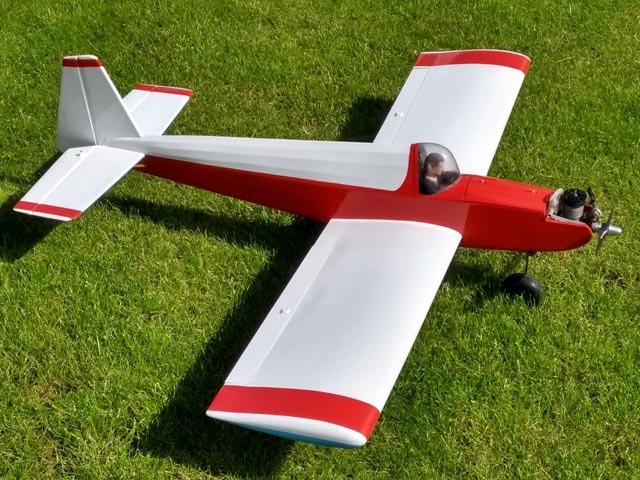 Hi Mary/Steve. I hope you are both well during the current craziness and so glad you're keeping up the good work on the Outerzone collection. It's much appreciated. I thought you might like some photos of my rendition of John Knight's Bar Flea [main pic, 003-007], built from the original free plan, which, despite being printed on the cheapest orange paper I've ever seen, still survives 50 years on!
My version started as a trike as per the plan, but was subsequently converted to a tail dragger after the failure of a 3D printed plastic main undercarriage mount experiment! Ground-handling is fine on our club grass strip.
I didn't have a suitable commercial canopy to hand, so carved a plug and hand pulled some acrylic sheet to shape with help from a heat gun. A carved and painted balsa pilot is installed, to blame for any dodgy landings!
The AP 12 motor shown in the pictures was a bit unreliable, so has subsequently been replaced with an OS 10 FP, which, despite being half the size of the original spec'd motor, powers the Flea through manoeuvres very adequately.The thick wing slows the model down nicely for stall-free landings.
The colour scheme is courtesy of Solarfilm, with the mid blue undersides showing up remarkably well, even against a clear sky.
With best regards,
RogerT - 22/06/2020
Add a comment