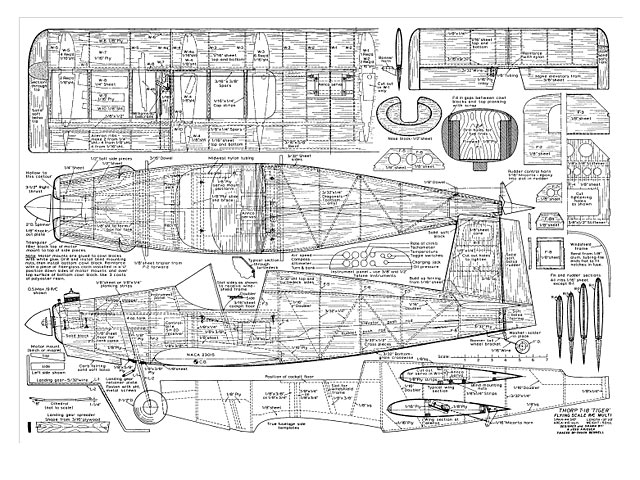 Quote: "The poly-dihedral wing, with eight degrees of dihedral in each outboard panel, is a major factor in stability in to and is also one of the characteristics of the ship that made it attractive as a model project. Our model of the Thorp Tiger is very accurately to scale, at 2-1/8 inches to the foot, and with the exception of wheel pants, is patterned after the original, built by Bill Warwick. I have adhered faithfully to scale throughout, with Only a few minor deviations. Areas of all flying surfaces are to scale, with the scale-size stab, which is just a shade over 15 percent of the wing area.

Only three concessions to scale were made in the entire ship. First was in the airfoil section used. Designer Thorp used one of the modern laminar flow sections, but I chose the NACA 23015 for model purposes. This section has an almost negligible pitching moment, making it very nearly neutrally stable, and has an extremely small center of pressure travel. These two characteristics make it an essentially stable section, that can get by with a minimum of stabilizer area in the tail end to keep the wing airfoil in a stable pitch attitude during flight. Therefore, I thought that this section would enable me to get by with the scale horizontal tail area without any loss in Longitudinal stabilily, and with no penalty in scale points from enlarging the area.

Second concession to scale was in the use of an elevator, instead of the stabilator used on the prototype. I did this for obvious reasons, as the stabilizer-elevator set-up is easier to build, and stronger for model purposes. I followed the very same configuration as on the prototype, but simply enlarged the anti-servo trim-tab into an elevator. The third concession to scale it in the tail-wheel assembly. Here I used a Bonner mounting bracket for convenience and simplicity. But since home-builders all have their own pet habits, and there may be a variety of tail-wheel systems installed on Thorp Tigers, perhaps this can be overlooked as an unimportant deviation from true scale.

One final word before beginning the construction. If any of you have been complaining about not having enough room for installing radio equipment in the fuselage, this is one problem you'll never encounter with the Tiger..."

Remainder of the article text pages. 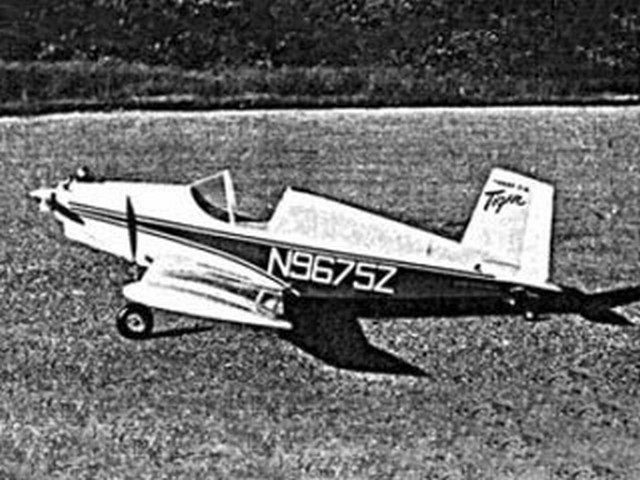 Just wanted to drop you a line and let you know the Thorpe T18 Tiger plans are awesome and so is your web site, just an FYI concerning these plans though, the written portion of the article is Continued on page 68 but not scanned and included..
Nameless - 03/06/2013
Add a comment