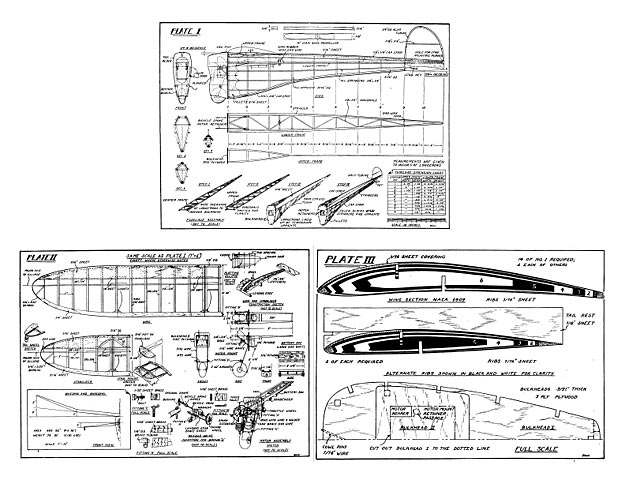 Record Hound. Free flight gas model. From August 1939 Air Trails article. "The ship that won the 1939 NAA record during the winter with a three flight average of 5:41"

Quote: "CAREFULLY designed for high performance, easy servicing, and thorough protection of vital parts, this ship is ideal for both contest and sport flying.

The single-wheel arrangement has many advantages, chief of which is a great reduction in drag, as the motor and landing gear can be completely housed within the fuselage itself, without exceeding the cross section required by the NAA rule. Though inverted, the engine cannot be damaged by striking an obstruction or nosing over. Last, but not least, a considerable amount of weight can be saved and incorporated in the rest of the structure for greater strength. (Could it be that two ships can be built from one pair of wheels?)

A comparatively high thrust line, long tail moment arm, and large stabilizer area aid the ship in assuming and maintaining its own most efficient attitude. Generous polyhedral in the wings and slight anhedral in the tail work for spiral stability: After watching many a juicy spiral, it seems that the tail swings outward, increasing the angle of attack on that portion, helping to rotate the rear of the fuselage. Anhedral in such a situation creates just the opposite effect, producing a righting tendency.

The wing area has been kept as small as possible without skimping weight on the motor unit, or exceeding the minimum NAA weight rule of 8 ounces per square foot, to attain the fastest climb and lowest sinking speed possible. These desirable qualities were exhibited by the original at its first contest by flights of 3 minutes, 19 seconds and five minutes, 40 seconds on a 19-second motor run. In calm air the altitude reached with this motor run has been determined to be actually 300 to 400 feet, resulting in a power to glide ratio of over 8 to 1..." 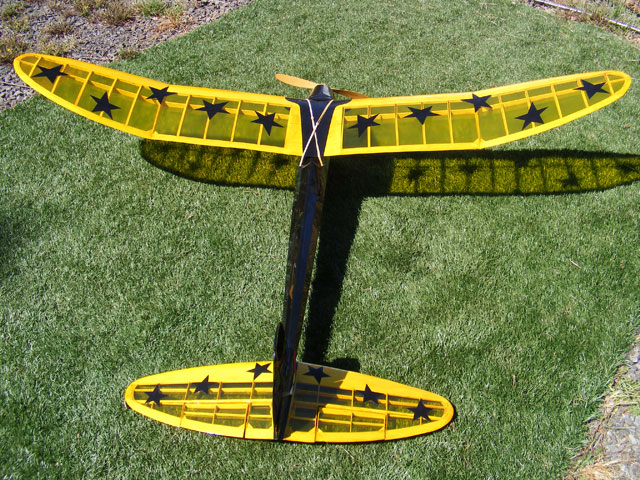 Hi Mary and Steve - As promised, here are some photos of my Record Hound, converted to R/C assist [model photo & morepics 005-008]. It is powered by a Turnigy G25 turning a 13x6 prop, 50a ESC and 2200 3s lipo battery. It weighs in at 3 lbs. 2.2 oz. and balances right on the indicated plan CG. Covering is black super monokote and Hobbyking transparent burnt orange. Stars are hand cut from the black monokote. Thanks for your wonderful website. I check it daily and have put many plans on my to do list. Your efforts are greatly appreciated for us all who endeavor to keep this hobby alive. Chuck Johnson. Umpqua Valley Modelers, Oakland, Oregon.
ChuckJ - 17/08/2019
Add a comment