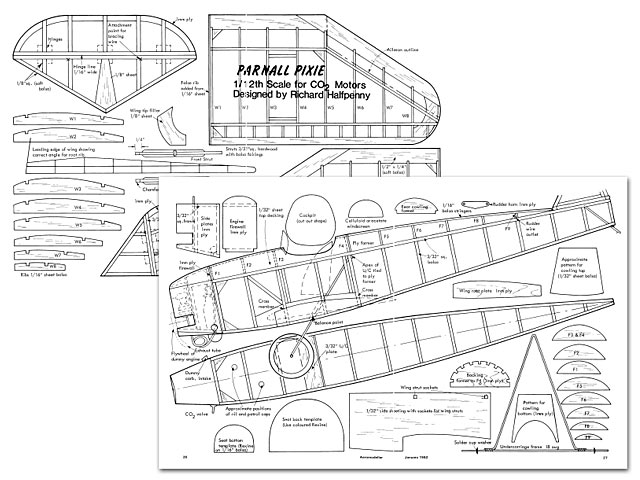 Quote: "AT THE END of the Great War, having previously sub-contracted to other makers, Parnall Aviation of Bristol were producing their Panther Naval reconnaissance biplane. This chunky little two seater was one of the first aircraft specially designed for carrier use. Unusually the fuselage folded, instead of the wings, for stowage, and it was fitted with flotation bags. and a hydrofoil, to ease accidental 'ditching.' Quite a number of Panthers were built, and some of them were sold to the Japanese Navy, which was then building up its aviation, under British guidance.

Another venture, in 1923, was the Plover. A single seat fleet fighter, it was meant to compete with the famous Fairey Flycatcher, which it quite resembled in appearance. Unfortunately, the Plover did not compare with its rival for rugged construction, and there was only a small production run.

Our Pixie was also built in the same year, for the Lympne Ultra Light Aeroplane Trials. More of this later, but mention must be made of what many would regard as Parnall's piece de resistence. This was the Peto floatplane. A small two seat biplane, appearing to be dwarfed by its own large Armstrong Siddely Mongoose radial engine, the folding-winged Peto was built to fit the hangar of submarine M2. The first aircraft-carrying submarine in the world, M2 had been converted from one of the still mysterious Monitor submarines, which were themselves built from the last K Class steam submarines. M2 could catapult her aircraft, and the Peto could return to her in calm weather. Otherwise, the aircraft's two hour endurance enabled it to fly to a shore base. After about five years of experiment, M2 foundered, off Portland Bill, in 1932, with tragic loss of life. It was believed the hang door was opened too soon after surfacing, and water that must have been rolling over the foredeck rushed in.

Now for the Pixie. There were three main competitions at the Lympne Trials. One for fuel economy; one for climbing ability; one for speed. The Pixie, designed by Harold Boland, was prepared as a composite aircraft. with two alternative engines, and two sets of wings. With the larger wings, of 28 ft span, and smaller engine it would be entered for economy. The same airframe, fitted with the larger engine. would compete for climb. The combination of large engine, and small wings of only 18 ft span, would be for speed. There would have been no point in coupling the small engine with the small wings: this would have been the worst of both worlds.

The larger of the two Douglas engines, a little under the Trials cubic capacity limit of 750 cc, was rated at six horse power. Indeed, the smaller engine was only rated at three and a half. This was a purely nominal assessment however: most probably the larger engine developed at least 30 brake horse power. Since these were basically motorcycle units, they were placed under the propeller shaft in the aircraft, which they drove by reduced gearing chain drive. What appear, in photographs, to be rocker boxes, were actually lubrication reservoirs for the open valve gear, which they were supposed to keep oiled, via wicks.

Although the Pixie, looking like a miniature Spitfire, attracted great interest, it did not shine in the economy, or the climbing sections of the Trial. However, it won the speed competition, reaching 81 mph. Curiously, when fitted with the large wings it was known as the Pixie I, but in its 'racing' version it became the Pixie II.

Despite this success, the machine was obviously underpowered, and a Blackburn Thrush engine, of 36 horse power, was later tried. This was an inverted vee twin, again much like a motorcycle unit. In this form the Pixie appears to have been doped aluminium, and it had red, white and blue stripes on its rudder, with the red stripe at the rear. Similar to service fashion, it had the serial number J7323. At that time Parnall were trying to market it as an inexpensive air force training machine. It was not adopted, but the Blackburn-engined version did some further racing.

Subsequently, an enlarged two seat version of the Pixie was built. Known as the Pixie III, this had a still larger, three cylinder Bristol Cherub radial engine, and the simple steel tube undercarriage of the early aircraft was replaced by an oleo type. And, for increased load carrying, this one could also be rigged as a biplane!

Those wishing to know more about the Pixies should read the feature on them by Kenneth E Wixey in Aeroplane Monthly for October 1980. This provided the inspiration for me to build the model.

Building the fuselage: Build up the fuselage basic framework in the usual way, from 3/32 (2.5mm) square balsa strip. Make sure the 3/32 sheet infilling for the wing roots is added before lifting from the plan, as it prevents the sides from 'springing' out of shape.

When adding the cross members, note that three of these. at the bottom of the fuselage, are of 3/32 sheet. They support the undercarriage and wing roots, and their depth and positions,are shown on the side elevation drawing. Cut the nine top decking formers from (1.5mm) sheet balsa, and the one plywood one, which supports the apex of the unique Pixie undercarriage, from 1 mm ply. This is the only former notched for the stringers.

When the formers are all in place with the plywood one glued to the back of No.4, and notched between the two top longerons, try test laying a piece of square balsa strip from here to the tail end. If it describes a smooth curve, all well and good. But, if it does not, sand down, or pack up, respective formers until it does so. Now the seven stringers can be added, making sure they are spaced evenly around the circumference of the formers, as well as being notched into the plywood one.

Sheeting of the top, forward part of the fuselage must be done with care. 1/32 (.75mm) balsa is used here, for lightness. If balsa cement, or clear dope, are applied here, they may cause distortion and shrinkage. The cockpit may be cut before, or after assembly. To get a pattern for the forward parts, try bending a piece of paper around the formers, and tracing the framework on it with a pencil..." 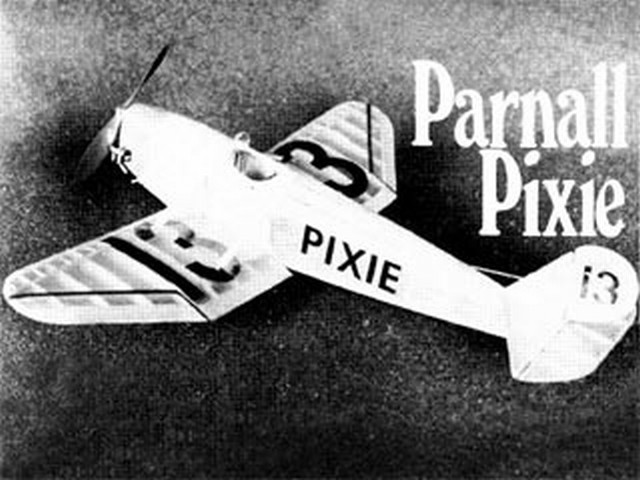