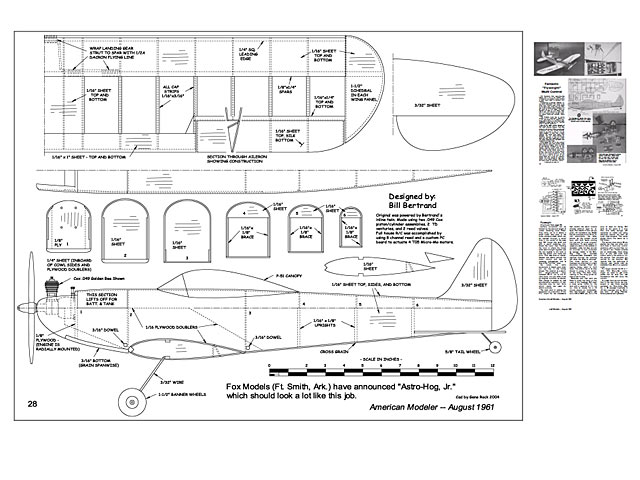 Update 29/01/2020: Have re-named this listing as Mini-Hog. The previous name of 'Astro-Hog Jr' was I think less helpful.

Bill Bertrand's little Astro-Hog-like beauty was a hit at the Buffalo R/C Conference. Its unusual control system is pretty much based on standard components.

Construction is radically different, being much simplified. The plane is not much more complex than a sport gassie of the same size, aside from the addition of the movable control surfaces. All tail units are of 3/32 sheet, while the fuselage is mostly of 1/16 sheet. Needless to say, care should be used picking your balsa to keep weight down, yet assure sufficient strength where needed.

The finished mode has an empty weight (no R/C equipment, engine) of 11 oz and scales 23 oz ready to fly. Wing area is 220 sq in. The entire radio installation weighs just 8% oz - and this gives 8 channel operation!

One of the really unique features of Mini-Hog, as Bill calls it, is its special twin cylinder engine. This was made by the Roto-Valve people and is equipped with their exhaust throttles. These do not show in the pix, but are linked together, to work from a single pushrod. The power plant, based upon standard .049 Cox piston-cylinder assemblies, appears to use Cox intake parts and reed valve assemblies as well. The entire crankcase and crankshaft were produced by Roto-Valve.

What started Bill off on this project? That beautiful little glow engine might have been the trigger. But it is likely he was strongly influenced by the tiny geared German motors, sold in this country under the name of TOS Micro- Mo. These motors weigh about 1/2 oz apiece, can be used as servos almost as they come from the supplier. They have 42 to 1 gearing built in, and all you have to add is an arm on the output shaft, and a hook for centering rubber. No stops should be used anywhere in the control system, otherwise the gears might be damaged; control surface movement can be limited by the size and length of rubber centering band fitted. Only tricky job is to attach a small music wire hook to the motor armature shaft, which can be reached through a small hole in the center of the case end. Bill tinned this shaft end with a pencil soldering iron, tinned the hook, then holding the hook in pliers the tinned ends were brought together and the iron applied to the hook to melt the solder and make the joint. This was done on rudder, elevator and aileron servos; the motor control unit has no centering arrangement, and is thus of the 'full trim' type.

As noted, the radio equipment is based upon what you can buy in the hobby shops. The receiver is a standard single-channel tone-operated Min-X, as is the 8-reed bank, but the latter must be slightly modified as shown. This change is needed so that simultaneous operation of two channels may be had. Note which reeds are used for which controls.

The main work in making the equipment is production of the PC board for the transistors that control the servo motors directly (without need for relays). Full details of this unit are given. All transistors are 2N229 and all condensors are 50-mf, 6-volt electrolytic; the latter should be the printed circuit type, with both leads coming out one end, for most compact installation. To save weight, no cases are used on the receiver or transistor units, but they should be mounted on and protected by sponge rubber. In the Mini-Hog they are mounted component-side downward, and reached through the opening left when the wing is removed. The three servos in the fuselage are attached to a light aluminum bracket; 'Goo' adhesive being used to hold them. The aileron servo is also Gooed in place, in the center of the wing. The Gem relay resting on the wing gives an idea of servo size.

Batteries and fuel tank are fitted in under the hatch on the nose of the fuselage. Bill used a nose spray bottle for the tank with a capacity of 1-1/2 to 2 oz; this is plenty for a 15 minute engine run. Incidentally, this twin-cylinder engine will turn a 9x6 at 8600 rpm, but a 7x6 prop is used for flying. Bill tells us the plane is a nice flier, and oddly enough, will maneuver on rudder (not using ailerons) almost as well as most high-wingers. The plane glides about the same as a LW Kitten.

The servos draw about 80-ma stalled (as they are when you hold them in hard-over control position); with no load they run on about 7 ma! These currents are on nickel-cads, there being four of the 225 maH size button cells in the plane to run the servos. Two pencells are carried for the receiver. Bill reports that the split-type 8 channel reed banks may be available from Min-X on special order.

For larger planes the 60 to 1 ratio TO3 Micro-Mo motor might be used to get more power - but be sure you use transistors that will carry the current.

At press time we are advised that in the near future, we may expect to see three engines marketed by Roto-Valve Mfg Co - a .60 opposed 4-cylinder, a .30 twin opposed, and an .09 inline twin - all using Thimble-Drome pistons and cylinders." 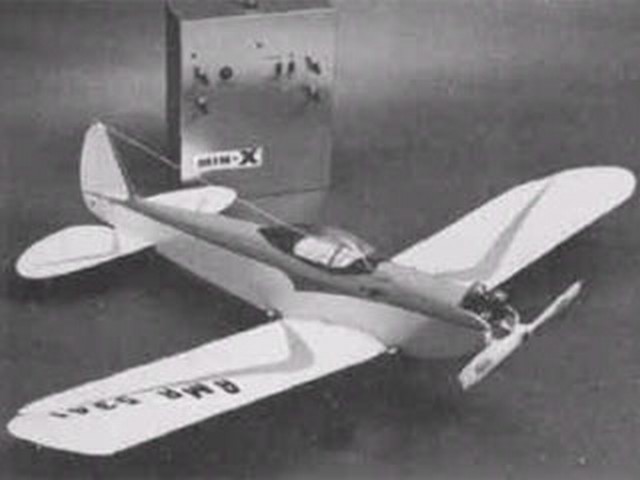