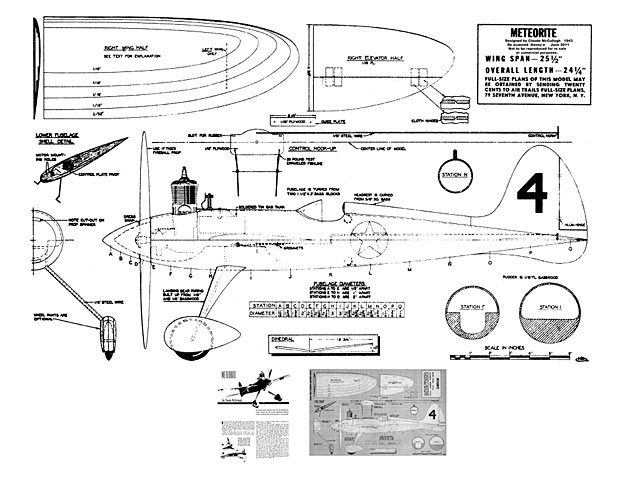 Quote: "ONCE you've given this little number a twirl you'll understand exactly how a whirling dervish feels after a hard day's work, for when opened full blast, the Meteorite will twist out of all but the stoutest grip and do a ballet pirouette as it races around its orbit. The original basswood Meteorite, without a scrap of balsa, weighed two and a half pounds (quite a contrast to the Cleveland 4-1/2 pound, 24in jobs) which isn't much more than the usual balsa controliner weighs.

When the teardrop outlines first took a design form. I wasn't intending to use hardwood. but with the "no more balsa" order I found myself up against the decision that every modeler must face sooner or later (perhaps the Balsa Butchers will change their name to Hardwood Hagglers).

I approached the task with little enthusiasm. but soon found myself actually enjoying the problems engendered by hardwood. Working with hardwood certainly isn't child's play, nevertheless you'll be surprised at the ease with which you can adapt yourself to it. Basswood is four times heavier than balsa, but in many ways easier to work with - though requiring a greater variety of sharp tools. You will appreciate basswood's enduring qualities when you see it weather crack-ups successfully. One of the members of our club built a U-control of similar design, using balsa; it is already near the junk heap, while the Meteorite, veteran of dozens of flights, has hardly had the paint nicked.

Now for the construction of a hardwood model. Basswood is best, but white pine will suffice. The fuselage should be turned on a lathe. If you don't have a lathe, try to borrow one, for its use will save you a lot of bother... "