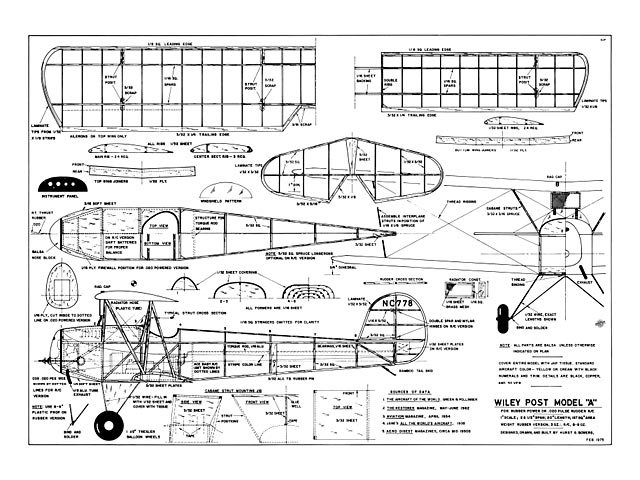 Quote: "The 1930s Great Depression dried up disposable income and sounded the death knell for many aircraft endeavors, but encouraged others to explore possibilities for much cheaper aircraft. One such was the trim little Wiley Post Model A, designed by a Ford automobile mechanic and supported by his dealership boss. Using a Ford Model A engine, the two-place biplane was intended to sell for less than $1,000, though that had to be raised to $1,438 for most of the production of 12 or 13.

Hurst Bowers' 28.5 inch span model was intended for rubber-powered free-flight or single-channel RC with .020 engine. It follows his usual schoolyard-scale design methods of stick construction with sheeted nose and laminated tips. This plan was published in July 1975 Model Aviation magazine."

Quote: "Wiley Post Biplane, by Hurst G Bowers. Build it two ways - rubber or tail-wagger RC. The original did well on both systems of power.

THE COLLAPSE of the stock market in 1929, followed by the great depression of the 1930s, came at a time when all Americans were filled with unprecedented enthusiasm for aviation. To a large extent this mania for flying was brought about by Lindbergh's successful Atlantic crossing, which was followed by other-daring and history-making flights. With the economy as it was at that time, however, most of the enthusiasm manifested itself in the form of reading aviation publications and day dreaming of the time when one could afford to buy an airplane and become a pilot.

Then, as at other times in our history, there were those determined and resourceful individuals who were not content to merely daydream. They had to put their dreams and ideas into action; into the development of actual hardware. Many barns, shops and basements became small aircraft factories, just as is the case with homebuilders today, utilizing such tools, materials and engines as could readily be obtained. Of course many of these efforts were futile, but many also were quite successful. For example. the Pietenpol Air Camper, powered by the cheap and plentiful Model A Ford engine of the period, began under such circumstances and is still a homebuilders favorite even now, some 45 years later. Another example is the subject of this article.

The Wiley Post Model "A" began as the project of an enthusiastic Ford garage mechanic in Enid, Okla. Unfortunately, the name of this gifted individual has slipped into oblivion, but the owner of the garage, a Mr Straughn, was sufficiently interested in his employee's creation to establish the Straughn Airplane Co in 1934 at Wichita, Kan. The small Model A Ford engine powered, two-place biplane with side by side seating, was placed into production. Only three airplanes were built when the company was beset with financial problems. The machine, which was intended to sell for under $1,000 was costing more than that to build.

In 1935 a corporation in Oklahoma City bought manufacturing rights to the airplane and named it after Oklahoma's most famous flier. In so far as is known, the use of his name is the only connection that Wiley Post ever had with the venture. More than a dozen airplanes were produced, reportedly selling for $1,438 each when the company succumbed: another tragedy of the era. Those who flew the little ship indicated that it was very well liked, being docile and easy to fly.

Why does one select a given aircraft to model? I suppose there are as many answers to that question as there are modelers. It is not a matter of aesthetics, for who could find beauty in the Storch or Stuka? Yet these are favorites of many - just as others are turned on by the ungainly Jenny or Cub. Wasn't it said that beauty is in the eyes of the beholder? In so far as modeling is concerned that should be expanded to say: Beauty is in the eyes of the beholder, at a given time, and for a given purpose. For that reason I selected the Wiley Post for an indoor rubber-powered project. It turned out to be a beautiful model, but our indoor flying site simply didn't do it justice. In spite of all my adjusting, this seemed to be a 'right hand turn' model that liked big circles.

I resigned myself to the fact that it was best suited for outdoors. However, during a careful check of alignment I discovered the problem - a slight amount more wash-in on of the top wing panels than the other. With this corrected the model flies nicely but I still feel that it is better suited for outdoor flying on those lazy, calm summer evenings. Since the weight of the Cox .020 Pee Wee engine very nearly equals the weight of the propeller and rubber why not make this a power job? Better yet, the little ACE Baby pulse R/C unit which weighs only slightly over three ounces will save lots of long chases to retrieve the model.

Look at the figures; the wing area is 187 sq in, or 1.3 sq ft, while the model weight, complete with engine and radio, can be easily held to 10 oz or under. This gives a wing loading of 8 oz, or 1/2 lb per sq ft. In our experience with the small 'schoolyard scale' R/C models which are becoming so popular, we have found this wing loading to be perfect. Needless to say, this little model has unlimited possibilities and, in keeping with the original concept of the prototype, 42 years ago, it is cheap to build and fly in either mode. Best of all, you don't have to burn 10 gal of gasoline in your car going out to a suitable flying field - just walk over to the local school yard and 'let her rip.'

Construction: Construction is simple and fast. Start by building the two fuselage sides of 3/32 sq medium balsa directly on the plan. If you select the R/C version you may use 3/32 sq spruce for the longerons, but stick to balsa for the uprights, diagonals, and cross members. Join the sides and cut formers from 1/16 sheet stock, glueing them in place after sanding. I use Titebond glue almost entirely in model building primarily because it can be thinned with water and easily applied with a brush; however, there are applications where I prefer the old standby, Ambroid. Such a place is in covering the forward decking with 1/32 sheet. This is easily done by using four pieces cut to shape and held in place with masking tape until the glue is dry. Never use pins as this will split the wood at bends. Add the soft balsa blocks to the cowl checks and chin, and sand to shape. These, along with the 1/16 plywood nose plate, help to add the nose weight needed for the rubber version and provide a solid support for the 1/16 plywood firewall if the .020 engine is used..." 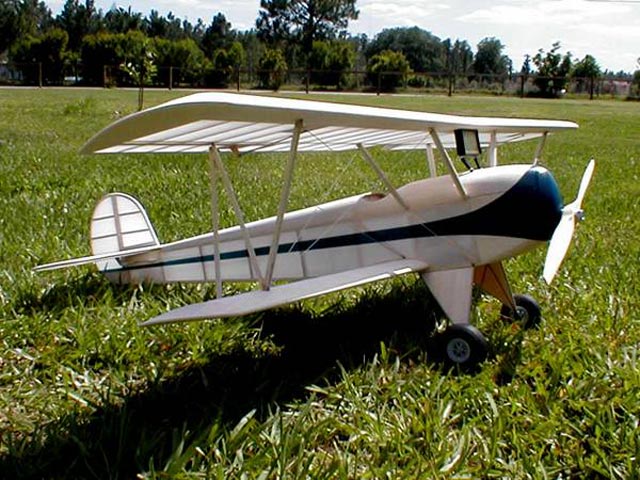