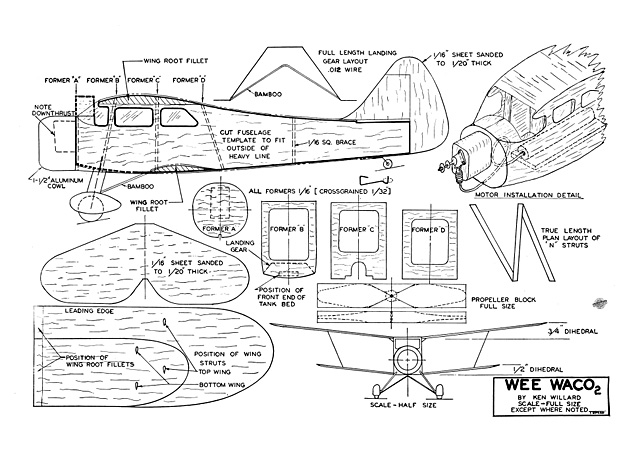 Quote: "An accurate replica of a famous biplane, this model is a fine flier with its CO2 power. Wee Waco, by Ken Willard.

DO YOU like flying scale models? Do you like biplanes because of their realistic appearance in flight? Have you hesitated to build a free flight, flying scale, gas-powered biplane because you feared the results of a crash during adjustment, or couldn't find a suitable large open area for flying the model?

Well, here's the answer to all your problems - Wee Waco. If carefully constructed and properly adjusted, Wee Waco is one of the best scale models you will ever fly. It is ideal for those quiet summer days, and it will handle a light wind too. Best of all, you can make it in a couple of evenings.

The appearance of the CO2 engine has been accompanied by a marked increase in free flight activity because it eliminates the necessity for a large open field. As an oldtime enthusiast for free flight, I was intrigued by the possibilities of CO2, and when the Campus A-100 was introduced any open lot became a flying field. Also, the local park board, dead set against the noisy power models, hasn't said a word against these tiny replicas of the bigger gas jobs. You will find that the only problems associated with flying the small CO2 free flight models are those connected with the adjustment - and if you've been a controliner all this time you've got some mighty interesting days ahead when you start learning the secrets of free flight adjustment. But these little CO2 jobs will take a terrific beating because they are so light, and repair is a simple job even after a power dive crackup, since the sheet balsa construction allows it to be glued back together right at the break.

Let's get on with the construction of Wee Waco so we can take it over to the corner lot and do a little flying - or take it over to the controline circle and watch the boys stare in amazement as this little job flies in left hand circles, righting itself automatically when disturbed by the breeze. Be sure you have it adjusted, though, to avoid the horse-laugh. We'll talk about adjustment later.

First, go to your hobby shop and select your wood. You won't need much, but it will have to be of the very light-weight variety. As you know, some balsa is three or four times heavier than other stock. Avoid such a grade. Get the very lightest grade except for two pieces - the engine mount and the tank bed which should be of medium grade (not heavy!) balsa. Study the plans for a few minutes and look at the photos. After you have the general idea pretty well in mind, make templates for the fuselage sides, formers, wings and tail surfaces out of stiff paper by tracing directly from the full size plans. Be sure to cut the fuselage side template to fit the outside edge of the heavy outline. Now you are ready to make the fuselage. 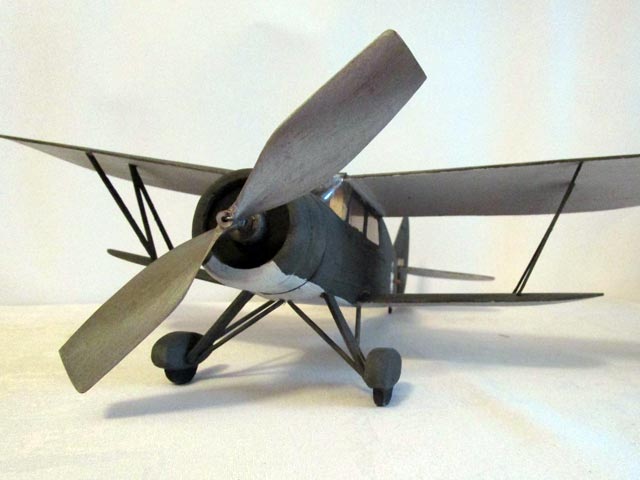