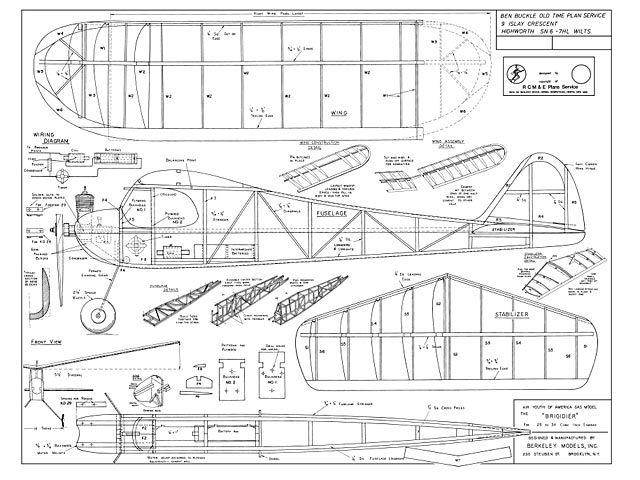 This here is a later reprint from RCME. Also then later again imprinted as from Ben Buckle Old Time Plan Service.

Note the spelling of 'Brigadier' varies, depending on the source. See morepics 004 for an example of Berkeley using the spelling: "Brigadier" in ad from Man, Sept 1946.

Many Old-Timers are not available in kit form but John Pond has everything you could want in the way of plans. If you're new to plans, this one is a good starting place/Fred Koval and Dawn DenBleyker.

This FM Product Review is somewhat out of the ordinary in that it is of plans rather than a kit. While there are several old-timer kits presently on the market, such as the Tyro Playboy Sr reviewed in the April 1977 issue of FLYING MODELS, the available kits represent but a small percentage of old-timer designs.

For those modelers who want the challenge of designs not found in kit form, chances are full size plans may be obtained at a reasonable price from John Pond Old Time Plan Service, P. 0. Box 3215, San Jose, California 95156. The Number 8 Old-Timer Free Flight Gas plans list, a virtual catalog of old-timer designs. including such classics as the Kovel-Grant KG-1, Scientific Miss America and Comet Clipper, is available for 75Q. Also available from Pond Plan Service are lists of old-timer flying scale and rubber designs.

The subject of this review is the Berkeley Brigidier, plan Number 1C7, priced at $1.75 plus 15% for postage and handling. This plan set is worth the money even if the purchaser doesn't choose to build the Brigidier. It is, without exaggeration, a course in old-timer construction. The majority of techniques employed in building the Brigidier are common to almost all old-timer designs. Besides detailed building instructions. the plans contain isometric construction drawings for the fuselage. wing, and horizontal stabilizer. I would like to see this aircraft become available as a kit using these same fine plans.

I should point out that not all the plans contain such detailed instructions. In fact, many are construction plans only, I would like to see John Pond make copies of the original construction articles available with all plans.

I chose this particular design because I needed a Class A cabin airplane for competition. This plane features simple yet robust construction, which requires very little modification for conver-sion to radio control operation. It is reasonably large. having a 58-inch wing span and wing area of roughly 446 square inches. This allows the use of a .19 glow engine according to SAM Rules (446 in sq + 225 in sq / .10 engine displacement = 1.982).

Building the Brigidier should present no problem to anyone except the rankest beginner. The fuselage is built of 4-inch square balsa with 1/8 x 1/4 in diagonal braces. Both sides are built at the same time, one atop the other to ensure they are alike.

Once the sides have dried overnight. they are removed from the building board, and as shown on the plan, wing mount formers F-1 and cross pieces are installed over the top view. Care should be taken at this point to make sure every-thing is square. Bulkheads 1 and 2. F-2. F-4 and the remaining cross pieces are installed next, as well as the 3/16 x 4 in side stringers and formers F-7. The only deviation from the plans was to eliminate the hardwood motor mounts and cut-outs since I chose to use a Tatone tank mount. The landing gear should be formed and fitted to bulkhead number 2. The nose blocks can be cut and sanded to shape but should not be epoxied in place until the engine and tank mount are installed. In fact, if a pressure system is used on the engine, I would suggest making the cowl removable to allow maximum accessibility.

I used Titebond glue for most major construc-tion and Devcon "Slow Cure" epoxy in the firewall area and wing center section joints. Both the "Slow Cure" and five minute Devcon epoxy are available in 4'/2 oz. plastic dispenser bottles. which I find to be more convenient to use around the workshop than tubes. I found the instant adhesives, such as Pacer Industries Zap, to be quite useful when forming items such as the cowl blocks since they allow the builder to tack the blocks in place for shaping and permit them to be removed easily.

The first step in constructing the wing is to cut templates for the wing ribs out of 1/32 or 1/16 plywood. The ribs, cut from 3/32 balsa, are stacked together and sanded to shape. The wing tip components W-4, W-5 and W-6 are cut from 1/4 in sheet balsa. The wing is built one half at a time, flat on the board as shown in the wing construction detail. When both wing halves are completed, join them using joiner W-7. The only modification I would suggest would be the instal-lation of vertical grain 1/16 plywood doublers on both sides of W-7 to strengthen the wing for radio control operation.

The horizontal stabilizer is constructed ac-cording to the plans with the exception of sub-stituting a 3/16" x '/4" strip for the 3/16" X 3/4" trailing edge. The elevator is fabricated from soft, light 3/16 x 1" balsa, as shown in the photos.

The vertical stabilizer is built of 1/4 in square and soft 1/4 in sheet balsa. R-5 is made about twice the size indicated by reducing the length of R-2 and R-4 and moving the vertical spar forward about 1-1/4 in.

The engine used is a Veco 19. A Tatone No.36 tank mount is used to mount the engine. I feel the Tatone tank mount is about the easiest and most trouble free way to install an engine in an old-timer. It eliminates burying the fuel tank inside the fuselage and keeps all the fuel plumbing outside where it is easy to troubleshoot.

To cover the Brigidier, I chose Silk Spun Coverite in dark blue. This material is quite easy to work with. Unlike the plastic heat shrink materi-als, it is almost completely resistant to punctures and tears. The durability of Silk Spun Coverite was demonstrated when I flew the Brigidier into a tree and a chain link fence without a single puncture during my shakedown flights. As with any iron-on covering material, read and follow the instructions. It's a lot easier to take a little more time to do it right the first time than to do it over. Once covered, one coat of clear dope is applied over the entire airplane. Take care to use only the specific brands of dope recommended in the instructions accompanying theCoverite.

In an effort to keep the total weight of the plane as low as possible, I used a Cannon two channel Tini-Twin brick, which I recently had factory converted from 27 MHz to 72 MHz and tuned to operate with my World Engines Expert Series transmitter. I used the 500 mah battery pack since I needed the additional weight up front to make the plane balance properly. The two chan-nel Cannon brick is ideal for the smaller Class A old-timers due to its compact size, 1-1/2 x 1-1/2 x 2 in, and its light weight. The system weight is 5.6 oz with 500 mah pack or 4.6 oz with the 225 mah pack. I encountered considerable difficulty with glitches, possibly caused by CB interference. on the original 27 MHz frequency, which was corrected by converting to 72 Mhz.

Ready to fly, the Brigidier weighed in at 2.25 pounds, which results in a wing loading of 11.6 oz/sq ft, well over the 10 oz per square foot minimum allowed by SAM. Old-timer designs are almost in a wing loading class with sailplanes and many of them thermal as well as a competitive sailplane.

The plane balanced at the point indicated without the addition of any weights and several test glides indicated everything to be within flying trim. Several powered flights were then made with the engine set rich and no problems were encounted under power or in the glide. On the third attempt though, the plane broke hard to the right while still on the ground and went full bore into a chain link fence. The resulting damage (engine and firewall torn from the aircraft) was quickly field repaired with five minute epoxy, and several more flights were made with no problem (unless one considers having to climb a tree to retrieve the aircraft after allowing it to get too far down wind). The problem of breaking to the right was probably caused by either a bent gear leg or the right wheel hanging up. My little problems point out two important factors. First, when flying these relatively light weight, light wing loading old-timer aircraft, try to keep them upwind if possible since you have to feed in considerable down elevator to get them to penetrate, resulting in rapid loss of altitude. Second, when flying any aircraft, take the time to check it thoroughly prior to each flight. Had I done so, I would have dis-covered the problem with the gear.

In summary, I feel the Brigidier is an excellent Class A cabin aircraft. If a Veco .19 with the R/C throttle is installed using a third servo, it would make an outstanding trainer with which to break into old-timer competition. I suggest the throttle-equipped engine since it allows the pilot to adjust the power to suit his ability and reflexes during the launch. The use of a free-flight engine without throttle may prove to be too hot for the novice. Once the engine run was terminated, the Brigidier became quite docile. I was able to hand the transmitter to Vick Bock. the photographer. with limited R/C experience and to Dawn DenBleyker, my co-author, who has no RC experience. Both were able to fly it around with little more than simple voice commands. This confirms my belief that old-timers make excellent trainers." 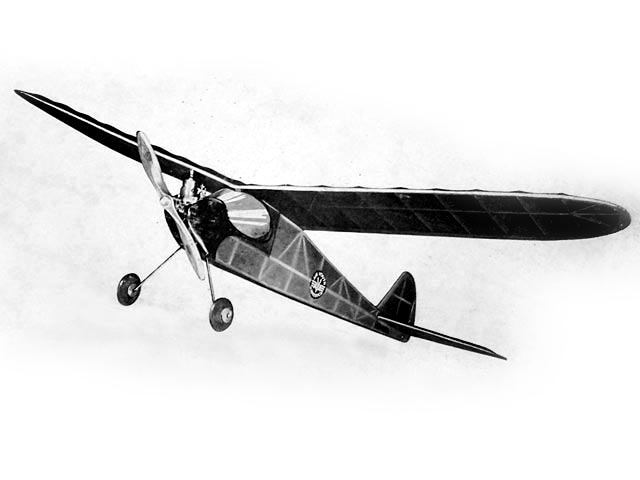 Hi Steve, Here's a photo of me and my Berkley Brigadier from plan 238 [more pics 003]. It is powered by a Forster .29 ignition engine and is surprisingly competitive in SAM competition. The photo was taken at the 2014 SAM Championships in Muncie, Indiana. I've also flown it in oldtimer competition at the U.S. Nationals and the Empire (NY) State Championships. It does tend to hang on the prop and needs about three degrees downthrust. SAM USA recently extended the Oldtimer cutoff date from 1942 to 1950, so I am looking at build a Super Brigadier which is basically the same model but with a polyhedral wing. It's easy to build and Hank Struck designed it, so you know it's going to be a good flier. Thanks for all the good work!
SimonBlake - 13/12/2016
Add a comment