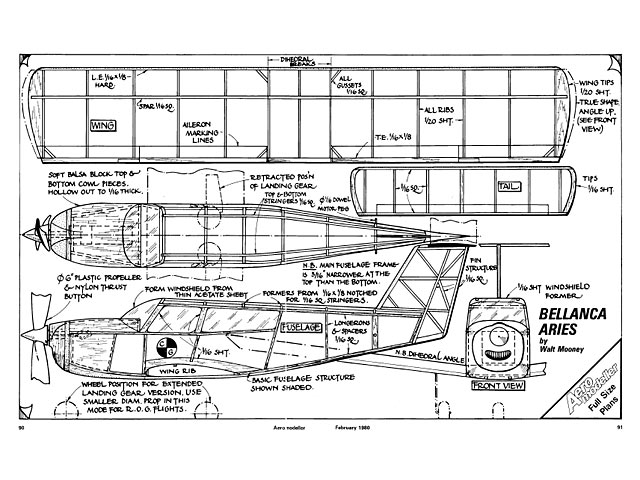 Quote: "EVERY YEAR since the late forties, Frederick Warne (Publishers) Ltd of Great Britain puts out an annual issue of The Observer's Book of Aircraft. Compiled by William Green, with three-view silhouettes by Dennis Punnett, these are a delightful source of information on the latest and most important aircraft in production. On page 27 of the 1978 issue is a three-view and data on the Bellanca Aries T-250. It is a high performance low-wing design with retractable tricycle landing gear, a T-tail, and has an almost slab-sided fuselage, which lends itself to simple lightweight Peanut construction.

The model is relatively simple to build, with no strange or exotic methods or techniques required in its construction.lf you have an indoor flying site continuously available, all the balsa sizes can be reduced slightly and all the nose-cowling blocks hollowed out and a balsa prop carved, which should result in a model that weighs around 9 or 10 grams ready to fly, capable of significantly better indoor duration.

The model was covered with Japanese tissue and finished with two thin coats of dope on the wings and tail and three coats on the fuselage. Side windows are simu-lated with black tissue. The passenger silhouettes were cut out of the window area prior to doping them in place on the lighter-coloured fuselage covering. The passengers' facial features were drawn in with coloured felt pen and the final coat of dope.

The windshield has some compound curvature. It has to be made by vacu-formi ng over a carved balsa mould if the proper shape is to be obtained. A simple wrap-around windshield can be used if a vacu-form is not available, with no detri-mental effects on the flying capability and only a slight penalty from a scale stand-point.

Colour trim was contrasting coloured Japanese tissue. Moveable surface out-lines, baggage door outlines, cabin door outlines, landing gear retracted outline, and engine cooling air inlet are depeicted with India ink. Wheel locations in the extended condition are shown so that a model can be built with the gear down, if desired. The added weight and drag coupled with the smaller propeller will result in shorter flights, but the unassisted take-off and landings that can then be made may increase your flying pleasure, so take your choice.

The model shown is adjusted for flight by the following adjustments. It flies in smooth, left-hand circles which tend to be tight in the beginning and wider as the motor runs down.

1. Both wings are washed out about 1/8in at the tips. That is, the trailing edge is higher at the tips than at the fuselage. This results in a smaller angle of attack at the tips,and eliminates tip stalling.

2. The propeller is adjusted to point slightly downward, called "down thrust" as drawn on the plan. It keeps the model from pitching up under high power settings. The stronger the rub-ber motor, the more down thrust is likely to be needed.

4. The rudder part of the vertical tail is warped to give a left turn. The trailing edge is about 1/16 in left of the top cen-treline of the fuselage.

5. The centre of gravity is as shown on the plan. Ballast the model as required with modelling clay to put its balance point at the CG shown.

If, when your model is completed, it does not have these surface adjustments automatically, which is unlikely, they should be put in by warping the wings and vertical tail. After the dope is thoroughly dry, hold over a steaming kettle to allow the dope to soften and allow the warps to be put in place. Simply hold the surface in the desired position for a short time and then, still holding it, remove it from the steam and allow it to cool. Check it after a few minutes and make another correction if required.

With the exception of the dihedral angle, which has been increased slightly, there are no intentional deviations from the scale configuration. The model shown in the photos weighs 15 grams complete with a 14 in loop of 3/32 flat brown Pirelli rubber, and has flown for 57 seconds under a 25 ft ceiling, most flights are of the order of 48 seconds.

Outdoors, flights of over a minute have been consistently flown, using a loop of 1/8 in flat rubber. Because the rear motor peg is relatively far back, the larger motor requires a little ballast in the nose to main-tain the CG shown. Have fun flying your modern Peanut." 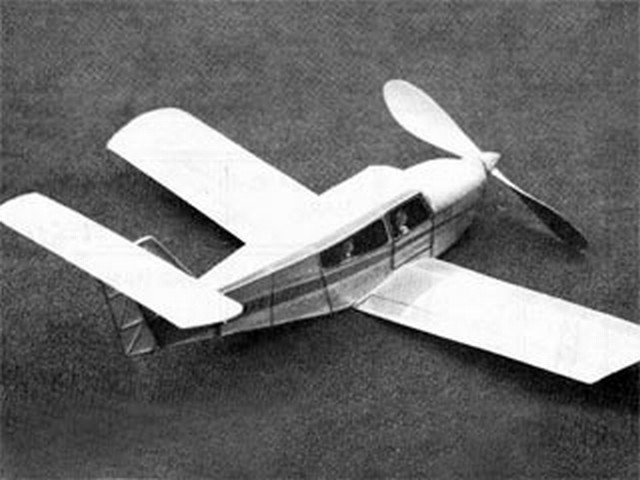