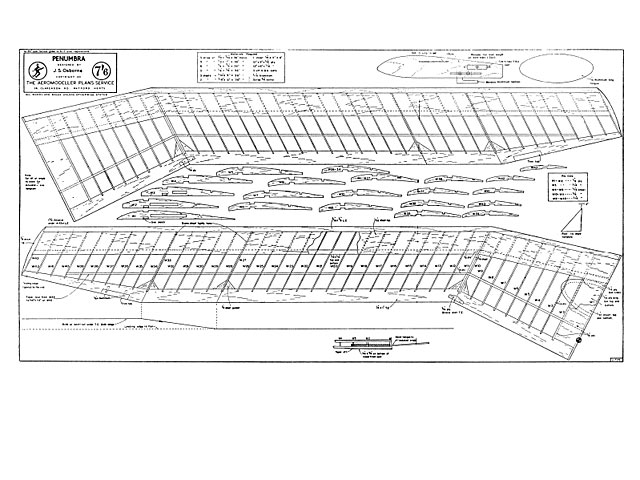 Penumbra. Tailless high performance glider from Holland by JS Osbourne. The fifth in a series of designs that featured an unusual 'cranked' trailing edge. From August 1959 Aeromodeller.

Penumbra. For those about to reach for their dictionaries, the name refers to the 'partially shaded region of light around the total shadow of the moon or the earth in an eclipse', and such a glowing title is particularly apt for this very successful tailless design to international specifications. When the decision was taken to make the international tailless class meet the same regulations as for A/2 gliders, tailless enthusiasts were set a rather hard task of absorbing the higher wing loading in a smaller than usual size model.

The Dutch have always been keen protagonists for the tailless type and JS Osborne has in recent years influenced the Netherland's designs to an extent that the models flown by his country's team for this year's international were all based on his conception, typified by Penumbra.

Penumbra is the fifth in this series of designs and was first made in 1956. From the start, the main object was to produce a fairly simple model with washout incorporated in varying stages of wing taper. This 'stepped' trailing edge method means that one can build in the washout comparatively easily by packing up the construction over the building board and with a straight line leading edge and sheet covered forward section of the airfoil, the wing is immensely strong (as seen in Germany this year, it takes a concrete block to put the model out of action!)

For experienced modellers, construction will be found very simple and the model is soon made. First flight tests should be made from hand launches with the trim tabs deflected to make Penumbra fly straight. It is then an omni-directional model, able to slip into lift on either side of the line of flight and this gives it considerable advantage in competitions. For final trim, a movable ballast weight is arranged in the 'fuselage' and this can be used to compensate for varying wing strength.

With such a high performance tailless model available now for everyone to build, maybe we shall see larger entries for events during next season. Certainly the flying wing is a fascinating subject and who could ask for anything more simple than a couple of wing halves to carry to the flying field for a day's enjoyment? 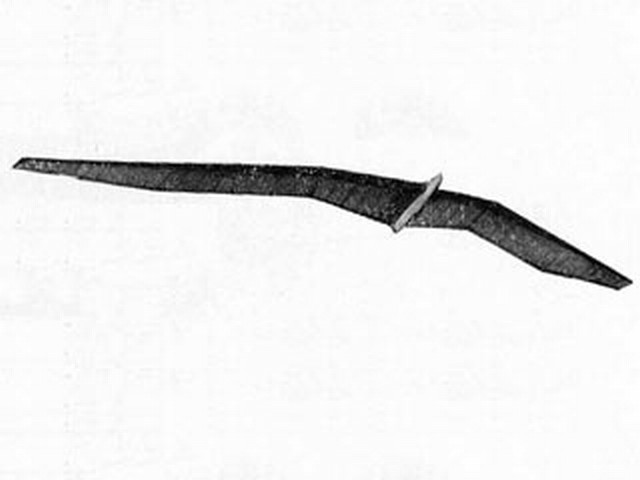