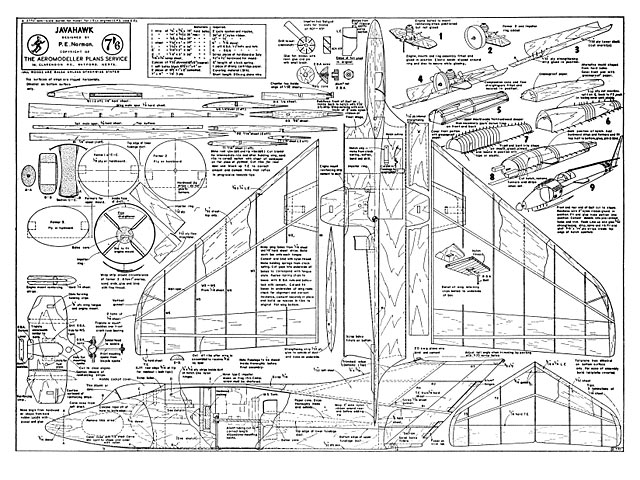 Quote: "This is 'it' for ducted fan enthusiasts. New construction methods and terrific performance.

UNDOUBTEDLY THE FINEST example of ducted fan propulsion yet produced by its talented designer, Javahawk enjoys the admirable reputation and great distinction of being the first ducted fan model to take off unassisted from the ground (using a dolly undercarriage) and established a world first by successfully flying under radio control. Photo above shows the 28-oz development which was demonstrated by PE Norman and his team of collaborators at Northern Heights Gala.

Ultra-lightweight 4.5V transistorised radio is carried in the nose, pen-cells occupy the fuselage spine and a Fred Rising actuator in the fin blister operates the rudder. Performance is outstanding. It will climb fast, spiral dive, recover immediately on correction and produced the finest spot landing of the day at Halton Meeting. All this with a standard Frog 150 diesel and fan as detailed on the drawing opposite, but with the airframe expertly modified to reduce weight and increase area.

The standard Javahawk is a diminutive 27-1/2 in span and weighs only 21-oz yet as all who have seen it know, it is extraordinarily robust, and the life of PE Norman's prototypes will probably exceed several thousand flights apiece. The only difficulty likely to arise in construction concerns the method of making a "moulded" plywood fuselage, so this side of building is detailed as follows.

Cut a piece of aircraft grade resin bonded 1/32 in 3-ply measuring 7 in by 17 in (this is oversize but allows for trimming at a later stage). Glue the belly strengthening piece A in place and mark a centre line accurately inside and outside. Measure the length of half the circumference of the already made fan ring carefully with a strip of paper, and mark half this length each side..." 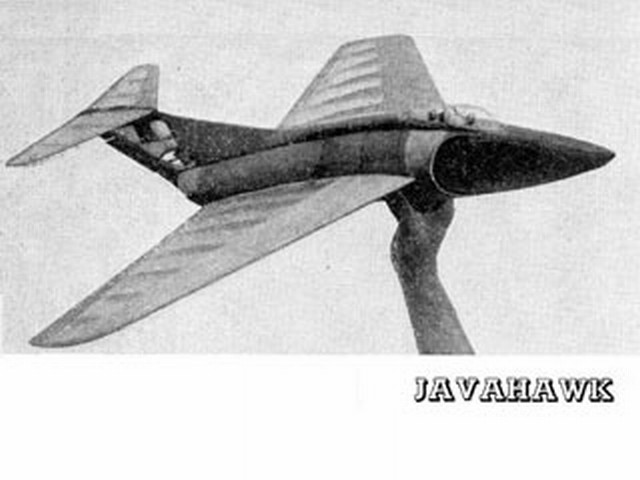 The build is a bit tricky getting the ply fuselage to the correct shape as described on the plans. PE Norman used to make violins so had the facilities to do some quite lovely moulded ply shells. With a bit of "Cut and shut" the fuselage can be made without too much difficulty. I made an inner duct and fan mount for a 55mm fan unit and controlled it with ailerons and an elevator. The aileron servos (9g) were fixed between the fan duct and fuselage shell, and elevator servo in the fin. I would recomment some wing fences at mid span to help reduce wing rocking at high angles of attack.
Adrian Hayward - 09/03/2021
Dear Sirs, I have just added a comment to the page for the Javahawk explaining a couple of points for builders. I built one some time ago and fly it at some shows and vintage model events. I have attached some pictures of my take on the airframe [004-007]. Best regards,
Adrian Hayward - 11/03/2021
Add a comment