Plan includes assembly photos along with instructions in both English and Japanese.

Update 25/08/2019: Added alternate version of instructions (sheet 2) showing the photo sequence and build notes. This is in greyscale and much easier to read.

The Cutlass 20 is a delta model manufactured by OK Model Co Ltd, and sold by Hobby Shack stores. Upon inspection of the kit, one is immediately impressed by the overall packaging. There are several separate bags containing pre-cut balsa parts and a bag of necessary hardware, including nuts, bolts, hinges, control horns, landing gear straps, and aileron bellcranks. You will need a 4 oz fuel tank, three 2 in diameter wheels and a 1-3/4 in diameter spinner to complete the kit.

The wood quality is excellent with the only exception being soft aileron and elevator stock in the kit that I received. These I chose to replace with harder material. Only the plywood parts in the kit are die-cut, all remaining parts are either pre-cut or pre-shaped. In reference to Pilot's die-cutting, anyone who has ever built one of their kits can attest to their quality. The plywood parts literally fall out of their respective sheets.

Two plan sheets are provided, a normal top view, side view with construction notes, and a separate sheet with construction photos and parts list. Being a delta wing, one would want to carefully study the plans before starting actual construction to familiarize oneself with the proper assembly techniques.

Actual building time is quite fast due, in part, to an excellent fit of the parts. The installation of the wing sheeting is the most time consuming. Here I used a combination of Hot Stuff and Titebond to speed things up.

Not shown on the plans, but what I feel is a worthwhile addition, is installing a steerable nose wheel assembly. By using the kit's nose wheel strut and adding a 1/8 in steerable nose wheel bracket and steering arm from Carl Goldberg this can be easily accomplished. This modification necessitated the construction of a new 1/4 in plywood firewall and use of a radial engine mount instead of the beam mounts provided in the kit.

The model was covered with Silkspun Coverite prior to installation of the engine pod and vertical fin. These parts were then installed and, along with the control surfaces, were given a coat of finishing resin. All excess resin was removed using paper towels before the resin hardened. After a light sanding, the model was sprayed with several coats of acrylic lacquer primer to fill the grain and again sanded. Final color was Ditzler's acrylic lacquer. This type of finish is fast, easy, and will withstand up to 25% nitro sport fuels.

Wanting to try a HB engine for some time now, I felt that this was the right opportunity. I used a HB .25 with stock muffler which proved to be a good choice. Four Kraft KPS 14 were installed utilizing the servo tray furnished in the kit but these must be mounted crosswise instead of the usual fore and aft configuration. There is ample room for the gear even though the radio compartment is narrow. Depending upon final balance, the battery may need to be placed to the rear of the servos. I mounted the switch and charging socket to the top sheeting via a hole in the radio compartment side wall.

Before going to the flying field, check balance and adjust surface throws to those shown on the plans. The latter step is essential, my Cutlass proved to be very maneuverable and had I not followed the manufacturer's recommendations I'm sure that the first flight would have been its last. To achieve balance as indicated on the plans, 3 oz. of nose weight was needed. On the maiden flight, maximum up trim was needed along with back pressure on the stick to maintain level flight. After removing the added nose weight this condition was corrected. This would indicate that the Center of Gravity should be farther rearward than shown on the plans and that this position should be used only as a guideline before arriving at the final balance.

Stalls are gentle with no apparent drop off to either side. Landings are a thing of beauty because of the safe, slow-speed approaches one can make. Overall flight performance is excellent with the Cutlass 20 being a very stable design.

At first glance, the price tag of $39.99 seems a little high for a .20 powered kit but after one considers the quality and flight capabilities of the Cutlass the price can easily be justified. For someone wanting to try a change of pace from the conventional styled airplanes, this Pilot kit Cutlass 20 will make the transition easy." 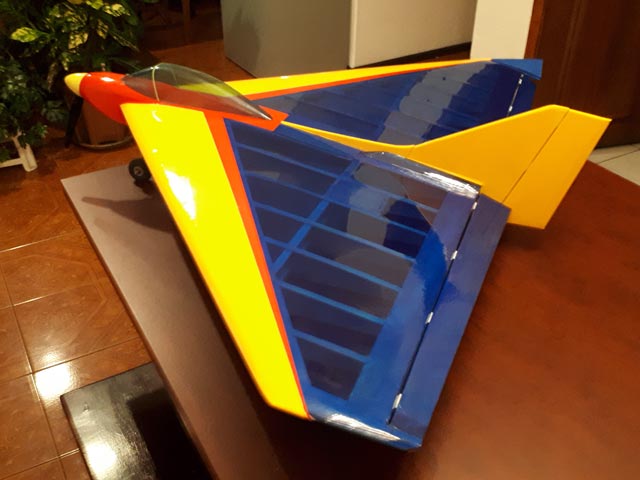 I built the Cutlass 20 when it first hit the hobby shops. It was an easy build and flew like a dream. I used an OS. 25 FSR for power, fueled with 10% nitro, which was more than adequate for full vertical and all aerobatics. I finished it in yellow and black monokote providing great visibility. Orientation was sometimes difficult to determine during flight. I have photos somewhere and when I locate them, I will forward them on to you.
ChuckJohnson - 05/10/2015
Some pics of my Cutlass 20 [main pic, 007, 008]. From Quito, Ecuador,
Eduardo Jarrin R - 31/03/2021
Add a comment