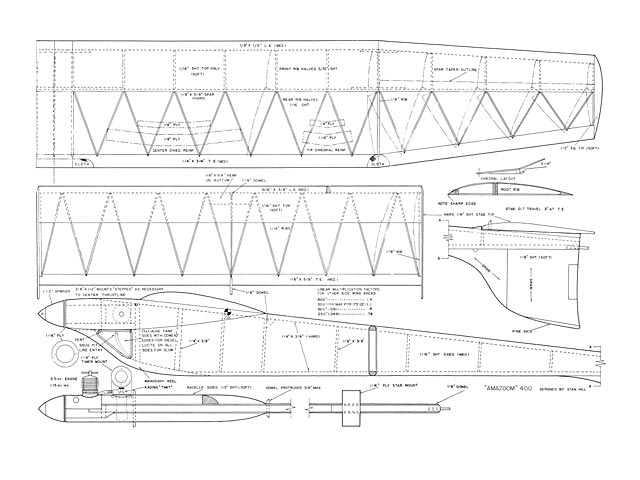 Quote: "The Amazoom, by Stan Hill. Fourteenth in a series, this surprising free Right goes on from where the designer's well known Amazon left off. It is tops for .15's!

The Amazoom is the fourteenth in a series of aerodynamically similar ships begun in 1942 out of a desire for more stability under power than models of the day could offer. The more significant developments are described as they affected the characterstics and performance of the basic design. It should be kept in mind that these data are presented as they affected one design and shouldn't be applied indiscriminately to all free flight types.

The first model was not unlike a thinner and longer. Powerhouse but, between a dirty engine on every landing and Charlie Grant's influence, the thrustline and CG were raised as much as possible. With center of thrust, CG and center of drag nearly on the same line, the previously tight (and, therefore, power-wasting) spiral climb opened up to a loose one-turn-per-five-seconds while the rate of climb almost doubled. Except for the inevitable effect of careless adjustment, which no ship can entirely overcome, spiral dives under power disappeared.

A tour of duty flying P-47's during the war interfered somewhat with my modeling activities but did not stop them, and five ships from '44 to '48 showed minor refinements, such as buried belly wheel, higher aspect ratio (8:1), a thinner, more penetrating airfoil and general clean-up resulting in further stability and about 15 percent increased performance. Playing around with stabilizer dihedral demonstrated clearly that stab dihedral increased spiral instability, while anhedral created resistance to spiral dives.

In 1948, my wife, basing her work on the latest developed model, designed the Amazon (oz2688) to take advantage of the then-new glow engines. Aspect ratio went to 9:1 (about the limit for a hot ship) and loading went down, giving a beautiful glide. Its construction was a little complex but was exceptionally rigid to stop in-flight flexing and warping in the sun between flights. The second version of the Amazon was modified in structure only and was flown to victory at the 1952 Nats.

While we were testing two new ships to use in England at the '53 FAI finals, it became evident that the balance of thrust offset against twin rudder offset was a balance at one speed only, with thrust being more effective at a low speed and rudder at high speeds. What was needed was a set-up permitting a good balance of forces at all speeds under power whik still maintaining a good glide turn without trick gadgets such as auto rudders or drag stabs..."

Article pages, text and pics, thanks to SimonBlake. 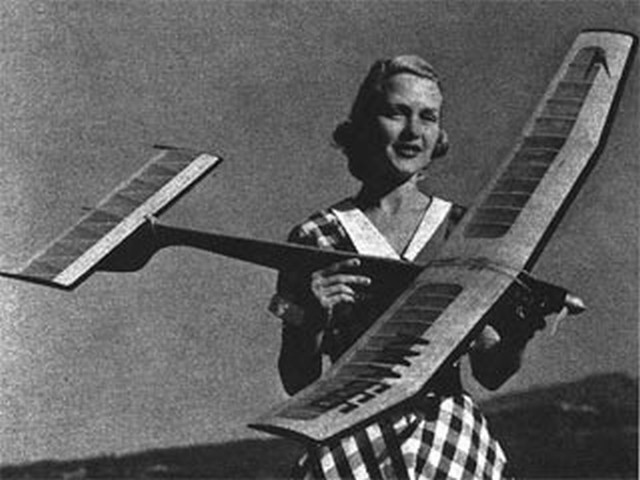