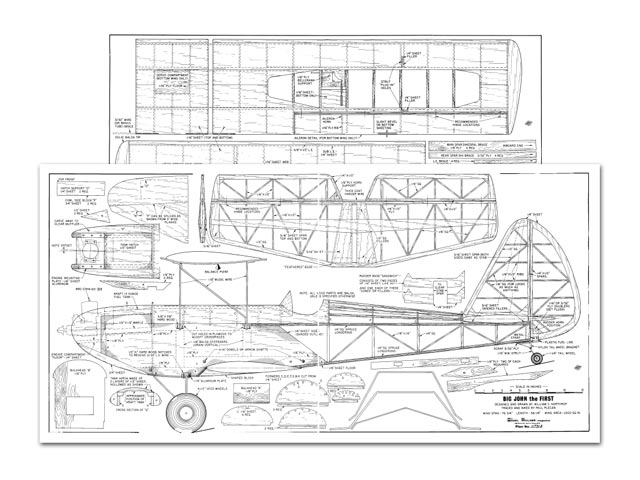 Note although Bill Northrop published this design in 1973, the model was designed and flown much earlier, circa 1958 (see article text).

Quote: "The prototype Big John is still this editor's all-time favorite of his own designs. Perhaps you'd like to share the pleasure of flying a big, lazy biplane that will do just about any maneuver - if you don't mind waiting a little while for them to get completed. A great exhibition airplane! By Bill Northrop.

The prototype Big John (BJ the First) came about, indirectly, as the result of our purchasing a set of English-made, 6 inch diameter, M & S Airwheels. This was in late 1957. Being a typical, balsa dust-in-the-hair modeler (the ones who stick pieces of wood together, cover them with something, and then somehow make the whole assemblage stay in the air without visible means of support), we built a model just to suit the wheels, a 3 inch scale Gipsy Moth. We purchased the last completely assembled Forster .99, two speed ignition engine for power (Forster Bros put it together for us from parts and said it would be the last one they'd sell complete). The finished plane weighed just a spec under 15 lb and had wing area that wouldn't quit! The combination turned out to be too much for the Forster, but by now, we were determined to get that engine airborne on something, so we drew up and built the prototype Big John.

Even though it was 6 pounds lighter and much smaller (only 1500 sq in!) the Forster still didn't seem to have the power, and so as with the Gipsy, we went to a Fox 59 in order to fly.

By the summer of 1963, we had acquired a Quadruplex proportional system, and had a real ball flying Big John at various R/C meetings, where it attracted lots of attention. The most often heard comment; sort of a back-handed compliment, was: Gee, that flies real great... for a biplane!

Tell ya what, it's the kindaplane that makes you want to shoot touch-and-go's, tankfull after tank full. It' ll do 3-point or wheel-only landings with equal agility. Aileron rolls are a little slow, but oh, so to majestic. Throw in a little rudder and they're a bit faster. Snaps and spins are easier with the enlarged rudder area, but still not quick and jumpy like a model just slow, realistic, and pretty - like a real airplane!

On Labor Day Weekend, 1963, we joined some pretty noteworthy company at Dahlgren Naval Weapons Lab, Dahlgren, Virginia - namely Maynard Hill, Walt Good, and Howard McEntee. The occasion was the first of many World R/C Record Trials sponsored by the DC R/C Club, and the primary objective that year was to capture the R/C Altitude record, then held by Russia. We brought Big John along for the fun flying between trials, but were convinced by others that we should also shoot at the record. And whaddya know? Big John flew to 7,470 feet; enough to beat the Russians, but not as
high as Maynard (13,320), Walt (10,080), or Howard (9,210). Hmmm. Maybe we should have tried to convince the FAI to establish a record category for R/C biplanes. Don't think it's been beaten yet!

A year later we developed Big John One More Time (oz6522) which had numerous modifications, including many added construction details such as fairings stringers, full symmetrical tail surfaces, thicker wing section, wheel brakes, nylon bolt assembly, etc. This was published in RCM in 1965.

In retrospect however, we still sorta favor the simpler construction in the prototype. In the November 1971 issue of MODEL BUILDER, we printed a picture of BJ the First and promised to publish a construction article on it, someday.

So, in spite of numerous requests, we bring it to you now, our own all-time favorite design. Certain new modifications have been added without losing the basic simplicity of the prototype. Rudder area is increased, ailerons have been widened and shortened, and the original top-opening hatch has been replaced by the bottom wing opening. For reasons discussed in the building instructions, we also made a change in the stab and fin construction. After reading that portion, you can decide for yourself whether to follow it... "

MEN's new kit, the Big John biplane, goes back a long way; it was designed by Bill Northrop in the early 1960's. The design was, and is, a good one, and MEN. has updated the construction techniques with some unique ideas. The design is not scale, but offers an appealing classic biplane appearance which can be enhanced with some additional work by the modeler. A radial cowl, dummy engine, extra cockpit, etc., could be added to suit the builder.

This is a big model; wingspan is 77 in (both wings are the same span), length is 56 in, and the wing area is 1500 square inches. The original model was flown with .60's, and MEN now recommends a .60 to .90. The manufacturer claims the plane can be completed at a weight of 8.5 to 9 pounds, and I'm sure that with a plastic film covering this weight is realistic. I'll get into the changes I made, using a larger engine and a painted finish, that resulted in a higher, but still very reasonable, weight. The design is not intended to be a hot aerobatic performer but an easy, lazy flier. Northrop's quote fits very well: This biplane will do just about any maneuver, if you don't mind waiting a little while for them to get completed.

MEN's kits are noted for their extensive use of die-cut light poplar plywood construction; they call it 'Tri-Square-Loc'. The kit is a faithful reproduction of Northrop's design, but the innovative construction is all MEN's. Using the light plywood as a construction material has some drawbacks; no matter what precautions are taken, this plywood may not remain completely flat - it will tend to curl and/or twist. The way the parts are assembled in this model gets around that problem; interlocking tabs and slots in the parts forces them into correct alignment. The way the parts are held in relation to one another results in a straight airframe, and a strong one.

I had seen the Big John fly back in the 1960's and had thought of building one. The availability of MEN's new kit, along with an engine that had been sitting in my workshop for several years, finally combined to put me to work. I had purchased one of Duke Fox's 1.2 twins when they first came out, thinking of an oversized pattern ship with a tuned pipe running down each side of the fuselage. I never got around to designing an aircraft for the Fox twin, so I built the Big John to put that engine to work. While I had the engine, Fox came out with new carburetors and several other improvements; so I returned mine to the factory and, for a nominal charge, had the new carbs and any other mods incorporated.

The engine, to me, is truly impressive in appearance. Husky castings, two carburetors, the included radial mount, matching mufflers, and a three horse power rating had me anxious to get it in the air. I knew the Big John would easily accommodate the 2-3/4 pound weight (less mufflers but including the mount) and felt that the size propellor the Fox would turn should be suited to this aircraft design. If the plane was a more bulky scale model, a lower rpm chain saw engine turning a larger prop would probably be a better choice. I planned a painted finish and estimated the total weight would be around 15 or 16 pounds, easy for 1500 square inches to carry. The actual weight turned out to be 14.5 pounds, for a very reasonable 23 ounces per square foot wing loading.

After the initial shock of seeing all the ply-wood parts, I looked the plans over to get a feel for the construction. Most of my models are scratch built from my own plans, so building from a kit was a pleasure. I recommend that MEN's step-by-step instructions be followed closely; they're carefully worked out to insure that everything goes together properly. The tail surfaces are mostly balsa, of typical built-up construction. The wings have two spars; these spars are built-up box type, made from 1/8 inch plywood with internal balsa spacers, and are easily assembled. Hardwood spacers are used in the spars where the wing mounting bolts will be; the hardwood is drilled through or drilled and tapped as called for.

Die-cut plywood ribs slide over the two box spars and are positioned over the full size plans. Wing jigs are furnished to hold the spars and leading edge as the ribs are glued in place. Leading edge and trailing edge planking is balsa. The ailerons on the lower wing are cut loose from the wing structure after it is assembled. Plywood dihedral joiners are used and the wing tips are plywood. Balsa center section planking finishes up the wings. I made a cutout in the upper wing, center section's trailing edge for a realistic touch.

The fuselage construction must be done following the sequence in the instructions so the parts will go together. The nose section sub-assembly was a bit like a jigsaw puzzle, with the die-cut plywood parts having tabs and slots to interlock in place. Between the plans and the instruction booklet, the parts are identified and they do fit together exactly as they are supposed to. Having had some experience working on aircraft kit design, I admire the effort which has gone into this kit - there are many, many die cut parts, all correctly engineered. My fuselage turned out straight and true; quite light with plenty of strength..." 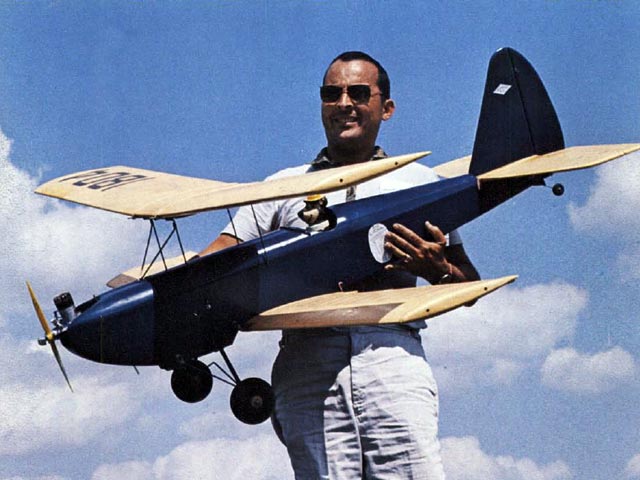 Thank you for all these plans. I made the the Big John from these. The Big John has been made smaller to 1,4m and is electrified. Great flyer. Here are some pictures [more pics 005, 006]. Thank you again for all your good work!
RalfMuskens_Netherlands - 29/03/2018
Add a comment