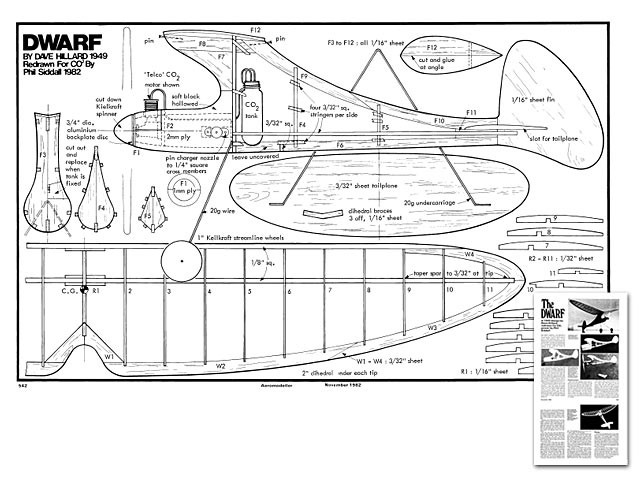 Originally designed by Dave Hillard in 1949 for Kalper .32 diesel, the Dwarf (oz5399) is here redrawn by Phil Siddall for CO2 power. A free pullout in the November 1982 Aeromodeller.

Quote: "A 1949 design by Dave Hillard, redrawn for CO2 power by Phil Siddall. The Dwarf.

Like many modellers, I am attracted to CO2 motors by their quiet running, and to vintage designs, many of which seem to have a little something extra in their appearance. Here for a change is a genuine vintage design that does not need scaling-down for CO2, is not only very good looking, but is also British! Cheap to build too, the contents of your scrap box should be sufficient for all parts.

The original Dwarf appeared in the 1949 Model Aviation Planbook. Designed by Dave Hillard, the first model used a KO .2cc diesel, later versions using the Kalper 0.32 diesel; my own versions have used the standard Telco motor. My first model was lost at the 1982 Free Flight Nationals. After a gas charge, the model ROG's into a strong lift, survived a mid-air collision with a glider on tow and disappeared upwards, the glider being hurriedly launched to join it.

When building the model be sure to use the lightest possible balsa for the fin and tailplane - your CO2 motor will weigh about a third of the original Kalper engine at t'other end. The original model balanced correctly without ballast, the only trim required being a touch of rudder. All other ballast can be medium grade but make sure the wing spars and leading edge are good strong stock to avoid elliptical dihedral appearing.

Construction. Start with the fuselage outline and fin which are built flat on the board. Fix half formers to one side only, then remove from the board and glue the other halves. The stringers will need the ends carefully tapering to fit closely at the tail, and should be fixed in matching pairs, starting with the two on the centreline. You may need to soak or steam the upper stringers to the correct curves. The stringers just above the centreline should be left until the CO2 tank is installed.

The nose section is formed out of very light block or laminations of soft 1/4 or 1/2 in sheet. Glue very lightly to F3 and lightly glue the ply nose former F1 in position. After carving to shape, carefully separate from F3, cut into two vertically, and hollow out as shown. Make the engine bulkhead from 2mm ply to suit the fuselage interior..." 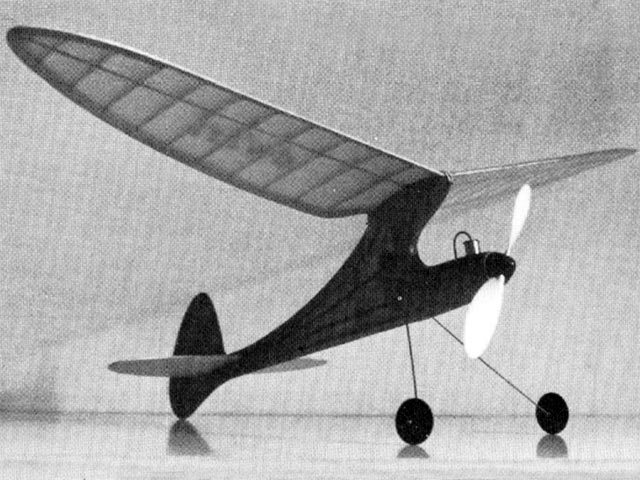 I have now completed my version of this model [more pics 003, 004]. It's 1.5X scale with running as small electric and 2 channel RC.
AnthonyRoberts - 08/09/2017
Hi, I'd like to ask a question or 2 about electric free-flight motor sizes, and if someone could post general info on motor sizes as these may take CO2 or gas motors. The plan I'm looking at has the setup I want but no info on it.
Tod - 21/11/2017
This is the way I would approach it. The article mentions that the model also flew on a Kalper 0.32. If you check Sceptreflight.net, you'll see that the Kalper puts out ca 0.015 bhp @ 7000-8000 rpm. That converts to roughly 11 Watts (1 bhp = 745.7 Watts). I would add 20% for losses through the ESC etc and round it up to 15 Watts input power at the battery. So that's maybe a 1S motor running on let's say 4A, or a 2S motor running on 2A or so. Start looking for motors in that range and treat yourself to a Wattmeter! Here's a link to the small article I wrote for Viewpoint that will explain the process in more detail.
ChrisPinn - 21/11/2017
Here's my version of the Dwarf for CO2. I used a Modela 0.27 engine and mounted further forward than on the plan and it balanced perfectly with no added weight. It has a rocket climb. Great little plane [more pics 007].
Cheers,
Stephen Corfield - 14/01/2020
Add a comment