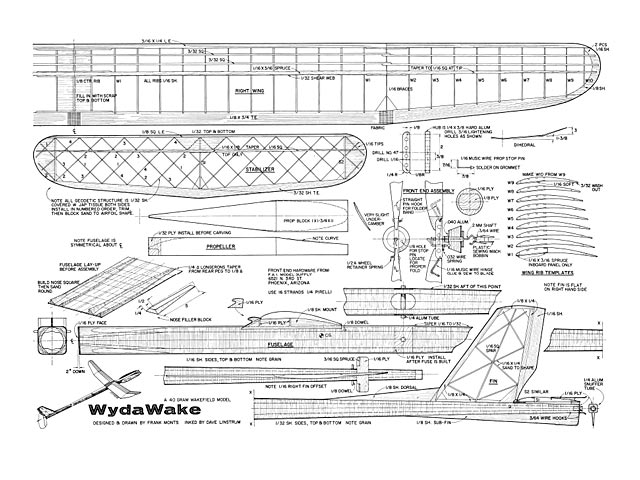 Quote: "Designed specifically to the new FAI ruling for Wakefield of 40 grams, our machine is not only functional but a performer of outstanding ability that can win local and national contests and perform on Sundays as well. Wydawake, by Frank Monts.

When the Federation Aeronautique Internationale Committee for International Aero Modeling exercised its collective wisdom to amend the Wakefield rules to allow 40 grams of lubricated motor to power a 230-gram aircraft, there seemed to be two choices as to what to do about it modelwise. We could keep on flying the same model with the rear peg moved 20 percent nearer the front hook or we could take steps to determine what might be the best way to get 180 seconds duration out of the energy available from the 40 grams of Pirelli allowed. Most Wakefielders first action was to move the rear peg. We did the same. Much to everyone's surprise the model still flew fairly well. However, when a stop watch judged the results, we found that about 20 percent of the old 50-gram duration was not there anymore. This lack of performance led us to the second but far more arduous choice.

The Wydawake is the result of this effort. The version presented here is the third refinement of a basic design which was first drawn in December, 1965. The goal was to design a Wakefield capable of high performance, high reliability, rugged enough to survive the Kansas prairie winds, 100 percent functional and at the same time have a oneness of line which would give a measure of esthetic satisfaction both in flight and when held in hand. It should also be simple and easily (but not necessarily quickly) built by the average modeler - specifically, in our own instance, by a couple of junior-senior modelers in the family, one of whom is a girl type!

The Wydawake configuration departs somewhat from the generally accepted Wakefield formula. The aspect ratio (about 14) is higher, the propeller pitch and diameter are larger, and the wing section, a slightly modified Benedek 7457-d-2, is more often used as a Nordic A/2 section, rather than for a Wakefield.

These departures came about, not as semi-intuitive whims, but through the application of some fairly fundamental principles. The propeller blade section came about through purely blind luck!

With only 40 grams of rubber energy available, it must be employed most efficiently to produce the maximum altitude in the climb without much concern about how long it takes to get there. We believe that maximum alti-tude is achieved by the maximum thrust that can be controlled in the power burst. For a given aircraft, a fixed thrust is required to maintain level flight. Thrust in excess of this increases climb in approximately direct proportion to the amount of excess thrust available. Therefore, to produce maximum climb altitude, we should try to arrange things so that the area under the excess thrust versus time curve is a maximum. This area is greatest when the torque is high and the time is short. Hence, 16 strands of 6 x 1 mm Pirelli, the thicker the better, is recommended.

When the propeller folds in less than 30 seconds, we must have the best glide (lowest sink rate) we can obtain to keep the craft airborne for another 150 seconds, and hopefully a few extra seconds for insurance. This is the reason for the 14:1 aspect ratio and the Benedek 7457-d-2 airfoil. The maximum lift/ drag ratio is increased with an increase in aspect ratio, thus resulting in an improved glide. Climb will also be improved since the thrust required will be less, due to the reduction in induced drag, becoming increasingly important as the lift coeficient increases toward the end of the climb.

The original prototype was completed in early Spring of 1966. The glide performance proved to be everything we had hoped for. The Nordic section and high aspect ratio did exactly what they were supposed to do. The climb appeared promising, but it could not be evaluated due to a poor propeller hinge stop design which permitted the propeller to flutter during the middle portion of the climb. Expedient type fixes, rather than redesign, eliminated the flutter and improved the climb somewhat.

Meanwhile, son Richard had completed his version of the Wydawake. His model had a markedly better climb, which combined with the very satisfactory glide to produce flight times consistently over 180 seconds in early morning non-thermal air. Examination of Dick's model revealed he had failed to sand in the propeller blade undercamber we had called for in the original drawings. We naturally incorporated this 'discrepancy' in our own model with equally happy results - about 50 feet more altitude! It was agreed that we would not chastise Dick for his poor craftsmanship provided he would not claim his erudite aerodynamic know-how led to the nearly flat back propeller.

Most modelers tend to view with horror the prospect of building a Wakefield front-end and most Wakefield articles we have read do little to change this view. They seem to imply that every modeler is a skilled machinist with a complete machine shop at his disposal..." 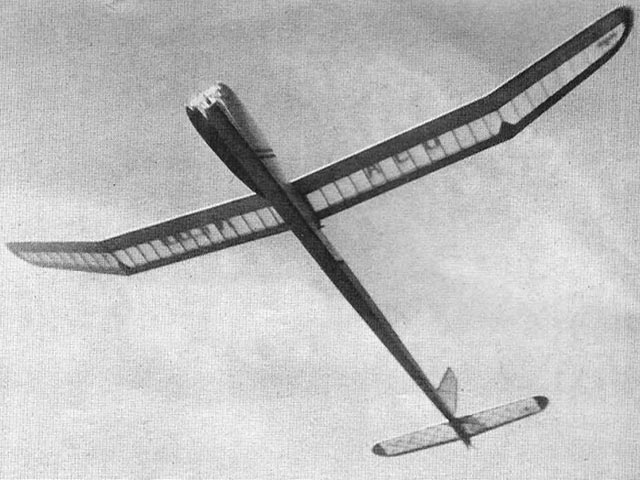