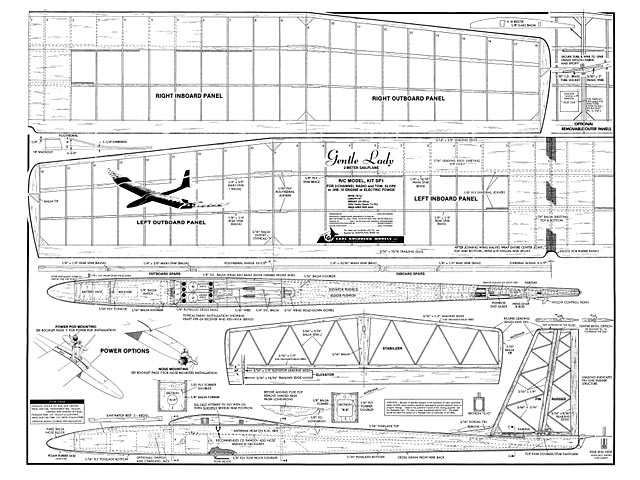 Quote: "Carl Goldberg's Gentle Lady, a 2 metre sailplane. Guide and mentor of so many thousands of modellers through his world famous free flight radio control and control ine designs, Carl emerges from Californian retirement with a glider that will surely become a standard recommendation for years to come.

How has it all worked out? A real pleasure. Gentle Lady is a sweetheart to fly. She really is gentle, and a lady. She reacts quickly to lift, can circle very tightly without falling off, trims out easily, can really go when necessary, is very respon-sive, and yet so stable I've been able to put the transmitter down right after release from the tow and she'd fly herself all the way down. What more could I ask?

I've been impressed, also, with the beauties of glider flying. It's great to be able to take just the model and a transmitter and go fly off a nearby slope! Guiding a trim-looking ship as she sails quietly and smoothly along, high in the blue, is a neat experience. Then when you get home, there's no worry about oil dripping on the carpet. Yet, glider flying is definitely a challenge - far more than I would have guessed before. Searching and finding lift, learning to be sensitive to it when it's very light, staying in the lift instead of flying out of it etc - it's all going to take a lot of flying to develop the skills.

Equipment we've used including Futaba FP3S with S20 servos, the EK brick, and the final model has the Kraft KP3AS with KPS 14 servos. All the equipment has worked without problems. Obviously some weight can be saved with small servos such as the 520's, or the Kraft KPS 18's. The battery we've used has been a 450 mAH, whereas a 225 would obviously save a little weight, too. However, since the battery is in the nose, it would be important, if using a small battery, to also keep the tail end light. Without any special effort to keep the tail end light, only 1/2 oz of additional nose weight was needed. If a heavier skid has been used, no additional nose weight would have been required.

The Sanwa or Acorns 2 channel radio would also work fine. If you want to use the tray for the servos, you will need to widen the fuselage in that area about 1/16 in.

Before we get into the actual construction, let me mention one additional thing. If you have a small car, you obviously will want detachable wing tip panels. This option is shown and although quite simple and light, it works very well. The final prototype has this feature..."

Update 21/04/2017: Doh. Have had a good look at this now thanks to Gene, and I think he's right, the previous plan was better. Switched them back again. The JJ plan is now available as a supplement alternate scan. It may be higher res, but it's not any clearer.

Update 15/03/2021: Added kit intructions, thanks to Pit. Note this includes parts ID sheet on page 4 which shows all printwood parts at small scale.

Note for a later, electrified version of this design, see Electra (oz6614) 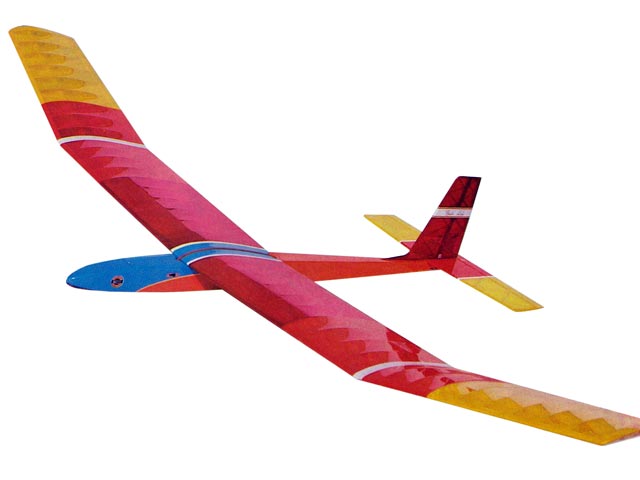 Steve, I am almost finished with a Gently Lady Glider built from your plan archive. Thanks for providing the plans. The plan did not include the wing rib templates. I found this was a common problem on the www. To finish the model I drew up a complete set of ribs in CAD and would like to make them available to everyone. I used the #9 wing rib shown on the drawing as the template for all the ribs. A PDF version is attached.
MarkPribak - 24/01/2013
My son is trying to print out the plans at work. He has a question about scaling and unsure of how to size the printout. Can you lend any assistance?
Thanks!
John - 11/01/2021
I'd say start with the FAQ page at https://outerzone.co.uk/faq.asp#printoutplan then try the knowledgebase pages on working with PDF files, like this 'Checking the page size' one: https://outerzone.co.uk/knowledgebase/entry.asp?ID=105
SteveWMD - 11/01/2021
Thanks for the reply. He printed it out and let the print size select automatically - got perfect size prints. Appreciate all the plans you have collected here. Wanted the GL Plans for 'in case' once I start flying my GL again. Have an Olympic II partially completed and new plans will be much easier to read.
John - 14/01/2021
Add a comment