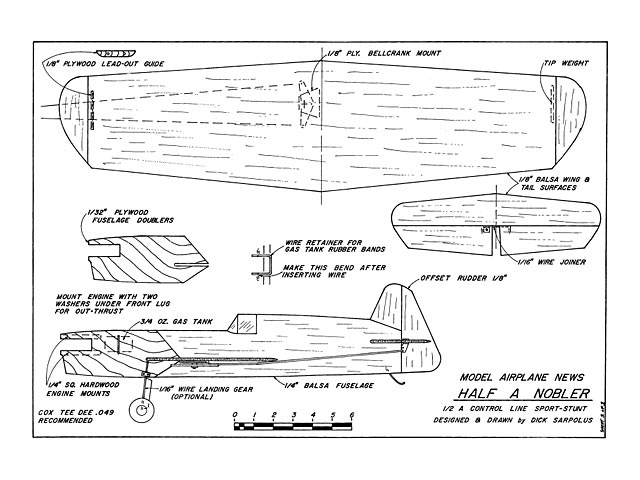 The Nobler (oz6212) is one of the best known model airplanes ever designed - I believe it is the only model, regardless of category, to remain fully competitive in the event for which it was designed for more than twenty-five years! Top Flite has produced the Nobler kit for twenty-five years now, and while other model kits may have been in production even longer, none can match the Nobler's competitive record. It is, of course, a control line precision acrobatic model and has been a standard for comparison ever since it was introduced. The designer, George Aldrich, also popularized a style of flying which had as much impact as his model design. Aldrich was not the first to use coupled flaps and elevators but he was one of the first to achieve consistent success with the system.

A little history here: don't be too critical if I miss some dates a little. Control line stunt flying developed from Jim Walker's introduction of the event in the late '30s; maneuvers were flown 'fast and furious' with planes such as deBolt's Stuntwagon (oz7345) and Yates' Madman (oz10708), in the late '40s. Coupled flaps were first used, I believe, by Bob Palmer on his Chief around 1949, and the planes began to slow down and perform the maneuvers at a more leisurely pace. Aldrich, with his Nobler, came up with a combination of good features; thick airfoil, large wing area, correct flap/elevator sizes, good fuselage side area distribution, long nose moment, etc. Also very important, his design was well-kitted by Top Flite - see Nobler (oz525) - the Noblers all flew well when constructed from the kit. I believe his first Nobler was built around 1950, and the final version so well known now came along in 1951 - it was published in Model Airplane News.

The Radio Control Nobler should also be mentioned - Ed Sweeney and Fred Marks' experiments with coupled flaps and elevators for R/C resulted in a Nobler (oz21) with tricycle landing gear and a widened fuselage for the radio equipment. Also kitted by Top Flite, it flies well, although the coupled flap/elevator idea did not catch on for competition use.

Enough historical notes - the model presented here is half size (actually 53%) of the original Nobler, and it is powered by an .049 Cox Tee Dee. The outlines were reduced photographically: the simplified construction utilizes a profile style fuselage and a flat sheet wing. Though not aerodynamically sophisticated, the large wing area permits a good flying model. It will do almost all of the pattern maneuvers - not as well as a more elaborate model, but its inherent strength permits many harmless crashes. It makes a good stunt trainer for this reason; larger models may be a little easier to fly but they also break up a lot easier... "

Update 27/08/2020: Replaced this plan with a clearer copy (original MAN drawing as published with English text), thanks to Valeria367.

Quote: "Hi, Steve and Mary. Good morning.
Today I want to send you my last CAD redraw: the '1/2A Nobler' by Dick Sarpolus (oz2354). As usual I send you the plan in PDF format, plus the CAD files in both formats DWG and DXF... And some more: years ago, I bought this plan from Model Airplane News, so I've scanned it, cleaned, and convert to PDF to send to you. It's the MAN's original: with dimensions in inches, and text in english. Greetings. Valeria367" 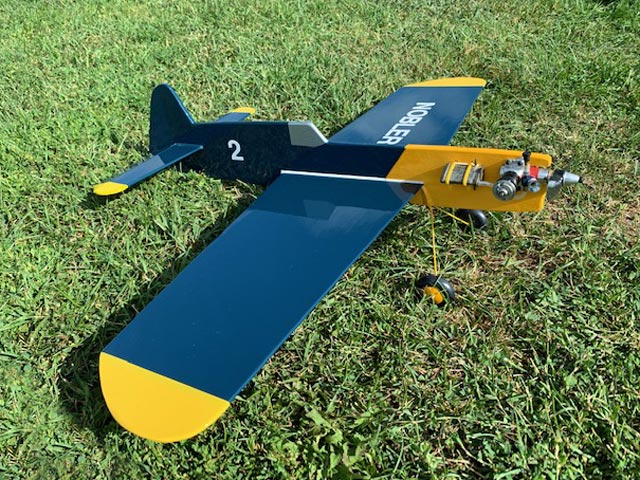 I just built one this week from your plans and we flew it this morning.
TD .051 and 5x3 prop it was very fast on 35’ Dacron lines. Switching to 42’ lines, low compression head and 6x3 prop should slow it down a bit or swap out the TD for a medallion. It makes a nice model. Thanks!
Steven Swinamer - 07/09/2020
Greetings from beautiful Nova Scotia, Canada. Here are a few pictures of the 1/2a Nobler I built last week [main pic, 007-009]. We test flew it this morning. It was fast! Next time we’ll use 42’ lines like Dick recommends in the article and de tune the Cox TD 051 engine a little. What great fun!
Steven Swinamer - 08/09/2020
Add a comment