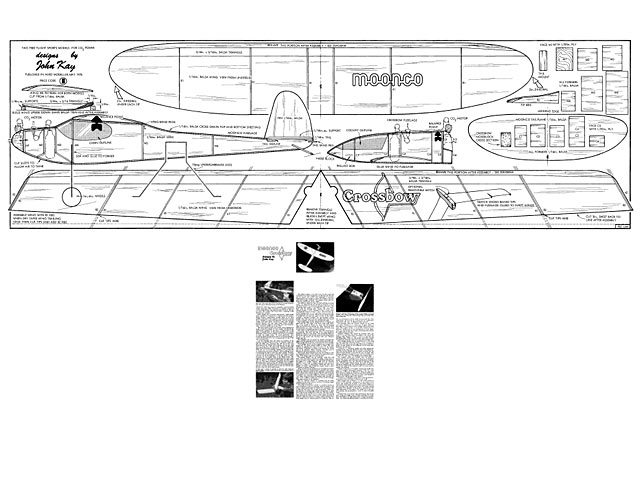 Moonco and Crossbow. One plan with 2 all-sheet CO2 model designs on the same sheet. A free pull-out from May 1978 Aeromodeller.

Moonco is a high wing cabin model, Crossbow is a flying wing pusher. Both models are all-sheet, and both use an interesting (Jedelsky?) wing construction, being built upside down and using a strip of TE-section balsa to form the LE of the finished wing. Article text is included here.

Quote: "Moonco has been made to resemble a powered cabin model of the late .1940s, Crossbow is a smaller version of a 0.5cc diesel flying wing that has been flown for the last six years. The original flew away from a meeting at Old Warden last summer.

Both models are of simple construction, which make them suitable for a beginner or a father-and-son project. Being all-sheet construction enables them to be built quickly, and each of the originals was ready to fly in seven hours. Weight is a major consideration with CO2 powered models and both planes should be made from straight grained medium soft sheet balsa. When complete Moonco should weigh no more than 3oz and Crossbow 2oz, otherwise performance can suffer.

The constructional notes are written with a beginner in mind, so that the builder of a few models will find all the information required on the plans. I suggest that all the balsa is sanded prior to the parts being cut out, as this eliminates much of the sanding work later on and helps to keep the weight down. To avoid distortion, non-shrinking adhesives should be used on all flying surfaces. I would recommend PVA, fast-drying epoxies or one of the new cyanoacrylates.

Cut out fuselage sides and mark the position of the formers, and glue formers 4 and 5 in position, when dry add the other side, checking that the top of the wing mounting is level. Whilst this is drying, cut two 4in long 1/16 sq strips from the sheet balsa and glue to the inside edge of the cabin area to make, an 1/8 in wide wing mounting. Hold the rear of the fuselage together with a paper-clip or clothes-peg and check symmetry before adding former 6 and gluing the sides so that they taper equally.

Formers 2 and 3 hold the CO2 tank in position and whilst 3 is flush with the top of the fuselage, 2 is set 1/8 in lower to allow clearance for the copper pipes to the filling nozzle. The engine former is made from two laminations of 1/16 sheet with the grain of the balsa at right-angles and then faced eith 1/32 ply. For ease of assembly, mark and drill the engine mounting holes before gluing the bulkhead into position. Use sheet with the grain across the fuselage between former 5 and the tailplane mount on the top; and between former 4 and the tail on the bottom..." 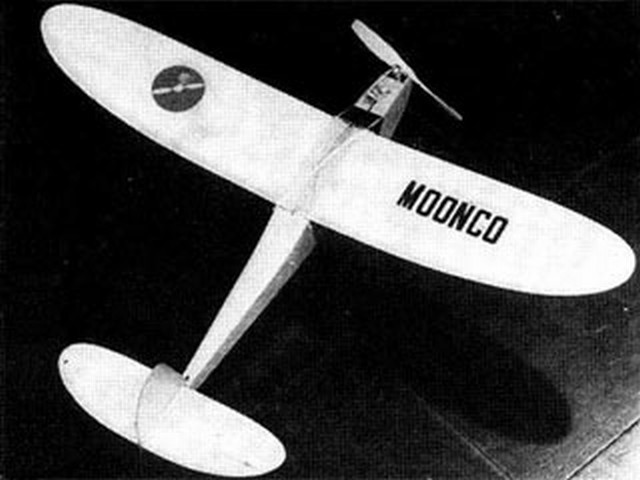