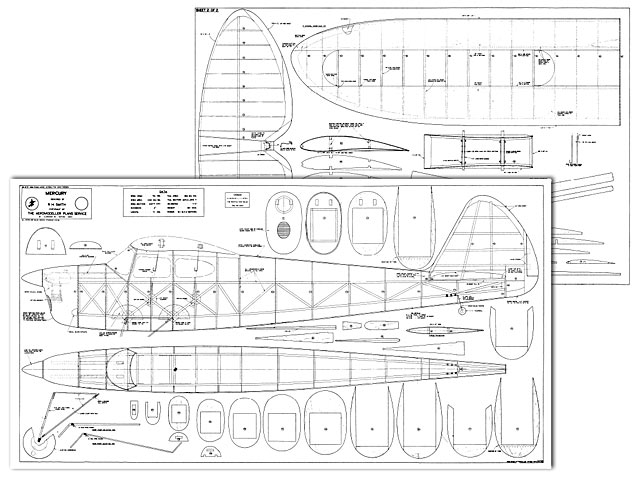 Quote: "THERE'S a strange fascination about a big model, and when full-scale realism is incorporated in pleasing lines such as we have in Mick Smith's Mercury, the result is a design of distinction.

This is Mercury Mark IV. It was fitted with an American Forster 16 cc petrol ignition, as were its earlier versions, and it was built soon after Mick Smith returned to this country after service overseas with the RAF in South Africa and Rhodesia. As soon as it appeared at the first large rallies after the war - the big Midland Area do at Walsall Airport, the Northern Heights Gala and the first Nationals - it collected crowds of admirers, and many a sigh of appreciation.

Mick would swing the great big prop, slowly trim the butterfly throttle and needle valve for near maximum revs, then with a slight push to get things moving he would release Mercury for a long bouncing take-off, followed by a beautifully stable flight. In those days, the 16 cc Forster was the only motor available that would pull the five pound model into the air. With slightly revised construction, the version now available in Plans Service is suitable for any 10 cc engine of reasonable reputation; the Super Cyclone is shown on the plan, but the Ohisson, Atwood, Fox, Micron or Nordec would do as well, and the Anderson Spitfire 64 would be ideal.

The prototype will not be remembered only for its performance in the air, for no doubt many of our readers will find its outline familiar, and recall the Third National Model Aircraft Exhibition in 1946 at Dorland Hall. It was there that the Mercury stole the show and won the Senior Championship Trophy for its constructor. The magnificent finish of this eight-foot span winner had to be seen to be believed, and even though displayed so that a plan view could be obtained, it was impossible to see and appreciate all of the intricate cockpit interior detail. Through the opening cabin door one could have access to real cockpit controls.

The choke and needle valve mixture controls were operated by push-pull knobs on the dash-board, whilst the ignition advance-retard could be altered with movement of a quadrant. All that was needed to make the realism perfect was a dummy pilot.

Duplicate Mercurys have been built from plans in circulation among Rick's South African and Rhodesian contacts. All give the same high quality performance, and it would not in the least surprise to learn some day that a radio-controlled edition has been flown. For the sport flier who likes some-thing big, with plenty of room in the engine and radio departments, this model is a certain first choice.

Incidentally, we might also mention that this is one of the biggest plans in our range, the total length of the two 38-1/4 in wide drawings is no less than eleven feet, all crammed with detail. In addition, a special set of building instructions, plus of course the APS transfers, are issued with each set of full-size plans, price 12/6 post free from the Aeromodeller Plans Service." 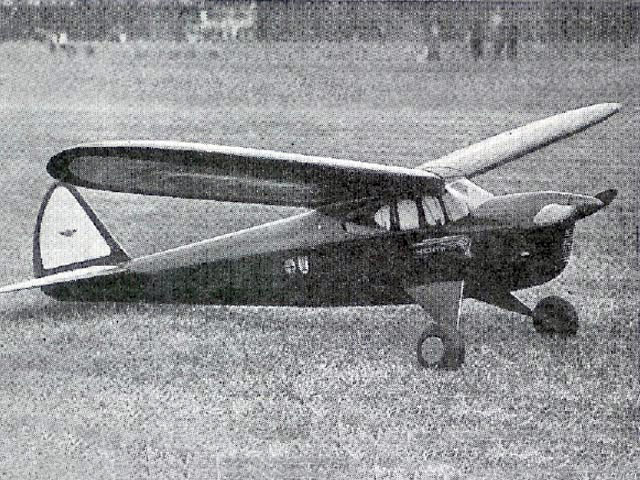 There's a useful page with notes on the Mercury design and links to more info at ColinUsher's site: http://www.colinusher.info/Model%20Aircraft/mercury.html
SteveWMD - 29/03/2014
Hi Mary, I have found the pictures of the Mercury IV, see attached [more pics 004-007]. There is one pic of the Mercury in flight as it was taking off, the others are in my back garden.
TerryBrown - 09/09/2016
Hello, I have the plan and a laser cut kit of parts for this model but was wondering if you had by any chance any building instructions for the lovely model.
JimHarris - 19/02/2017
We have the original magazine article, but it doesn't contain any building info. Can anyone help Jim?
Mary - 19/02/2017
I have attached a brief document by Colin Usher with a few building instructions [see supplementary 'Construction' file] found some time ago at wwww.colinusher.info (this link seems to be dead now). I hope Jim finds it useful.
alcalaino - 20/02/2017
Many thanks alcalaino :) Colin Usher's site seems to have disappeared. I have noticed that all our links to his site are broken. Does anyone know what has happened?
Mary - 20/02/2017
Pleased to say that I have downloaded the Construction notes for the Mercury, thank you again. I was wondering if to go with the plans there was a material list required to build this model otherwise I will have to get pencil and paper and a rubber to work it all out. Many thanks again for all of your help.
JimHarris - 24/02/2017
Thanks for posting the plans for The Mercury - it was a fun build. Here are a few pictures of the build [more pics 010, 011]. Maiden flight will be posted on You Tube soon.
OldHippie_HillbillyAirRC - 16/05/2019
Add a comment