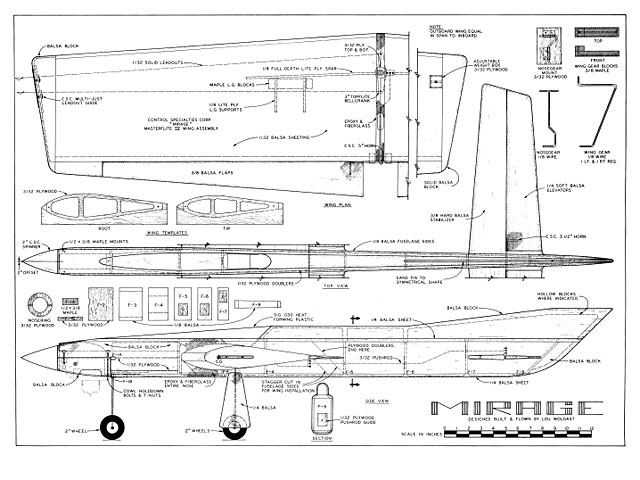 Quote: "A sleek new precision aerobatic ship that's gone through the developmental stages and has come out a winner is presented here. Some new thoughts on stunt, by Lou Walgast.

The Mirage is like so many other stunt airplanes in that it represents an evolution of many designs. The formulation of these ideas begin with my experience with an airplane called Genesis (oz7572). After a local contest, Bob Hunt offered me his (the same one that won the 1976 Nats for him). Needless to say, I was much impressed by the handling characteristics. Here was an airplane that would groove and yet corner as tight as I could dial in a corner without any hesitation.

The 1976 Nationals also provided me with more ideas to draw from. Les MacDonald must have wondered whether or not to have the guy with the tape measure going over his airplane removed from the pit area. The following season saw a slightly evolved Stiletto (oz6665) on the contest scene. This airplane had enlarged tail surfaces and short (by 46 type standards) moments. Close to what I wanted, but still room for improvement. I decided to put tail surface span at 1-1/2 the wing and 26% of the wing area.

The next area of question was thrust line. Investigating an inline setup as used on the F-105 of Bob Hunt, or the F-16 of Lou Dudke, proved worth the effort. An equal turning airplane, provided all surfaces are aligned properly.

The last major problem to consider was landing gear. Have you ever gone to a contest and wondered whether or not your taildragger would make it off that gorgeous tundra? Or better yet, finish that fantastic pattern only to have the airplane nose in when the wheels caught in heavy grass. The only problem to this point with trike gear was basically weight. The addition of 2 oz or so of weight to a competitive airplane is close to a mortal sin. To combat this problem, the rear gear was moved forward to 1in behind the CG, and the front gear as far forward as the engine would allow. The addition of 2 oz. to the nose was by now a normal occurance in the form of noseweight anyway, so another item was eliminated.

To sum up, I now had an airplane capable of grooving, cornering, taking off and landing anywhere, and it didn't look bad either!

The profile of the airplane is the result of literally dozens of sketches. First of all, set up a piece of paper with spinner, wing and tail surfaces in side view in the desired moments and thrust line. Next, sketch in the parameters, such as ground clearances, overall length and height. All that remains is fitting the pieces together. An additional help would be an isometric drawing. This I needed in developing my paint scheme to get a good overall view of what the colors and trim would look like.

It also helps to have a friend with a good eye for color and designs right about here, and such a friend is Les Demet. Les is the type of guy that can build a Nobler and paint it so beautifully that you completely loose all thoughts of it being a 20 year old design.

Building notes. The construction phase is typical for a foam wing airplane. The plans show all the necessary items to make a special note of. As an additional help, remember alignment. Measure and align all surfaces and compo-nents before final assembly. There are enough other variables to consider without also trying to compensate for a slightly off surface somewhere..." 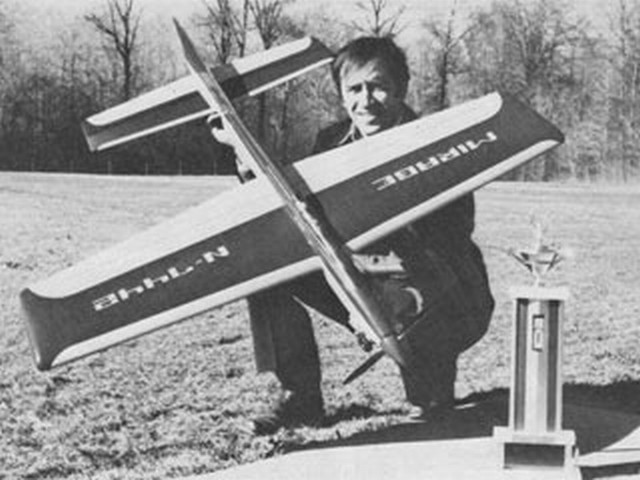