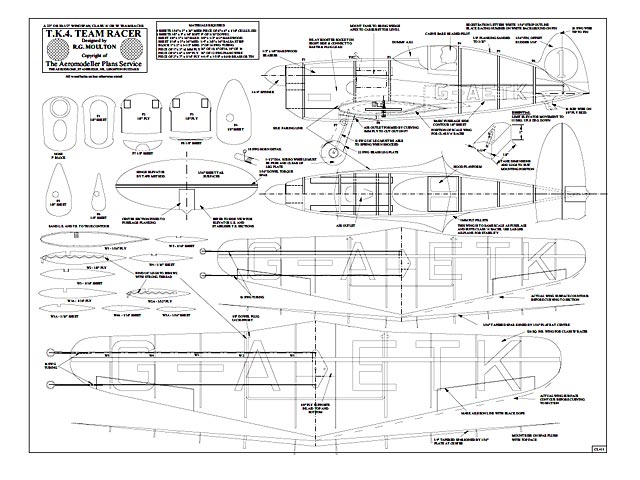 De Havilland TK 4. Team racer for control line. For Class A or B. It was published in January 1951 Aeromodeller and follows the original team race ideal of looking like a real racing aeroplane. The plan shows two different wings: one at 23in and one at 30.5in.

Quote: "Of the few British aircraft which have been specifically designed for air racing, the De Havilland Technical School T.K.4 appeals as the prettiest and most adaptable type to be built as a team racer. But the tiny 56 sq ft wing area of the full-size craft, and its comparatively large fuselage, produces an equally elephantine model fuselage if the wings are to be scaled to the minimum 125 sq in. This Class B design is actually a compromise in scale, with the fuselage built to the smallest size capable of absorbing a 5 cc engine, and the wings and tailplane enlarged to another scale to provide the necessary 125 sq in.

Using the same fuselage, however, and wings to the fuselage scale, one has an ideal class A racer of just over the minimum 70 sq in required. Retention of the larger class B tail is recommended as an aid to longitudinal stability for the smaller model. The actual scale surfaces would be a diminutive 12 sq in.

Small blisters at the wing and tail roots, the pitot head, and undercarriage jacks are completely omitted, while the cabin windscreen has been made one-piece without the bar down its centre and the undercart is sprung and raked forward. These are few of its discrepancies, which must be tolerated in lieu of efficiency.

And what efficiency! The prototype weighed 25 oz exactly, was equipped with a little-used McCoy 29, and an unfinished Stant 8 x 8 in prop. It had an unsprung 10 swg piano wire U/C which projected from the wing at 900.

The very first flight sorted out the impracticability of that U/C, for the gliding speed had been sadly underestimated. After the first take-off (which revealed the folly of having the wheels in scale position and the need for sweep forward on the U/C), we were more than satisfied that the 20% tail was of ample size. Excess elevator movement can make the little crimson speedster jump around like a high-speed stunter.

And the speed? Checked by three watclits at the East London Club speed contest at 88.8 mph; it held that speed over the duration of the engine run. With pit stops cut down to a possible 15 seconds each (the inverted engine is a first time starter), any decent ringed racing motor should take the TR TK4 over ten miles at an average of over 70 mph. Full building instructions are issued with the plan." 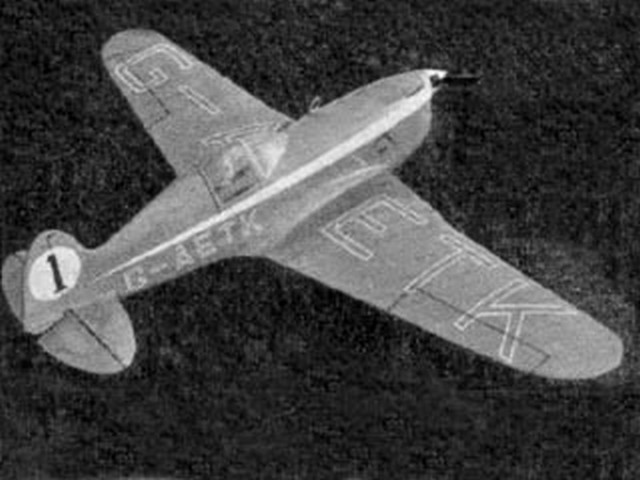