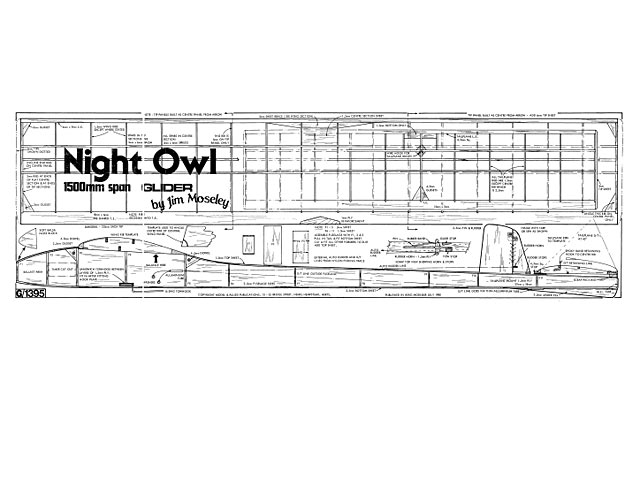 Quote: "DURING THE SPRING of 1978 I assisted my elder son Kevin, then 8 years of age, to build his first glider from a kit, which subsequently demonstrated the fact that the flying ability of a small cabin design is not necessarily as attractive as its illustration upon the box! In this instance, even I had great difficulty in towing the model to any appreciable altitude, and Kevin found it impossible to handle at all with his very limited skills.

After putting aside the pieces, I reasoned that the prime requirement was; for a glider of moderate size, and thus possessing greater inherent stability; which would be simple enough to build to be within the 'attention span' of a youngster, yet strong enough to stand up to some considerable abuse; and still fly well enough to be satisfying.

So Night Owl took shape on paper, prime importance being given to stability and strength with the structure kept simple, and performance a secondary consideration. A flat bottomed wing section was chosen for ease of building for rib cutting, assembly and eventual covering. The 12-1/2% thickness aerofoil was selected to give a thick wing that would be resistant to both warps and towing stresses.

All parts for the initial model were totally prefabricated by myself as a kit of
parts, and Kevin then assembled them with a minimum of supervision, a procedure which surprised me with regard to the speed of construction compared to the equivalent time input required for an F1A glider. Given this preparation an experienced modeller can then have the entire airframe ready for sanding and detail work in less than five hours; compare that to an A2!

The second, and most pleasing surprise came on the occasion of the models' first outing in October 1978 when, after a little hook adjustment, it proved viceless to fly in all respects with a slow, bouncy glide which was in excess of all expectations. Kevin promptly set out to learn the art of towing, initially in light breeze conditions and eventually in quite strong, gusty winds, during which time the model has stood up to a great deal of abuse, demonstrating a reserve of stability sufficient to enable it to recover from the most horrifying manoeuvres without impact or damage, even though this 250gm lightweight has been known to break a 15kg BS line on at least two occasions.

Still air performance of both of our models is consistent at approx 2:20 in flat calm, freezing conditions from a 50 metre line, but they show an ability to ride very weak lift that an A2 might pass through almost un-noticed.

A pointer to its potential is that Kevin, in his first-ever SMAE contest, won the Top Junior plaque with the highest Northern Area glider score of the day in an Area Centralised event during 1979, following this up with a 3rd place and Top Junior in a subsequent N Area contest, during which he produced one of the only two maxes recorded that day in pouring rain, and eventually - at a windy Northern Area Rally - 5th place, and once again, Top Junior. Admittedly luck played a major part in his successes as his skills are still being developed but nevertheless, Night Owl has proven to be a most satisfactory model and morale booster for a young flyer.

FUSELAGE: Mark out one fuselage side onto a piece of firm 2.5mm straight grained balsa, cut out the side and use it as a template to cut a second from the same sheet of balsa, and mark up both with former positions.

Cement formers 3 and 5 to one side ensuring that they are square and vertical and when thoroughly dry, glue the other side into its position. Once dry, pull in the nose and install former 1 and carefully mark the centre point of the lower edge of formers 3 and 5 in pencil or ballpoint.

Now take a piece of firm 2.5mm sheet, slightly wider than the maximum fuselage width, and lightly rule a centre line down its length; pull in and cement the rear ends of the fuselage sides together, positioning assembly over the marked sheet to line up with centre line and ensure that the fuselage is true and straight. Apply white PVA glue to the lower edge of the sides from former 3 to the rear..."

Note the model pic - showing the original prototype Night Owl model - was posted online by the designer himself (in response to Algy2's post) at: https://www.rcgroups.com/forums/showpost.php?p=20564253&postcount=199 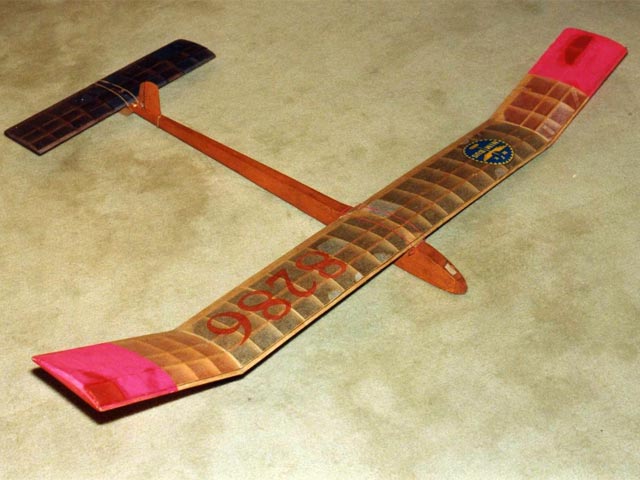 Night Owl was my first real proper model build. I was given a copy of the Aeromodeller magazine the Night Owl plan appeared in, and a starter pack of balsa by my (late) Uncle Peter, an ex-RAF fitter. The model took several months to build, and lots of mistakes, but flew successfully. I kept the plan and made another when I first got back into the hobby around 2010. Pictures sent in.
Nick Ward - 18/06/2021
Photos of Night Owl, please find attached [pics 005-07]. Flew brilliantly off a 60 metre line in cold, flat calm, with a micro servo operating the rudder tab to keep it from flying away! Averaged 1-1/2 to 2 mins in above conditions - really nice glide when trimmed up. Best rgds,
Nick Ward - 18/06/2021
Add a comment