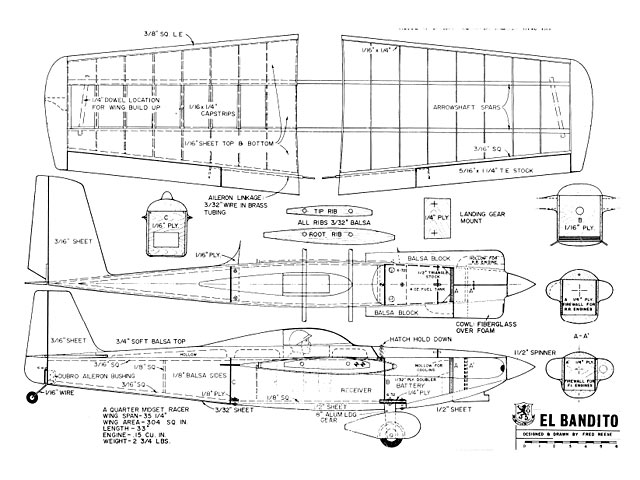 El Bandito. Radio control pylon racer from Fred Reese for .15 motor, a Quarter Midget Pylon Racer. Contest winning design by one of R/C's most prolific designers. Only the root and tip wing ribs are shown - use sandwich construction method to make all the ribs in between.

Quote: "The El Bandito Quarter Midget racer is a race-proven design having won three of the last four races entered and ending up as the 1972 QMRC Southern California Champion. The El Bandito has raced against and beaten the fastest Southern California racers. It has turned in the fastest time of the day on a very short course and on a two mile course. The two mile time was 2:07 on a three pylon course.

The El Bandito is very close to my Shoestring (oz7122) design which was published in the June 1972 issue of, RCM and was actually built from a prototype 'House of Balsa' Shoestring kit. After building two Shoestrings, I knew the design was sound but I wanted something different while still maintaining the same general outlines. The Sleek Frenzel El Bandito was the most logical choice as it only involved dif-ferent tail and wing tip outlines as well as relocating the canopy. The scale color scheme is overall red with a gold spinner and leading edge trim with white lettering and numbers. (Number ten is the scale racing number and also my QMRC racing number.)

The major reason for the success of the El Bandito is the wing. The root section is a very low drag laminar flow symmetrical airfoil which tapers to a lifting airfoil at the tip. The tip airfoil was chosen for its low drag at high angles of attack which really- helps in the turns. The El Bandito can easily turn inside most racers and generally has a speed advantage down the straights because of its overall low drag. The wing has excellent stall characteristics which maintains positive aileron control at all speeds and allows very slow, nose high landings. Incidentally, the wing is ten percent which makes it legal by all rules.

My El Bandito is powered by a stock ST .15 FI RC engine which was very carefully and slowly broken-in. A break-in that is too fast will result in a mediocre engine that will wear out quickly. Just running a couple of tankfulls and then flying will ruin a good lapped engine. The people who are winning are the ones who put out a little more effort than the others. Many of you will be buying the new K & B rear valve .15 now, so break it in slowly and wear ear plugs during any engine break-in to prevent ear damage! Plan on about two to three hours of running time starting very rich and gradually leaning out until the engine will hold a maximum rpm setting without oscillation... " 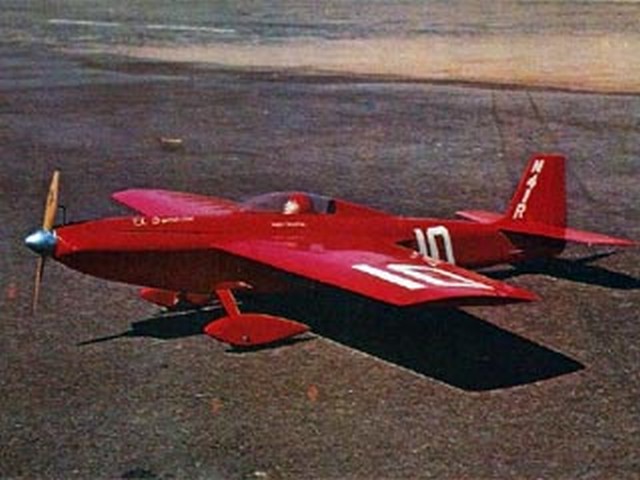