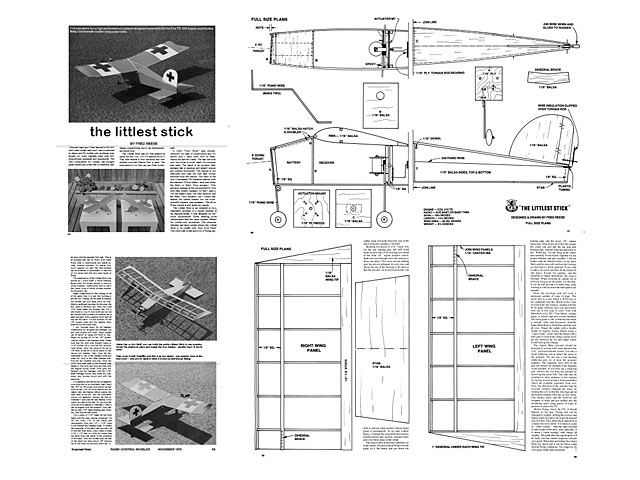 Quote: "Several years ago I first learned to fly R/C with pulse rudder radio and I have continued to design and fly rudder-only airplanes even though my main interests were with full proportional airplanes and equipment. The Ace Commander RC system has brought pulse rudder into a new era of reliability and design possibilities due to its lightweight and small size.

The Littlest Stick was my first attempt at using the tiny Cox .010 TD engine for R/C. This little engine is truly amazing and very reliable provided filtered fuel is used. The inexpensive Cox fuel can cap filter works well.

A little Ugly Stick (oz5175) was chosen primarily for ease of construction and flyability and I have built five of them during the last two years. The last one took only two hours to build, ready for covering and paint. The result is an exciting little airplane that is practical and doesn't require any special equipment. The engine is not restricted and uses the fuel tank mount supplied with the engine. The radio is the Ace Commander DE Superhet receiver with the standard 225ma battery pack and either the Baby or Baby Twin actuator. This airborne package is the one supplied by Ace with their system package. At first I used a 100-ma battery back, the Gem receiver, and the Baby Twin actuator, but I found that neither the lighter system nor the more powerful actuator was necessary. The all-up flying weight is still under six ounces.

The Littlest Stick is not intended to be a beginner's airplane or a trainer because of its responsiveness. It was designed for the ' more experienced flyers seeking more performance than the usual trainers offered for rudder-only equipment. The generous dihedral and large rudder allows the Littlest Stick to do rudder rolls from level flight. The climb rate is fast and a lot of flying can

be done with the standard fuel tank. This is an airplane that can be flown from small flying sites or schoolyards and makes an ideal vacation airplane. No matter how much luggage you take, this little airplane can be squeezed in somewhere. A half-pint of Cox racing fuel will give many hours of flying.

The construction of the Littlest Stick is as simple as I could make it while keeping things light, but strong enough to survive minor mishaps. Construction time is just a few hours, most of which is spent waiting for the glue to dry.

Begin construction by first cutting out all of the parts; then it is just like building a pre-fab kit. Cutting out the parts is actually the hardest part and takes about an hour. Make a cardboard template for the wing ribs and, using a ballpoint pen, trace onto light 1/16 sheet balsa, the thirteen ribs. Put a new blade in your X-Acto knife and cut out the ribs and then pin them all together into a stack and sand with a sanding block until all ribs are the same. Cut the notches for the 1/8 square spars and the leading edge while still in the block form.

I use 5-minute epoxy for all fuselage construction for its speed and strength, but any type of glue will work. Some weight can be saved by using Hot Stuff or Zap. Begin by gluing all of the 1/8 square vertical pieces to the fuselage sides. Please note that the right side firewall brace is 1/16 further aft to provide the required right thrust. Also, the piece at the tail is 1/8 short at the top to allow space for the torque rod bushing. Next, glue the two bulkheads to one of the fuselage sides and when dry, glue on the other fuselage side. Pull the tail together and glue. Bind the 1/16 wire nose gear to the firewall with thread or fine wire and glue and then drill the engine mount holes. Now glue the firewall into the fuselage..." 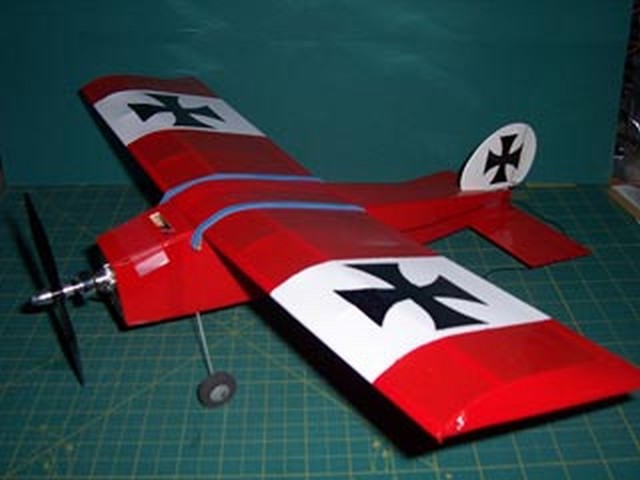 Steve, I just finished building the Littlest Stick by Fred Reese downloaded from Outerzone UK. It has flown several times successfully and here are the changes made and equipment used: Went electric and 3 channels, R,E & T. Turnigy 10 gram outrunner w/ 5x4.3 GWS prop; GWS 72 Mhz Rx; Unknown but small ESC; Turnigy 180 2S Lipo; Bluebird 3.4 gram servos. It flies well at 1/2 throttle and gets a solid 5 minutes with the battery currently being used. It needs a 250 or 300Mah I think. I used CoverRite Coverlite, red of course, and white Monokote on the vertical. The white on the wings is Tamiya flat white rattle can enamel and the Maltese crosses were made with paper templates and a black Sharpie marker. Thanks for the plans...
DaveB - 07/04/2014
Hi Steve, thanks for all the good job you're been doing. I've built the Littlest Stick by Fred Reese, since I had been dreamin' about it for 30 years. I have the original plan on an old RCM magazine but being able to download and print the pdf plan really got me started with the build. Covered with yellow Oracover, silver original Monokote from the '70s (yes!), white tape on the fin, checkered tape, ink-printed crosses. I've flown it succesfully 3 chs with Futaba radio, 2 HK micro servos, 10A ESC+Turnigy outrunner. But the greatest fun was building it ;) Hope you may like some photos [see more pics 003, 004]. Feel free to put some on the website if you like them. All the best, and keep up the good work. We not-too-young Sunday Flyers love Outerzone!
RaffaelloBisso - 09/06/2014
Add a comment