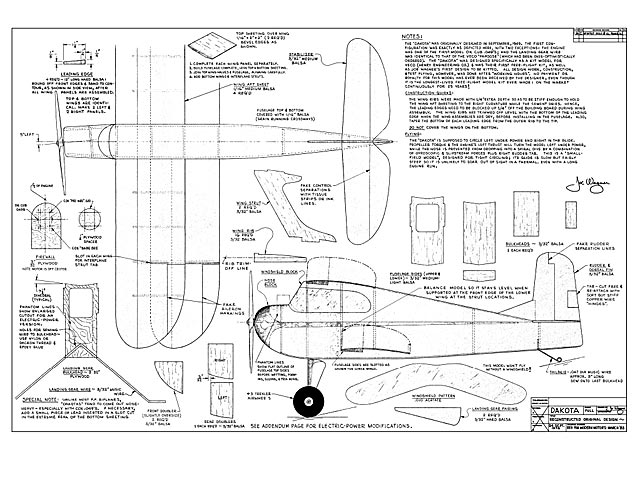 Quote: "The Dakota was originally designed in September, 1949. The first configuration was exactly as depicted here, with two exceptions: the engine was one of the first-model OK Cub .O49's; and the landing gear wire was identical to that of the Veco Papoose (which had been over-optimistically ordered).

The Dakota was designed specifically as a kit model for Veco (Henry Engineering Co) and was their first free-flight kit, as well as Joe Wagner's first design to be kitted. All design work, construction, test flying, however, was done after 'working hours'. No payment or royalty for this model has ever been received by the designer, even though it is the longest-lived free-flight model kit ever made: on the market continuously for 25 years!

Construction quirks: The wing ribs were made with 1/4 in extra depth so as to be stiff enough to hold the wing aft sheeting to the right curvature while the cement dries. Hence, the leading edges need to be blocked up 1/4 in off the building board during wing assembly.

The wing ribs are trimmed off level with the bottom of the leading edge when the wing assemblies are dry, before installing in the fuselage. Also, taper the bottom of each leading edge from the outer rib to the tip. *Do not* cover the wings on the bottom.

Flying: The 'Dakota' is supposed to circle left under power and right in the glide. Propeller torque and the engine's left thrust will turn the model left under power, while the nose is prevented from dropping into a spiral dive by a combination of gyroscopic and slipstream forces plus right rudder tab.

This is a 'small-field model', designed for tight circling; its glide is slow but fairly steep so it is unlikely to soar out of sight in a thermal. Even with a long engine run. [signed] Joe Wagner."

Article. Titled 'Dakota Beginnings' and written by Joe Wagner, this is a 3 page extract from the Oct 2012 'Gas Lines' newletter (Southern California Antique Model Plane Society), thanks to dfritzke. 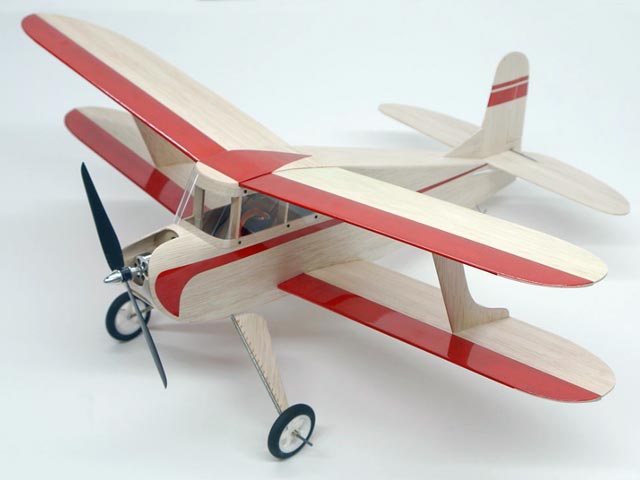