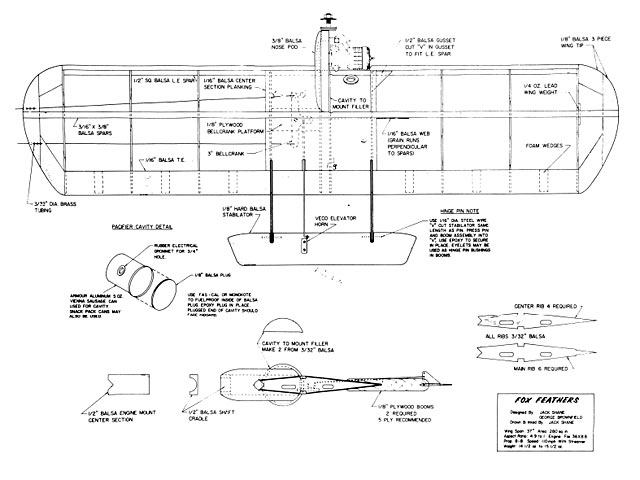 Quote: "Fox Feathers. Control Line Combat is probably one of the most demanding and exciting events in model airplane competition. In order to achieve some degree of success in Combat, several factors must combine, all at the same time and in the right place. First and most important, you gotta get lucky. There is no need to expand on this for the veteran Combat flyer, and the novices won't believe it anyway.

Next in importance is experience and flying skill. Both of these factors are relatively easy to come by if you are willing to spend countless hours and many gallons of fuel in prac-tice. Probably it is worthwhile to say a few words about how to go about practicing. It will do you very little good to go out in the circle by yourself and zing around at 110 mph. The thing that does you the most good is to find a friend (or enemy), tie a streamer on and run at each other for hours at a time. Actually the more people you practice with, the better off you are as you get a look at many different styles and techniques which helps prepare you for the contests. This practice is, without a doubt, going to cost you a good many airplanes and a few sets of lines, but it's the only way to get sharp.

Another very important item in this game of combat is the airplane system consisting of airplane, engine and fuel feed, and that's really what this article is all about. When my flying partner Jack Shane and I started developmental work on 'Fox Feathers' we listed certain criteria that a good Combat airplane must meet. The airplane must be:

Fast.
Light.
Strong and maneuverable.
Quick and inexpensive to build.

Fox Feathers is a compromise design incorporating the above criteria to the highest degree possible, and it is based on successes and failures of six long seasons of Combat competition.

In order to meet the requirement of quick and easy construction, a diamond airfoil is employed. This feature allows the airplane to be built while pinned flat to the table without the use of jigs and it results in a straight, warp-free wing. Also, the diamond airfoil allows maximum utilization of a sheet of balsa which is important unless you happen to be independently wealthy.

The leading edge of the wing is recessed approximately 3/8 in, allowing the engine to be set back, moving the cen-ter of gravity aft which results in ex-tremely tight turns. The stabilator is notched to allow the booms to extend into the control surface, and the hinge pins are located approximately 1/4 in behind the leading edge of the stabilator. This technique results in a form of aerodynamic power steering which makes for very fast but smooth turning.

Fox Feathers is also a strong airplane. Some of the kits which are avail-able today have been noted to shed their outboard wings during violent high speed maneuvering. We designed Fox Feathers to eliminate this deplorable condition. The Snack Pak can pacifier cavity is very strong and carries the stress loading across the gap left by most cavity designs. In addition, we added a 1/2 in gusset between the rib outboard of the cavity and the leading edge for a little extra margin of strength in this critical area.

During the rigors of competition, Fox Feathers has withstood numerous pancake landings at speeds in excess of 100 mph, mid-airs and cut-line fly-aways with minimal and repairable damage; and with the Snack Pak can cavities, we have yet to break a pacifier because of impact induced loads.

As stated earlier in the article, Fox Feathers is light, about 15 ounces with all the running gear installed, so the strength of the airplane is due to design and construction instead of mass and brute force design techniques. Use a good grade of wood, good assembly practices and epoxy in the areas of the motor mounts, booms and pacifier cavity and you will have art airplane which will stand up to unbelievable torture and come back for more.

You will notice from the plans that there has been no provision made for installation of a conventional tank in Fox Feathers. The reason for this is two-fold..."

Quote: "Built one of these in the early 70s but I don't know where the plan came from (either MAN or American Modeler) flew like it was on rails and with a slightly modified Fox 36X it was downright explosive." 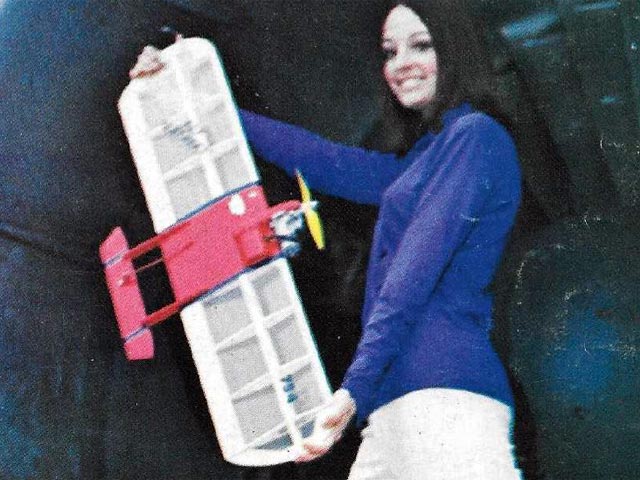