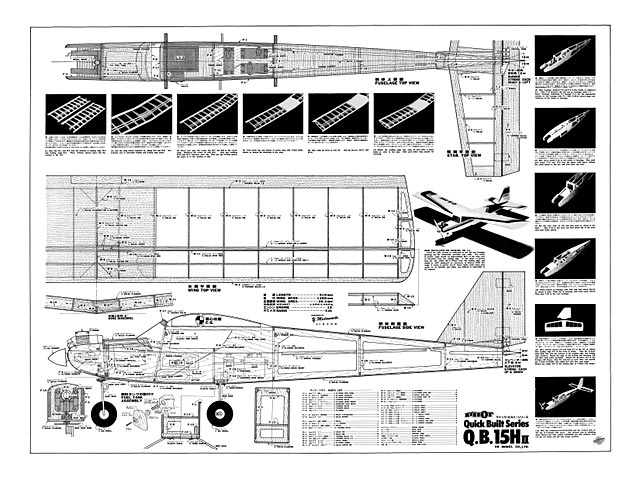 Update 15/08/2018: Replaced this plan with a (massively) clearer version, thanks to AlanSinclair. 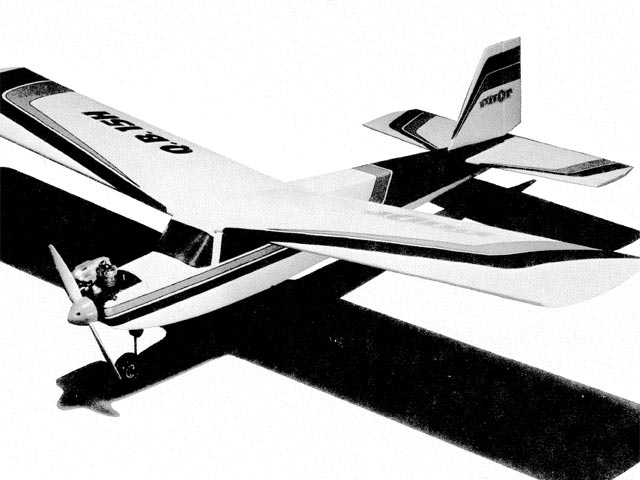 The QB 15H II was produced circa 1981--1987. The original QB 15H had an aluminium main landing gear and hardwood engine bearers instead of a moulded plastic engine mount. Both are great airplanes, but I though the original was a little lighter and flew better.
anon - 27/10/2012
I am the anonymous author of the previous comment regarding this plan. I just wanted to add that the QB-15 is a little underpowered--by my standards anyway--with a .15. Friends and I built several of these back in the late 1970s, and powered them with everything from an Enya .15 all the way to an OS Max .30. With the big engine we had unlimited vertical capabilities and even used the airplane as a glider tug for my Mark's Models Windward (Wow--did I ever date myself here!). It's just a great airplane.
Moeregaard - 07/01/2013
I have fond memories of the QB 15. After using it to really learn powered RC flight, a friend of mine presented me with one attached to a Fox .40, after he crashed my Midwest Trainer 40 during a training flight. Talk about vertical performance! This little guy would climb out of sight on its tail. Even though we had to add several ounces of lead to each side of the vertical stabilizer! What a great little trainer and high performance aerobat.
SenaMulder - 16/04/2014
I learned to fly on a QB-15HII back in the '80s while stationed at RAF Upper Heyford. We flew off the antenna farm of RAF Croughton's nicely mown grass. When coupled with an Enya 15, this was a great flying model. I wish I could find another kit, building it from a plan would not be the same.
Revell_Walker - 18/09/2018
Hello Outerzone Team, I send you pictures [more pics 004-006] of my QB 15H II (1983) and also the Japanese original manual which was included in my kit... Greetings from Switzerland,
René Walther - 15/01/2020
Add a comment