This little ship won the Best Workmanship (Foreign) Trophy for the author/designer in the 1976 Model Builder Proxy Peanut Contest. Jean-Francis sent us his excellent inked drawing so we could publish the plans. Unfortunately the drawing is a little too big to fit Model Builder's pages. Rather than re-duce the whole plan photographically by 596, we have taken the liberty of cutting and relocating certain portions of the drawing. It's a tight squeeze, but it's full size!

Incidentally, Jean-Francis also wrote the article, in English, to go with the drawing, and apologized for his linguistic errors. Proof readers should have it so easy! We have taken the liberty of leaving the article pretty much as is, in order to retain the flavor.

The old aeronautic publications are treasures for the 'cacahuetes' builder. Examining a collection of papers pub-lished in the journal L'Aero (1911-1912), I discovered among other 'Belle Epoque' models this aeroplane with racy and elegant lines, designed by Henri Lemaitre et Gaston Legrand. Its name: L'Hirondelle.

Good areas, good ratios, dihedral, this is, for the French modelers, beginners in Peanut contest, the ideal 'cahier des charges' to select a cacahuete model.

My first model was tested outdoors (poor, poor modelers of Marseille who have not your fabulous gymnasiums!) and the flight, after dihedral adjustment, appeared stretched and swift. Really a swallow. My second model was built to enter the famous Model Builder's PPPP.
I offer you its description.

CONSTRUCTION: Building begins with the construction of the two half-wings and stabilizer. So, this elements can dry pinned on the work board while you build the fuselage. The ribs are 1/32 light balsa, sliced with the help of two shapes. The three tip ribs are only shortened at their leading edge. The wing tips are made with laminated strips glued together but can also be made with formed rattan. The spars (3/64 medium) extend 1/8 inch farther the root rib, and then position the wings when they are fixed.

The first one rests on the spar of the fuselage, the second one under (a small square hole is cut in the covering of the fuselage). So, the incidence angle will be obtained..." 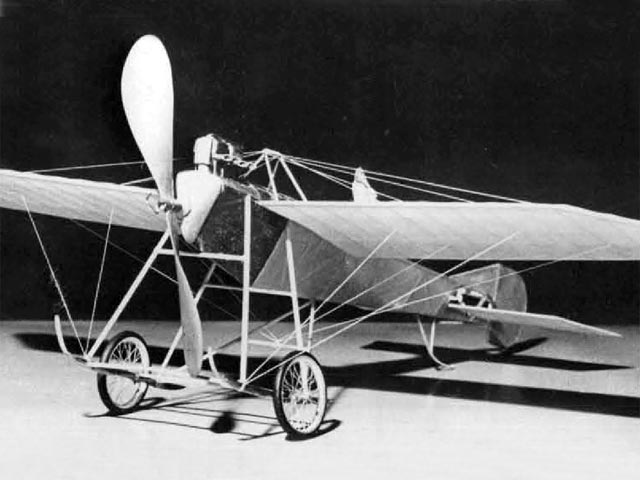