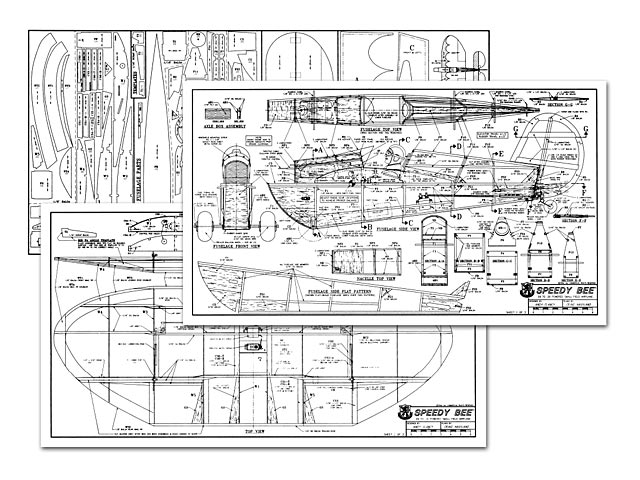 Speedy Bee. Sport model for radio control. This plan was published in RCM and later kitted by Clancy Aviation.

Quote: "Are you tired of planes that all look alike? Would you like to fly more but you don't like the long drive to the flying field? Well, have I got a plane for you! The Speedy Bee can be flown almost anywhere - you don't land it, you park Wits spring landing gear and balloon wheels allow it to fly from terrain more suited to R/C off-road cars than air-planes. Even though you may be able to fly it in your backyard, the Speedy Bee is such an attention getter, you'll want to take it to the flying field at least once.

With its low wing loading and mild control throws, its fairly easy to fly. But beware - this is no trainer! With maximum control throws, its responsive agility will satisfy even the most demanding pros. I flew my prototype with an 0.S. 26 Surpass 4-stroke and with the Model Electronics Turbo 10 electric motor. The plane performed well with both power plants, and any engine in the .09 to .26 range should fly it just fine. I use the DAD Tina microservos in my plane. They are probably the best buy in microservos today. Standard size servos could be used with a gas powered Speedy Bee, but the extra weight will increase your stall speed. I don't recommend using standard servos for an electric powered Speedy Bee. To save weight, I always use a 250 mAh receiver battery pack.

Electrification Modifications: I flow my Speedy Bee with the Model Electronics Turbo 10 System. No BEC was used. With ten 1700 mAh cells, it had ballistic performance. It is shocking to see an electric plane take off in under 20 feet and climb out vertically until nearly out of sight! A typical comment heard from other modelers while watching this electric-powered hot rod was: Gee, what kind of muffler are you using?

The drawback to this set-up is that it is a little heavy, so I tried using just 7-cells. The stall speed was noticeably slower and the performance was still impressive. I think an ideal set-up would be a 10-cell 1000 mAh battery pack and a BEC with the Turbo 10 motor.

I used the motor mount supplied by Model Electronics and I highly recommend it. The motor requires several degrees of up thrust and side thrust because of the high thrust line and the huge amount or torque. The battery pack was mounted on a 1/16 plywood shelf using plenty of Velcro. The shelf is glued on top of the lowest stringers and should be as long as the longest battery pack used. The shelf should be centered about the plane's balance point so that using different sized battery packs won't change the CG. A battery access door can be built into the side of the fuselage. I used an external charging jack. The dummy V-4 motor you see in the photos was made from Cox .020 heads, Peck Polymer's plastic cylinders, some aluminium tubing..." 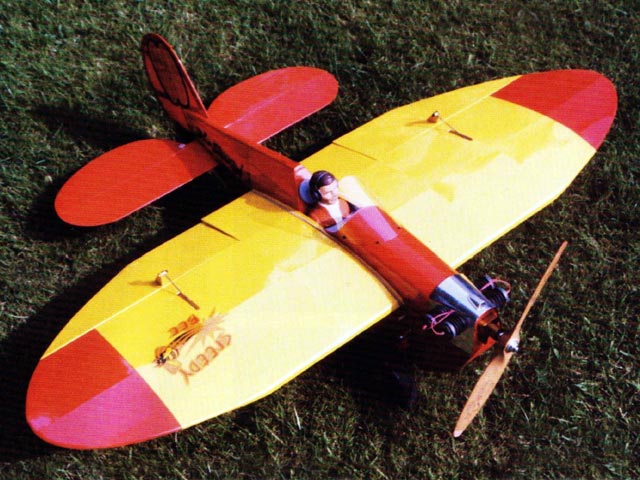