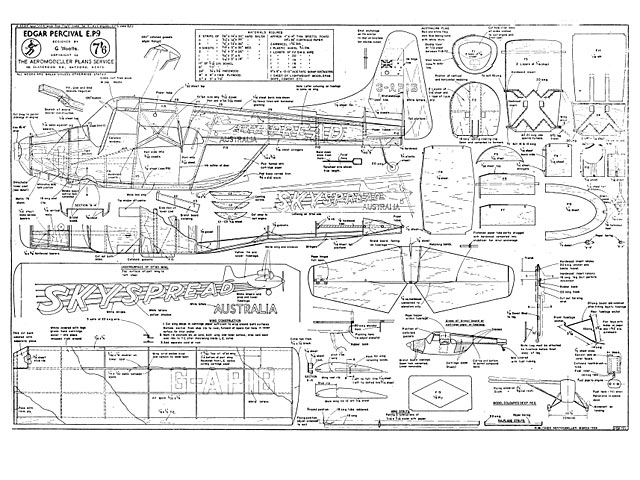 Quote: "As soon as George Woolls saw the E.P.9 'Aircraft Described' feature in our January 1958 issue, he realised that the cropsprayer was a perfect subject for a free-flight model. Proportions looked so right that no deviation from scale appeared necessary and the bright colouring of the Skyspread version was most attractive. Yet the thought of hours of work painting the inscription on tissues which can so easily be torn, did not have much appeal, something more durable in covering was needed.

Many years ago it was commonplace to make model aeroplanes from cartridge paper, and the use of this material seemed to be the answer. Besides being a good medium on which to paint, the lack of sag between ribs provides a good simulation of the stressed skin of the original aircraft. A test wing soon showed that there was no undue cause for concern on the weight factor and the final pair of wings complete with Ornamentation weighed only 2-1/2 oz. Cartridge paper was also used to cover the fuselage sides between the pod and stabiliser where they carry the inscription.

Another problem was the undercarriage, the wing strut passes very close behind the undercarriage oleo leg, the fairring of which has a cut-out to clear the strut. Any form of backward springing seemed to carry the penalty of knocking the wing struts out of position. After much thought a simple system incorporating a rubber sprung 'oleo' was used, which not only results in a very fair representaiton of the original undercarriage but seems to work well when the model lands.

A simple form of stretching wing strut was developed enabling a scale dihedral on the ground to increase to a safe flying dihedral in the air, where the deviation from scale is not so apparent.

Constructionally the model is orthodox except perhaps for the wings, so a few extra words of description of their construction may not go amiss..." 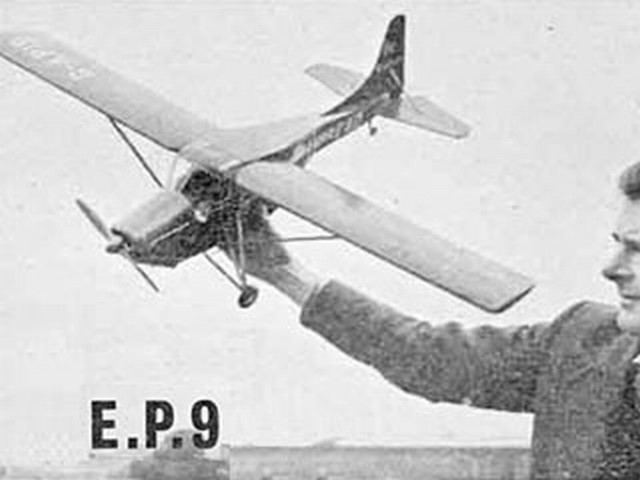