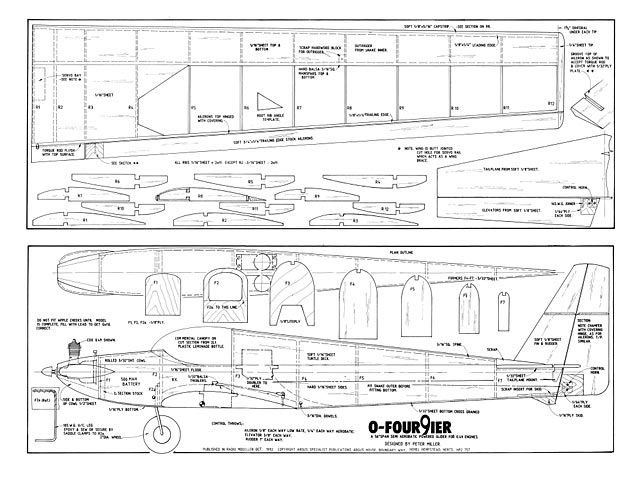 Have you ever seen the acrobatic display put on by the two full-size Fournier powered gliders? The slow, graceful manoeuvres, the incredible mirror flying with the top aircraft inverted on a dead engine. The display was such a contrast to the usual power and fury that it remained in my memory.

Most modellers enjoy aerobatics but many also like to have a chance and do some gentle soaring. I know that I like this variation but quite often I take a vintage model out and then wish I had taken an acrobatic model and vice versa! I wanted to combine the two types of model in one and decided that the Fournier would be an ideal subject. With a .8cc (.049) it would be a reasonable size and yet handy for transporting and could be flown almost anywhere with a PAW 80 Classic.

When I started drawing the model up I realised that there were snags. The fuselage was quite gigantic for a model of this size and the taper on the wing was rather excessive. I slimmed the fuselage down and reduced the taper on the wing. I added strip ailerons for simplicity but I kept the moments about scale, l also increased the tailplane size a little.

The resulting model has managed to keep all the atmosphere of the Fournier while being a more practical model design, The proof of this came when I took it to test at our flying site on a private strip. By sheer coincidence there was a full-size Fournier parked outside the hangar, the model was admired by all the pilots gathered there and no one really noticed the slimming down until it was pointed out to them!

Before beginning building it is important to realise that the scale moments will result in a tail heavy model. Use very light wood for the tail assembly - you could build it up out of strip wood. Do not beef up the rear end and make sure that you can fit a full-size 500 mAh battery in the nose. This is good policy anyway in case you hook a thermal. You will probably still need some lead but more of that later.

Flying. In common with the sensible practice being adopted by many writers these days, I am going to talk about flying before we get to the construction!

With the Cox Texaco under propped with a 8 x 3.5 Master prop the model is perfectly powered. It will climb steadily to sufficient height for three and a half minutes glide at least and yet it will do loops and rolls and Cuban Eights.

Once the model is trimmed, solo hand launches are easy, the model leaves the hand in a very smooth flat climb, no panic to get the launching hand to the transmitter stick. The launch only needs a gentle push, no running, no Tessa Sanderson imitations.

The ailerons are very effective, the 1/8th movement on low rate is almost too much for gentle soaring. The rudder is very powerful, the given throw of 1 in each way could be drastically reduced and I don't use it. Elevators are smooth and powerful.

For an aerobatic flight select high rates for the ailerons. Remember that you are flying on the wing, not the power. The model will not loop right after a roll but you can loop and do a roll straight after that. Loops are straight and round and easy, Rolls are not so easy. The roll rate is slow: put the model into a shallow dive, pull the nose up to a slight climb and hit the ailerons. Down must be fed in during the inverted part of the roll but take it off again or you finish the roll in a steep dive. OK to do a loop then.

The model has a fast, flat glide which can be made to slow up with about three clicks of up trim. All controls are still powerful on the glide and for soaring low rate should be selected for the aileron. Penetration is quite good..." 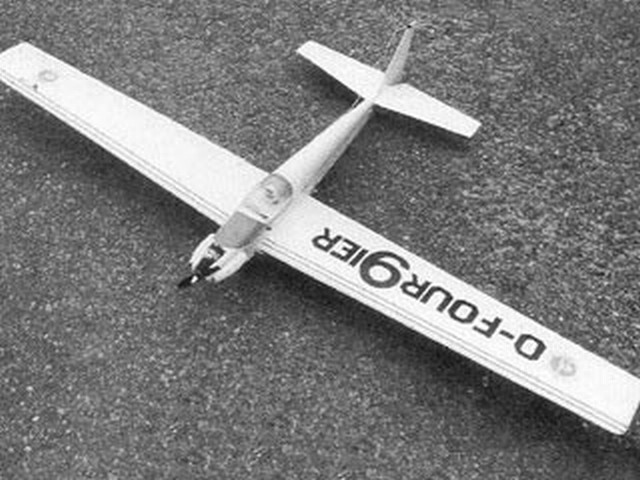 Hi Steve, I thought you'd like to see my build of the 0-Four9ier from these plans. Here's a video link to the show-and-tell I did of the plane at my club this summer (the Checkerboard Flyers in Forest Park, IL): http://youtu.be/V9psSfyO-0Y - Also I've included a few pictures that were taken that evening [see more pics 003-005]. I love the fact that you are preserving plans like these for future generations of scratch builders. Keep the love alive! Peace,
Ed P - 02/12/2013
Add a comment