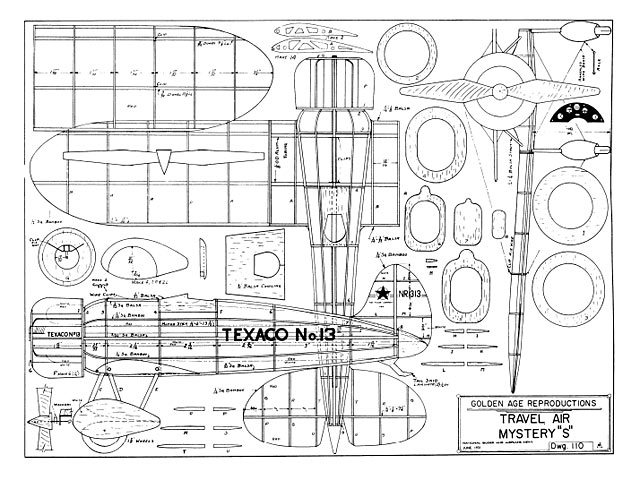 Fuselage: To start the construction of the Texaco 13 you must first select from your materials the piece of 1/16 x 6 x 36 in balsa wood sheet of veneer and from this material cut out the necessary formers as shown in the drawings figs.1 and 5. When these have been completed lay them out in their respective places from former No.2 to former No.7, using the 3/32 square balsa for upper, lower and side longerons. These longerons are all fastened to the formers with ambroid model cement, after which you may cut to the correct size the 1/16 square bamboo fuselage stringers.

When this much has been accomplished and allowed to dry, the tail block as shown in figs Nos.2 and 6 should be cut, sand-papered, and fastened tightly into place. The engine cowling consisting of formers f, g and No.1 as shown in figs.1 and 5 should now be cut to shape and assembled, taking particular notice that there are six formers 'f'.

The aluminum tubing shown in figs. No. 1 and 3 should now be cemented tightly to the formers 3 and 4 as shown in the same drawings.

A piece of 1/32 balsa wood is used for the cowling after being cut to the correct shape as shown in drawing fig.4. This cowling should be held in its correct position between the formers 4 and 5, small model makers pins are very useful in holding cowling in place while the ambroid is drying. The fuselage can now be laid to one side to thoroughly dry.

Wing Construction: The wing section of the Texaco 13 model consists of one right panel, one left panel and a center section to which the landing gear is affixed as will be described later. There are fourteen of the wing rib 'a' and two of the wing rib 'b' cut to their correct shapes from 1/16 sheet balsa wood. Lay out the five wing ribs as shown in fig. No. 7, 1-17/32 in apart using the 3/32 birch dowels as spars. All the ribs are cemented into place. Wing rib 'b' can now be set into place and also cemented.

Leading and trailing edges of 1/16 x 3/32 balsa wood is now cemented in the necessary wing slots. A piece of 1/32 square bamboo is bent to shape as shown in fig.7 and used for the wing tips. The best method of bending bamboo so that it will hold its shape is by steaming.

Each wing panel is constructed in the same manner except care should be taken that one is left and one is right. The metal clips as shown in fig.7 are fastened into place with cement. These clip fittings are made from No. 12 music wire..."

Note planfile is from Golden Age Reproductions, so this is a later re-drawn version.

Article is in Mary's RC library issue, today. Regards,
pit - 18/07/2019
I found the Golden Age Reproductions a simplified and impoverished version of the original 1931 drawing. This will be my opinion only, The GAR drawing is clearer, easier to work from but the original has a deeper technical quality and an artistic as well, look at all the hand-written lettering and dimensioning, the care taken with the wing ribs... All this refinement today may be completely redundant, same as the long form page numbers, but the charm is no longer there. Even if GAR stopped in what, the 80s 90s? My thanks to OZ and their Library Staff for the bibliophile work :-)
Miguel Morao - 20/07/2019
Add a comment