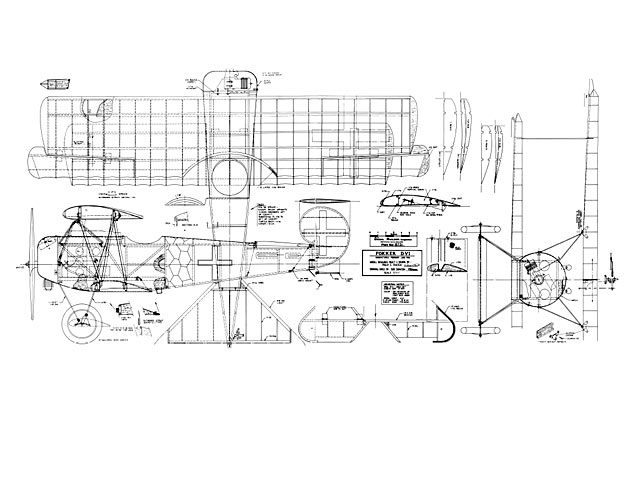 Quote: "This is a great little plane. What I like in particular is that the builder can use a ready-made cowl available from www.proctor-enterprises.com".

Quote: "First published in Model Builder almost 17 years ago, this rare WW-I biplane fighter more than deserves this second exposure. At only 51-inch span (2 in = 1 ft scale), it is easy to transport there's no need to disassemble it. Built light, a two-stroke .40 engine is more than enough power, swinging an 11 x 4 prop.

The full-scale prototype Fokker D-VI I was designed and built side-by-side with the famous D-VII during the winter of 1917-1918. Competitions for a rotary powered fighter and for an in-line powered fighter were held January 1918, and Fokker won both. The resulting D-VII's story is well known, but its co-winner lost out to its successor, the rotary-engined, parasol monoplane, Fokker D-VII I. The D-VI saw combat in limited numbers in various front line fighter units and with the Austro-Hungarians. References: 'German Aircraft of the 1st World War,' by Gray & Thetford, and 'Development of Fokker Fighters,' MAN, by Robert C Hare.

The model is not a spectacular performer by pattern standards. It is slow and insensitive to aileron. Its glide is quite steep with the thick pair of wings. The wide track gear helps keep her straight. Tail high landings are pretty and straight.

I'm a WWI airplane buff of thirty-five years' experience and this out-of-the-way model was built because I think it looks good and because most of the well known WWI craft have been built by others. The model is to two-inch scale and is practically 'built in.' All surfaces come off readily, but mostly I just leave it assembled so I can admire it. The span is only four feet and the total area is 750 sq in.

There is no scale rigging, as the original is built as a cantilever wing structure, and I assure you that the model is quite stout.

The wings are tough to build, but the rest is easy. The wings are straight on top but with tapered thickness. The front spar is simple and straight on top, but the rear spar is not straight on top because the airfoil shape gets thinner toward the trail-ing edge. One other thing before we get into details - the airfoil is semi-scale, with the center flat with increasing undercamber to the tip. I don't know what you would get if you tried to make it semi-symmetrical. A flat-bottom airfoil would work OK.

A Super Tiger 40 with an 11-4 prop provides the power. The cowl, even though it is seven inches in diameter, does not appear to interfere with the propeller effectiveness, nor with cooling.

Let's get into the construction, starting with the cowl. Once this is done, you can match the bodyconstruction to it - rather than the other way around. Carve the cowl shape from a foam block and seal with Sears' ready-to-use spackling paste . sand, and then wax. Obtain an eight or nine-inch plastic bowl and mix a slurpy batch of plaster-of-paris therein. Force the carving into the mix and weight it in place until set up. The carving will come out easily. Fill in any holes with spackling paste. Let dry and then surface with paste wax. Wipe the mold with fiberglass liquid mold release and lay in three layers of open weave fiberglass cloth, using polyester laminating resin. Use duckbill metal hand-shears to trim the cowl to shape.

The body is next. Pin 3/16 sq spruce longerons in place over the drawing. Pin and glue cut lengths of 3/16 sq spruce or balsa uprights and bond in place..." 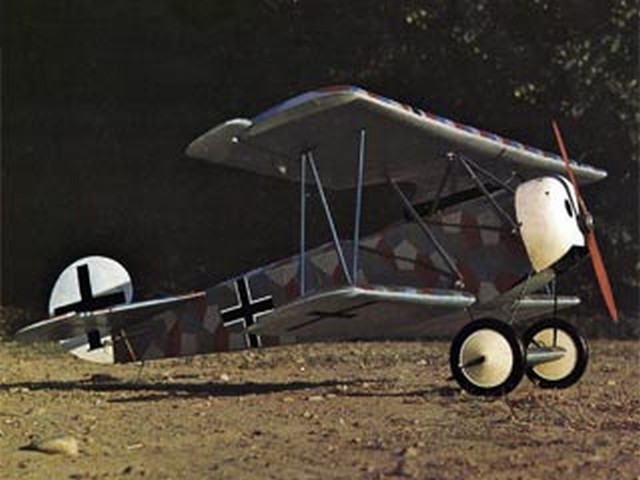