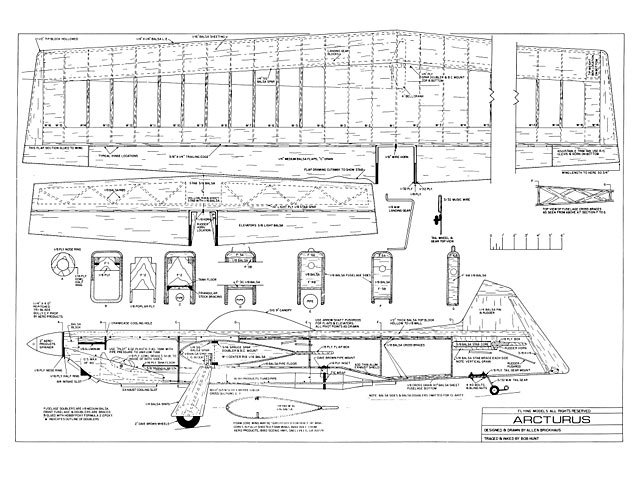 Quote: "In 1989, at the Washington State Nats, I was impressed by the true 'book-sized' patterns and shapes of Bill Rich's Vigilante. We discussed the origin of his latest creation and some talks with Randy Smith of Atlanta convinced me to build what Randy terms his Stuntcraft series of control line precision acrobatic planes.
Randy Smith's Stuntcraft series began with some basic experimentation in 1974 to create a very reliable and efficient platform for the control line stunt event. Randy will describe to you.that his Stuntcraft is a set of aerodynamic numbers, moments and per-centages that can be adapted to a multiple size of powerplants.
My particular desires for my new 1990 plane would first of all be set around the US Max .40 VF rear-exhaust motor with the Future Force pipe system. I wanted to downs-ize Bill's Vigilante to the 675 square inch wing I decided to build. This was easy with the Stuntcraft system, as Randy can upscale or downsize the numbers to match your own needs. The Arcturus I was determined to be around 675 square inches of wing area with a movable flap area of approximately 17% of the total wing area. The wing, as well as the flaps, have a one inch offset longer on the inboard side. The stab and elevator are cut to be 23% of the total wing area and the elevators are 47% of the total stab and elevator area.
Since this was to be the first all-out design of mine to house a piped-stunt motor, I wanted each and every part of the power system to be easy to access and manipulate. The fuselage would be a simple project with sheet sides, bottom and top. The pipe would lie in an inverted trench in the bottom of fuse. A SIG 9-inch plastic canopy was chosen as well as the rudder size and outline from Bill's Vigilante, to satisfy my own aesthetic desires. Other powerplant choices for the Arcturus could be the O.S. Max .46 VF, the O.S. Max .46 SF, the Royal Pro .45, the ST .60. I have flown ST .60 planes as small as 660 square inches and have seen planes as small as 600 square inches fly with the ST. The nose moment is 10 inches and the tail is 16-1/2 inches.
The plans for the Arcturus show a built-up wing if you desire to do the woodwork, but a foam core is available from Randy Smith. Construction of the wood wing is no different than any other you might have built in the past. The fuselage sides are constructed of laminations of 1/2-inch balsa and Bob Violett lightweight carbon fiber matt, glued together with slow drying epoxy..." 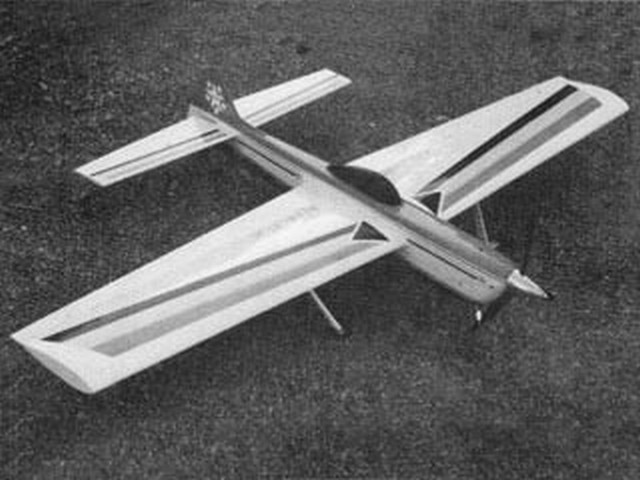