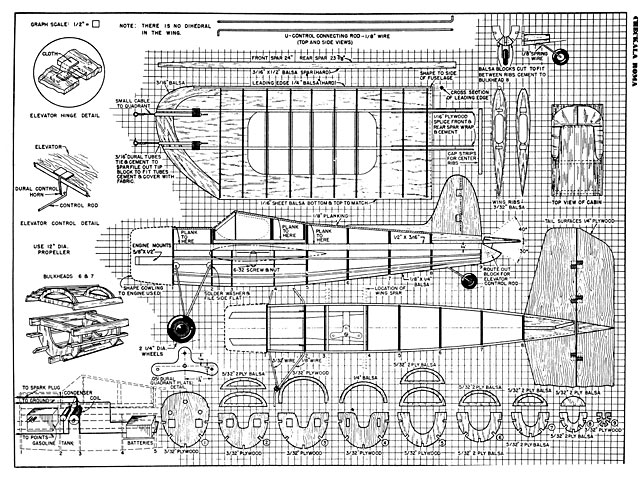 Quote: "Chekla Roma. By Davis and May Slagle. 1946 Stunt Champion and winner of a most impressive array of Troiphies.

Dave Slagle got into model plane flying by the same means that seems to capture the interest of most other newcomers, that is, by hanging around the flying field watching the activities, and asking innumerable questions of anyone who could be badgered into answering them. His first ship was a big, old Skybaby built by Bob Palmer, which Dave's Dad and Mother acquired for him in October, 1944, along with a small stunt job which speedily proved to be practically useless.

Dave got the big ship off for his first flight like a real veteran and brought it in for a perfect landing on the very first try. The flight itself was not too smooth, but it was a good beginning.

But such luck without practice was too good to last. and on the second flight he must have given it 'down' instead of 'up,' for it plowed majestically into the cement. The ship itself was not damaged much, but the cylinder of the old Dennymite was broken completely across the bottom. However, Dad came through in the clutch with a friend who silver-soldered the pieces so well that the engine was hotter than ever!

Dave was soon flying again, to such good purpose that he entered an LERC (Lockheed Employees Recreation Club) sponsored meet and captured the first trophy for his collection. a Tiger Shark kit. Bobby Thomas, another eleven-year-old, was the only other junior present, and he, too, carried off a prize. Shortly after this meet Dave was invited to join the Burbank Model Club. where the lower age limit of fourteen years had to be relaxed considerably to allow eleven-year-old Dave to enter. Most of the older fellows were great at encouraging and helping the younger members, and Dave gave up the Cub Scouts in order to attend the Tuesday night meetings of the Model Club. Pretty soon the Sky-baby had acquired the name of 'Bulldozer,' and had most of the local model flyers shuddering in their sleep at the close shaves it got while per forming some of the antics Dave demanded of it.

On his twelfth birthday the elder Slagles came through with an Ercoupe. which Dave proceeded to power with a Cyclone bought with money acquired from the sacrifice of a treasured electric tram.

Unfortunately, however, the Ercoupe came to grief in its first contest, breaking the wing in an inverted dive. Later it was discovered that the control rod was bending because of the lack of fair leads in the bulkheads, but for this contest Dave had to fall hack on old Bulldozer, which performed in storybook fashion to save the clay. From then on Bulldozer went to every contest, regardless of what newer ships might be in flying commission!

One day, Reginald Denny saw Davie fly at Santa Monica and was so impressed that he promised the youthful modeleer the very first engine to come off the production. line after the war, a promise which was fully kept. Dave is very proud of this little powerplant.

About this time Dave began dreaming of a ship for inverted flight. and after much consultation, study, and burning of midnight oil 'Chickery Chick' resulted. The first flight was again a big success, but the second ended in one of those really superior-type crackups in which the engine gets relocated in the rear of the fuselage. Nevertheless, inverted flying was soon resumed, with dozens of experiments with gas tanks and engine mounts of weird and wonderful design. Chickery Chick began to show signs of wear and tear, so 'Chala Chala' ( wonder where these names come from?) was cooked up as a successor, but an overly thin rib section which made the ship fast but tricky on control was unsatisfactory to the piloting member of the family.

Dave soon started the 'Checkala Roma,' with thicker, wider ribs and a wider elevator. The small rudder excited some perverse comment, but a later ship with a larger rudder, the 'Ina Bananika,' didn't perform quite so well (coincidence?).

Checkala Roma proceeded to win high point spot in the precision com-petition in the Western Open, ant; anybody who saw the results of the Nationals knows how well the little ship fulfilled the Slagle family hopes.

Like most other enthusiastic modelers, Dave is looking forward to new exploits and experiments, and is hoping to be able to compete in several of the big meets. And, of course, like most young fellows, Dave finds a lot of other things interesting as well. His grandparents have built a summer cottage on White River which they firmly insist has chipmunks in the basement and a snake on the steps. Dave has written insisting that the snake be left strictly alone until he can get there to catch it, and in the meantime is saving eve?), loose dime to finance the trip. Nevertheless, Dave says if he can't get to both the Nationals and White River (his Dad has only one vacation), the snake will have to wait!

1. The crutch is made of balsa 1/2 in x 3/16. The upper formers, S5 to S8, are glued in place on the crutch and this area is planked with 1/4 in balsa.
2. The tail surfaces are made of 1/4 in balsa - the stabilizer 4 in wide, and the elevator 3 in wide. The elevator is sanded equally on both sides. Use cloth hinges and then cover the entire surface with silkspan, put on with dope. This stabilizer and elevator is now glued on the crutch. The rudder is cut out (the hinge cutouts are optional of course). The vertical fin is then glued into place, leaving the rudder to be set on after the tail blocks are in place. These are pinned tightly to the base of the rudder to strengthen it, and then cemented.
3. In constructing the wing, the spars were made first - could not get 48 in spars, so had to splice them in the center. Use I1/16 plywood slices (on both sides of each spar) and clamp them tightly until the glue is dry. (This plywood is cut at an angle to avoid stress concentration.) Extend this beyond the second rib; however, it would make the wing stronger to extend it about two ribs more..." 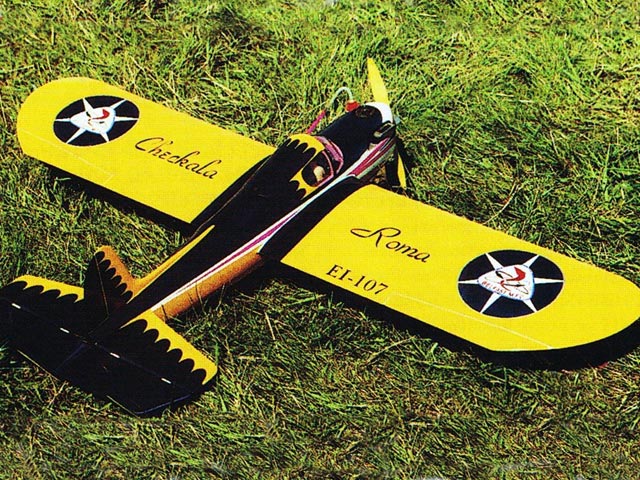 Correct name had to be "Check-a-la romey ". All the aircraft names cited in the article came from a Swing song titled Chickery Cheek by Sammy Kaye, as sung by the famous "Andrews Sisters" trio, and Frank Sinatra too.
Text lyrics say:
"Chickery chick, cha-la, cha-la
Check-a-la romey in a bananika
Bollika, wollika, can't you see
Chickery chick is me?".
Strangely article author ignore this song.
Let's dance and Flying in circle...
https://www.youtube.com/watch?v=ROwCHoCmp50
Pit - 03/02/2021
a) Very nice finish on the colour pics, b) How is it humanly possible to know about this song from the abyssal depths of memory?
Miguel - 08/02/2021
Usually I listen Swing Era music during vintage cl model construction, Classic music during sailplanes construction...and so long
Pit
pit - 08/02/2021
I had to listen to the song and it gave me a broad smile, so thank you :-) I'm more of a Baroque listener for all modelling purposes, with military marches thrown in for those boooring tasks. Bagpipes, Prussians and John Philip Sousa do wonders for my adrenaline, but not all at the same time!
Miguel - 08/02/2021
Add a comment