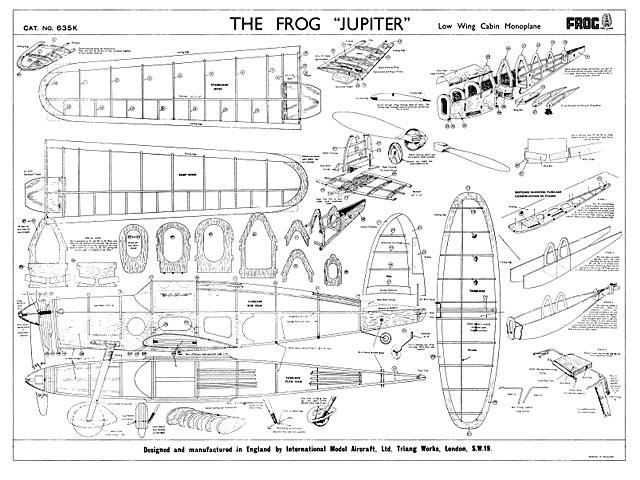 Vintage day at Old Warden is a great event in my calendar and I nearly always see a model that inspires me. Brian Downham (when he's not having a lunchtime doze) makes some lovely aeroplanes, but his Frog Jupiter always seemed rather special. With its low wing, 30's racer look, and seductive shape, it is a beauty. As soon as I saw it circulating the hallowed turf, I knew I had to have one, but I didn't pursue it till I spotted it in Mike Woodhouse's catalogue along with many other desirable plans Visiting Mike to pick up a plan, I took the opportunity to stock up with his special quality balsa (each sheet marked for weight and density), and some Esaki Jap tissue.

which he sells along with hundreds of hard to get items. The Jupiter was a 1947 Frog kit and Bob Jones has kindly re-drawn the plan and added the wood patterns we need, plus prop details - so there's no excuse for delay.

There's a lot of lumber in the fuselage, so you need nice light 1/8, 3/32 and 1/32 sheet and keep weight down as best you can. The fuselage is rectangular aft of the wing, but at the front the sheet sides are pinched in to fair with the scaleish nose shape. If you have used lightwood for your formers with vertical grain, they will bow as you pull the sides in. I modified my formers as shown, to include a horizontal square spacer at the bottom, which helped a lot.

Wing fixing is tongue-in-box, which is a good knock off feature. I opted for 1/64 ply each side of a 3/32 balsa tongue, well drilled to save weight.

Undercarriage legs are spruce, hinged at the back with rubber band springing working through tubes in the fuselage. It's all very practical, if a little heavy. The spats add a lot to the appearance, but I kept them thinner than drawn, to save weight and reduce drag. The wing is tapered in plan and section with rounded tips - all scale like features, which enhance the lines. The only change I made was to reduce the width of the LE, again with weight in mind.

This model calls for a 13 inch hand carved balsa prop, so I screwed up my courage and made one, but l didn't know how to hide the freewheel device in the spinner. My prop hub was too bulky and the balsa too weak to thin down. Fortunately, I still have a 'Paulina' prop given to me by the proprietor of Teddington Models, 35 years ago_ Beautifully carved from a wood that looks like Lime, it is very, very thin. Try as I might I just can't match the exquisite quality of this old prop.

The spinner in the Frog kit was plastic, which must have been an innovation in 1947. I chose the easy way out and made a balsa/ply laminated spinner 'turned up' in the drill and hollowed out. Brian made his in fibreglass..."

Quote: "FROG Jupiter, a 36in span low wing semi scale model of a sports aircraft with snappy flying qualities". This plan shows all fuselage formers, but only the root rib - no patterns for the other ribs."

Update 12/10/2016: Added new wing layout drawing, thanks to RonaldL. Quote: "Finally found the time to resize the wing layout. It's not the most precise or advanced drawing but should be sufficient to build a wing from. At least it was for me. I would be most delighted to see someone else taking advantage of it. Ronald" 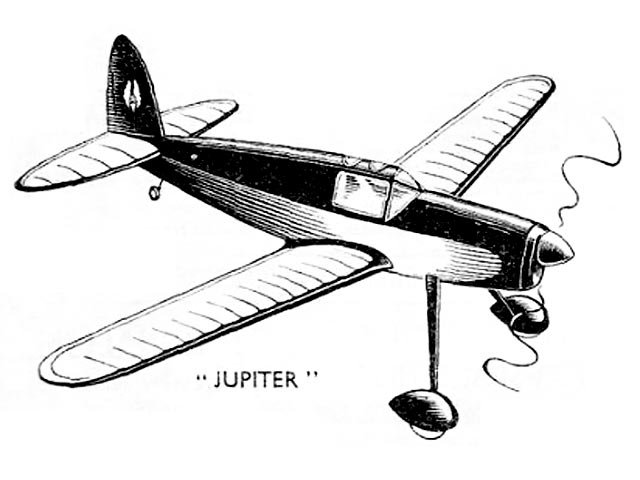 This is one of my all-time favourites. Thanks again to Mike Stuart who runs the excellent www.houseoffrog.co.uk site for submitting this one. I like the styling of this so much I have ended up using the artwork as a site logo for Outerzone. I must get around to building this one day. Will probably end up with 3 channel RC and electric power, as a park flier, so with no undercarriage.
SteveWMD - 02/06/2012
Hi Steve, I posted the wing layout for the Jupiter in my build thread at http://www.rcgroups.com/forums/showthread.php?t=2639421 I'm happy to be able to contribute to your great web site. Please also use a picture of my Jupiter to add, as well. My Jupiter has an enlarged wing +20% span and chord and flies nicely at around 230g. Best regards,
RonaldL - 12/10/2016
I've added a few of your fantastic photos, Ronald, I hope that's OK [more pics 003-006]. The Lego jig is genius!
Mary - 12/10/2016
Hi. Frog Jupiter from your plan and Belair parts set [more pics 007-009]. Brilliant plans service. Thanks for your hard work. Very best regards.
TrevorT - 10/10/2017
Added super photo of Mike Mulholland's lovely build [more pics 012]. Note the hand-carved wooden prop :)
Mary - 30/01/2019
Hi guys can I transform this into a 4 chanel RC??
AeroVic - 03/02/2019
If you know what you are doing, yes. It could be done. It would not be a beginner's project, though.
SteveWMD - 08/08/2019
Add a comment