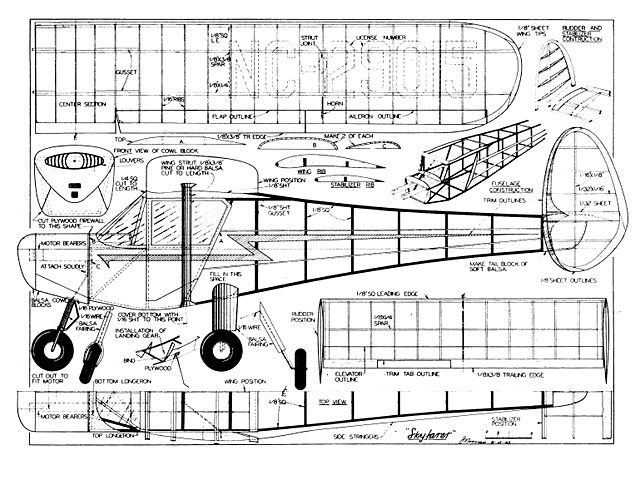 Quote: "DESIGNED for supersafety, the Skyfarer features tricycle landing gear, twin rudders and extreme inherent stability. The controls consist of a throttle and wheel, making it possible for a person with only automobile driving experience to solo in two hours. It is impossible to spin the model, which will just about fly itself. These qualities combine to make it an ideal flying scale model. An accurate scale model, powered either by rubber or gas, can be built from the plans, since scale outlines are exact.

The best motor is, of course, the Atom. It is recommended that an older type of Atom which has been flown ten or more hours be used, because heightened power isn't necessary to get slow, realistic, true scale-model flight. By adding power and more dihedral, the ship can be made to fly like a contest model.

In constructing the fuselage, use the perspective as a guide in assembly. Lay out sides of the hard 1/8 square. Assemble the sides and then add the nose and side bulkheads. Install 1/16 music-wire landing gears. Bend to fit the fuselage, using the plan for correct strut lengths. Lash and cement firmly into place. Plank the nose sides and the top with soft balsa.

Cut out the 1/16 plywood firewall, slotting it to take the pine motor mounts. Cement it to the nose of the fuselage. Carve the nose block to rough shape and cement it to the nose. Sand to a smooth finish; cut it off and hollow it to fit the motor and mounts, cutting away as little as possible on the outside surface. Cement the motor mounts into place, then fit the cowl over them and cement into place.

Slip plywood squares over the point where the landing-gear wire touches the fuselage; cement them well. Add stringers to the fuselage sides, cutting them from 1/16 sheet as shown. Carve the tail block and cement it into place. Now sand the entire fuselage structure. Add landing-gear fairings and details, any type of wheels may be used.

Mount the motor and install the timer. Mount a single pencell, coil and condenser near the top of the fuselage about an inch behind the wing. Wire it in the usual way, using as little wire as possible. Use very small, light booster clips. Test for spark to make sure that the ignition system is working.

Cover the windows with thin celluloid. Cover the entire fuselage with GM Silkspan, wetting the paper first so that it will go smoothly over the curves. Three coats of dope are advisable: color dope all exposed balsa parts, first rubbing cement on them and sanding to smoothness.

For wing construction, make a template of tincan metal. Cut out the required number of ribs. Lay the wing on a flat board and cement all parts securely. Use hard spars. When it is dry, carve and sand the leading and trailing edges to a smooth contour. Sand the tips so that they are round at the leading edge and taper to a point at the trailing edge. Cut and cement to a dihedral angle, keeping the center section flat. Raise each tip from two to three inches. Add gussets and touch up the whole structure with sandpaper. Cover the wing carefully with light tissue or Silkspan. Two light coats of dope are recommended. The wing can be cemented to the fuselage or fastened with rubber bands. Two husky struts are cemented from the point shown on the wing to the bottom longerons.

Use the same general procedure for the stabilizer that was used for the wing..." 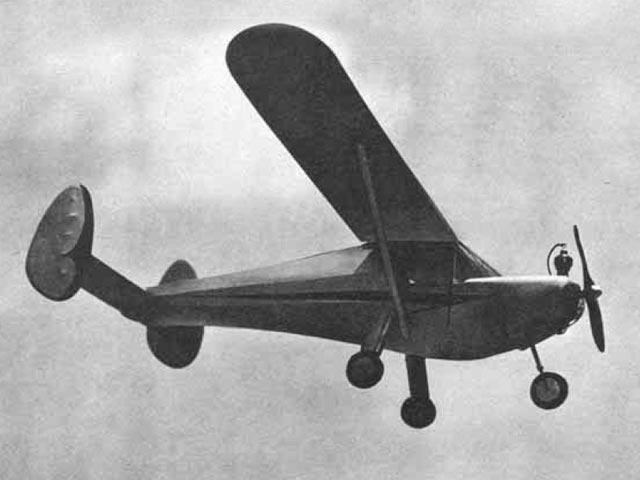