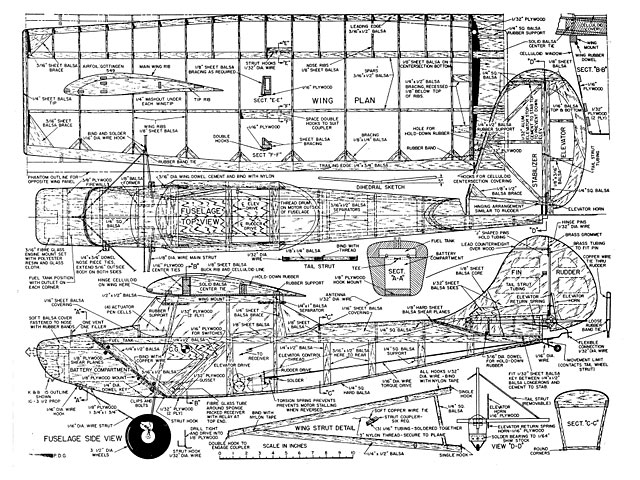 Beautiful day, let's go flying. Check the batteries, check plate current, distance check - check and double check. All's well, pour in the fuel and away we go! Left - right - straight ahead... she flies like a dream. Oops. Missed a beat? Out of range? Escapement sticking? Batteries older than we thought? Interference? Something's wrong. Hard left rudder - hit the panic button - call for another transmitter ...too late!

Let's hurry over and look at the damage. Can't be too much, we hope. Oh-oh, total loss from the rear of the cabin door forward. Left half of wing splintered. Radio looks like a truck ran over it. B battery shot. Aw, what the heck, with 20 or 30 hours' work all will be ready again. Might make it by next weekend!

If all this sounds familiar and you don't like it, you might be interested in building the Eliminator. For me, this ship has eliminated most of my pile-in troubles - and believe me, I've had my share.

The ideas behind the design of this model were several. First, I wanted an airplane to survive crash landings; second, I wanted a near-scale model for appearance (no offense intended to you non-scale flyers) and third, I have very modest hopes of competing with Walt Good and others in the International Endurance contests.

After considerable thought, the plans as shown in this article were developed to take the 'crash' out of crash landings. The nose assembly was made solid and rugged since it is usually the first part to contact terra firma. A shear plane was provided just aft of the nose assembly, at which point the rest of the body is attached. The shear plane surfaces are made of 1/8 plywood to stand the gaff. In a similar manner, the tail assembly is arranged to come off with ease, fore or aft. A large seat was provided for the wing in order to eliminate the need for dozens of rubber bands, which incidentally, often will not let go in time when the model is flying through trees or landing on a wing tip.

Further, by locating the heavy A and B batteries in the rugged nose section, possible damage to the batteries was reduced and damage to the body from flying batteries eliminated. In a last full effort to reduce crash damage, the plane was made as light as possible, (4-1/2 lbs flying weight) and the radio receiver (Walt Good's three-tuber in this case) was rebuilt in circular form and bottled up in sponge rubber and a fiberglass tube. No more radio damage. Also, by mounting, the radio container at an angle and securing the sensitive relay on top of it, damage to the relay has been reduced to a minimum.

Now, as to my desire for a scale or near-scale airplane, I've had the bug ever since my first ship. I was adequately warned about the differences in aerodynamics between scale models and their parent counterparts; in short, they usually don't work worth a darn. Nevertheless, I proceeded to violate some of the ground rules, in the interest of scale appearance. The stab is small and the tail moment short, but I have been able to recover from all dives so far. The wing is average, making the finished job a little on the umbrella side. However, the whole rig has good wind penetration and gets off fairly rough ground at about 12 to 15 miles per hour. In short, I have found no objec-tions to the semi-scale construction. A 10 in chord x 5 ft wing would be near scale for this ship. I hope to try it someday soon. Should make a real stunt job.

The Eliminator should work out well for endurance. With a little effort, the weight could be whittled down to 4 lbs by using Silvercels instead of dry cells for the rudder actuator, and by leaving out the elevator servo. The K&B 15 is a real workhorse and it pulls well with Tony Grishes' 10 x 3-1/2 RC Tornado props. Fuel mileage is good too.

While other types of control would work well, I am a proportional man - have been ever since the 1952 Selinsgrove get-together when Howard McEntee demonstrated the ease and smoothness of operation in using a circular-magnet actuator. I use a Mighty Midget Motor made by Victory Industries, Guildford, England. This little fellow retails for $3.50 in this country and $2.50 overseas, less duty, etc. A real fine motor that always goes, and which produces terrific torque on 11/2 volts (2 pen cells in parallel.)

I have had some luck with a semi-proportional neutral-to-up elevator, which is shown on the plans. A rheostat in the pulse box motor circuit gives elevator action by changing the pulse rate, thus shortening or increasing the rudder drive motor swing, and thereby increasing or decreasing the total elevator drive motor energy, to raise or lower the elevator. The elevator is spring loaded to neutral with just enough tension to hold position when upside down..." 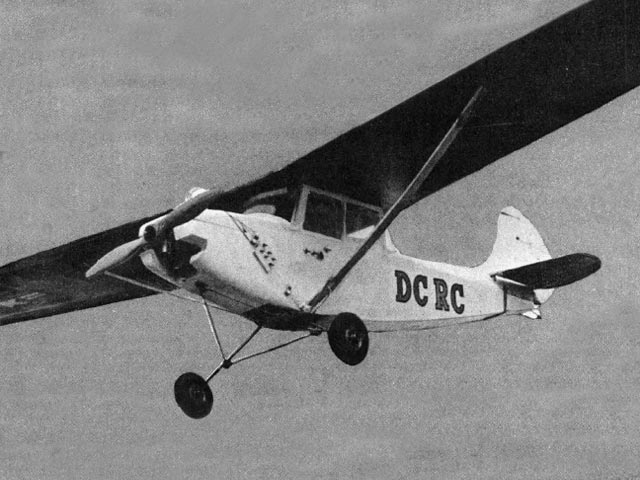