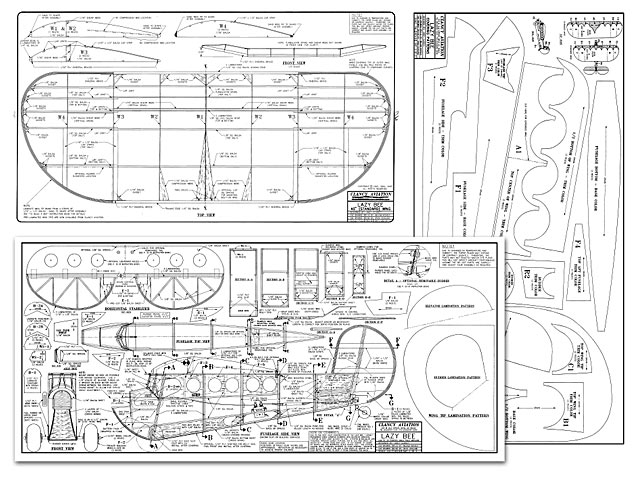 Lazy Bee. Radio control sports model. Classic design. This is the original 40in wingspan version of the Lazy Bee. Plan is on three sheets.

Note 07/08/2020: the rights to this design remain with the designer Andy Clancy, who has graciously agreed to have the PDF plan remain here on Outerzone as a free download. See the new Clancy Designs website (and store) at https://www.andyclancydesigns.com/ for details and to order online your own laser-cut kits and accessories. International shipping is available.

Quote: "The Lazy Bee has grown steadily in popularity since I first began offering kits for sale in 1993. This popularity is due in part to the incredible versatility of the design. The Lazy Bee has flown successfully with two-stroke and diesel engines (.049 to .15), four-stroke engines (.20 to .26), and as an electric (.035 to .075) plane. It also makes an excellent float plane (Lazy Sea Bee.)

I have learned that the Lazy Bee can support a much higher wing loading than I initially thought practical. I have seen Lazy Bees that weighed less than a pound, and others as heavy as three pounds. My original intent with this plane was to use it to fly in my backyard (which is too small for control line flying!). I accomplished this with a Cox Texaco .049, Ace throttle, and micro-radio gear. I successfully flew this plane indoors, inside a small hangar built to hold two Cessnas. The delightful flight characteristics of the Lazy Bee are due in part to the very low wingloading. I have introduced a Lazy Bee 48 inch Extended Wing (oz2316) to reduce the wingloading on heavier planes. It was developed with the electric Lazy Bee in mind, but it works just fine with gas powered Lazy Bees.

There are, of course, a lot of possibilities for the Lazy Bee that have yet to be explored. I have heard of tri-motor versions, 1.5 scale, double scale (we will have plans available soon), triple and even quadruple - scale. I have heard of ultra light projects, half-scale versions, and Lazy Bees modified for payload contests. They are used as glider tugs and glider launchers, same have ailerons, some have dive brakes. There are two-channel and rudder only versions flying with the Cox Fail-Safe radio.

I cannot possibly cover all of these variations in this instruction book, but I can address the most common variations and answer sane of the more frequently asked questions.

Four-Cycle Lazy Bee: The Four-Cycle Lazy Bee requires a 'soft mounted' engine. This is because the engine vibration can cause structural cracks if mounted without any dampening. The details of the soft mount are covered in Chapter Eight - Final Assembly. In addition, the stab should not have lightening holes and the radio gear will have to be moved as far aft as possible, in order to achieve the proper balance.

Extended Wing Lazy Bee: This option is available in kit form directly from Clancy Aviation. Special plans are included. The only change is to the center section of the wing. There is no other change to the plane. The building procedure is the same; there are just two more ribs in the wing [see plan at Lazy Bee 48 inch Extended Wing (oz2316)]. I decided not to add a special section and draw a bunch of new assembly diagrams. Just use a little imagination or cross your eyes a little bit while looking at the wing assembly drawings.

Lazy Bee Float Plane (Lazy Sea Bee): The Lazy Bee Floats (oz7209) are designed for fast installation and will allow the Lazy Bee to fly from water, snow, and even wet grass. You can convert the Lazy Bee from a land plane to a sea plane (or vice-versa) in less than 5 minutes! The floats come with detailed plans which include installation details. There is nothing special that needs to be done while building the plane. If you plan on using your Lazy Bee as a float plane, I recommend that you seal the wood before covering. You can use clear dope, Black Baron Clear Epoxy, or similar products. This will help protect the wood from the moisture. You should also check the prop clearance to be sure that the prop will not strike the water. This is more likely to occur with heavy planes which ride lower in the water and with props over 10 inches in diameter. One solution is to switch to a 3-bladed prop, which lets you reduce the prop diameter by an inch or so. The pitch should stay about the same.

Electric Lazy Bee: There is a wide range of possibilities for electric powered Lazy Bees. Generally, geared motors work better, but are not required. No modifications need to be made to the plane in order to build as (or convert to) an electric. The gas tank shelf is a structural member and should not be removed. There is ample roam Inside the fuselage for a good sized battery pack, and the motor mount shelf can accept a wide range of motors as well. I recommend that you attach the battery pack to the plane with velcro so you can swap battery packs quickly. You may want to build an extended shelf in the first couple of fuselage sections (to improve access.) You can do this by placing 1/16 plywood on top of the balsa sticks which are right above the bottom longerons. A hinged door can be added, too. For details, see the 'Electric' section following the 'Options' section. 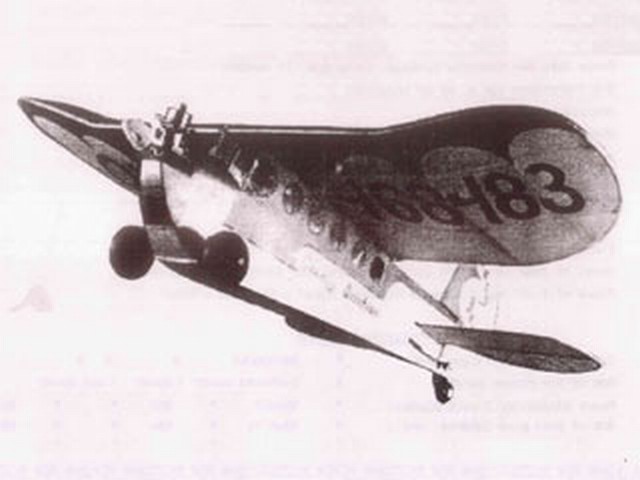