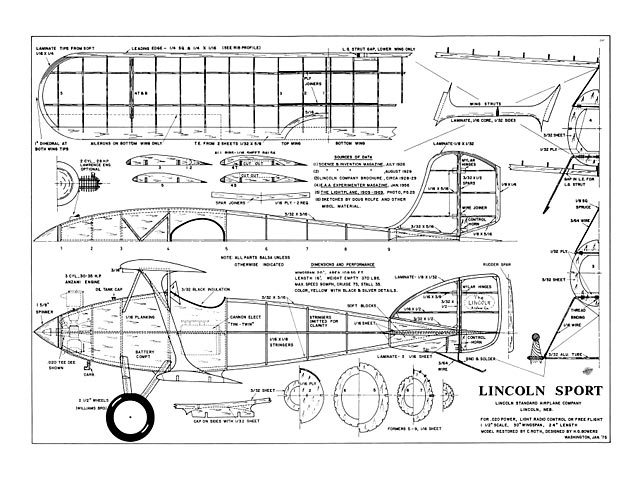 In America during the mid 1920's the fascination that aviation held for the young may be compared with that which sport cars, rock music, and sex holds today. During that era, throughout the rural hinterland there existed an institution often referred to as the 'castle of the half-moon.' In addition to providing the service presently taken for granted today as an inherent convenience, it was considered a place of solitude; a place for day dreaming, and for making grandiose plans; all of which were inspired by the readily available copy of the mail order catalog and other magazines of the day. Usually these publications were found with many pages missing.

One such magazine that I well remember was the July 1926 issue of Science and Invention which featured an article on how to construct your own airplane. Beautiful two page drawings were included along with complete construction details, costs for components, etc. For the affluent, the completed aircraft including the powerful Anzani engine could be purchased at the Lincoln Standard Airplane Company factory in Lincoln, Nebraska for $1500. It could also be obtained with the Lawrence engine for slightly less. Complete, detailed construction drawings could be purchased for only $15.00, and if you were not a qualified pilot, an additional five dollar 'practical home study course' to become one took care of this trivial matter.

During those great days my plans to build the 'Lincoln Sport' never materialized, but some 25 years later, after browsing through some musty old magazines in which I found the Science and Invention for July 1926, the fire was rekindled. Being a major in the USAF at that time, with a more practical approach as to what I could or could not build, I settled for a 1-1/2 inch to the foot Free-Flight scale model of the little plane. I installed an old K&B .035 Torp Jr engine and the 30 inch biplane proved to be a real success.

During subsequent assignments about the world, the model remained in storage in the home of my old friend, the late Manley Mills, of Royston, Georgia. A couple of years ago I brought the model back to my home in McLean, Virginia where it hung in my shop. One evening Charley Roth, a fellow modeler of extraordinary talent, and I were looking at it and speculating as to its possibilities if restored and converted to either pulse or 2-channel radio control. Charley had just acquired a new Cannon Tini-Twin radio unit which looked like a natural, so I asked him to have a go at it.

After 18 years covering becomes rather hard to remove from light balsa stringers, ribs, etc, but Charley got the job done and the structure was sound as a Swiss Franc. He installed an .020 Cox Tee-Dee engine, all the radio components, and recovered the little gem with yellow Jap tissue, along with adding all the scale details. Believe it or not, the pictures accompanying this article were made 17 years after its construction. I believe this speaks well not only for the initial design, but for Charley Roth's restorative talents as well.

I have always considered it an insult to the intelligence of the average modeler to include a glue joint by glue joint description for every phase of construction, so I will not bore you with such detail. Instead I will only call your attention to construction highlights where some difficulty could possibly be encountered.

Usually on a biplane one of the major problems is the proper alignment and mounting of the wings, particularly when the lower wing is located beneath the fuselage. By including the lower wing saddle on the keel piece anti by use of the centerpoint strut mounting for the upper wing, these problems are non-existent. The single 'I' type interplane wing struts are also quite helpful, as well as being simple.

My original model did not have laminated wing tips and tail outlines, however, I strongly recommend this technique. It is very simple to laminate surfaces by soaking the strips of balsa in hot water for a few minutes. then using thinned out Titebond glue as they are wrapped around a slightly undersized form. Hold in place with masking tape while drying..." 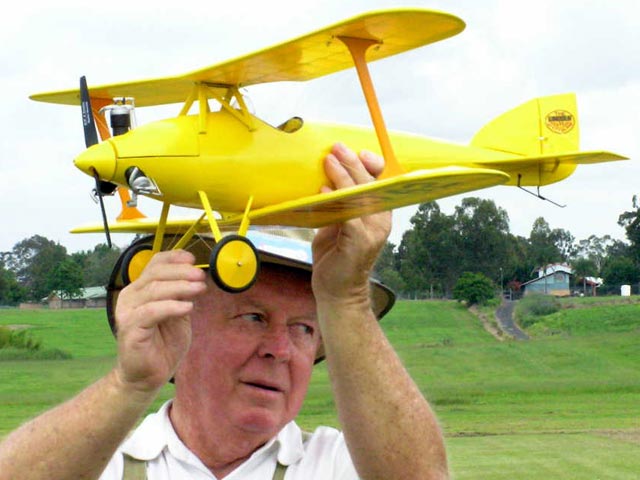