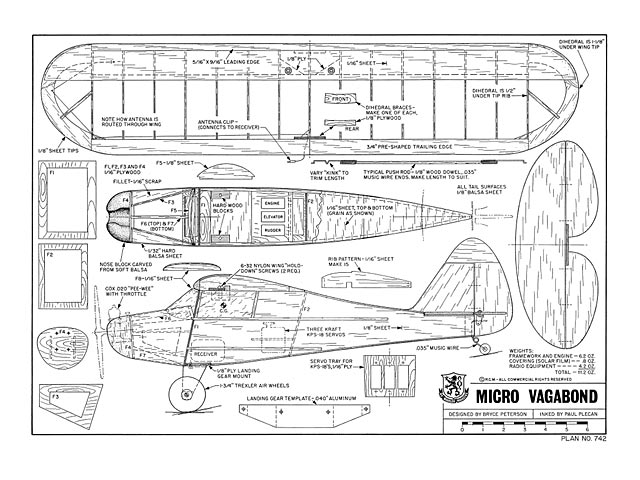 Quote: "Designed for the new miniature radio systems, this 18 inch replica of Bryce Petersen's popular Vagabond is a must for the small field flyer.

It has been said: the bigger the model, the better. It all has to do with Reynolds Numbers and air molecules. Models are getting bigger and bigger because modelers are striving for realism which is a product of efficiency.

The idea of a small 18 inch R/C model flying around in a scale-like manner might seem like the impossible dream. Those of us who used to build the little rubber powered models surely have day dreamed about the day we could radio control a model that size. It has been tried with ine standard radios, with the usual result of a heavy wing loading causing the super-fast, barely controllable bomb.

When you look around today at the state of the art in electronics and engines, it is almost inconceivable that you can purchase a servo that weighs only 1/2 oz and a .020 engine with a dependable throttle. All This was too much for me, so I had to give it a try.

I feel that everyone would like to build a 'cute little airplane', but hesitates because of the size and weight of the radio gear. Well, fellows, the time has come. Team up a set of Kraft KPS1B servos with a Cox .020 with throttle: add a small receiver wish a 125 mah battery and you come out around 5-1/2 oz. With one servo in motion, the current drain is around 11 milliamps so you can have a comfortable 45 minutes flying on one charge.

To make the project more interesting. I promised my friends I would build an R/C model with full control and shoot touch-and-go's in a gymnasium.

Because of the low Reynolds Numbers involved, you should choose a stable design. This is why I scaled down my full size Vagabond (oz6869) model. It is so stable in the air, it is almost unfair to enter it in a fun fly contest.

The Micro Vagabond will fly in a scale-like manner and gives the pilot plenty of time to react. Nice lazy Figure Eights around the antenna is pure joy. Because the model is never far away, I installed the antenna in the wing. This keeps that horrible looking wire from dangling from the rudder. The receiver switch is a small shorting plug instead of the usual switch. With the new two-wire power packs, you simply break one of the leads.

The model is simple to build. The woodwork can be completed in three evenings. When it comes to installing the pushrods, things get a little tight. The pushrods are 1/8 dowel and .035 music wire. The control horns are handmade from soft aluminum. If you are a beginner in this sport, I would suggest that you build several trainers before trying the Micro Vagabond..."

Update 04/11/2014: Replaced this plan with a much clearer copy, thanks to theshadow. 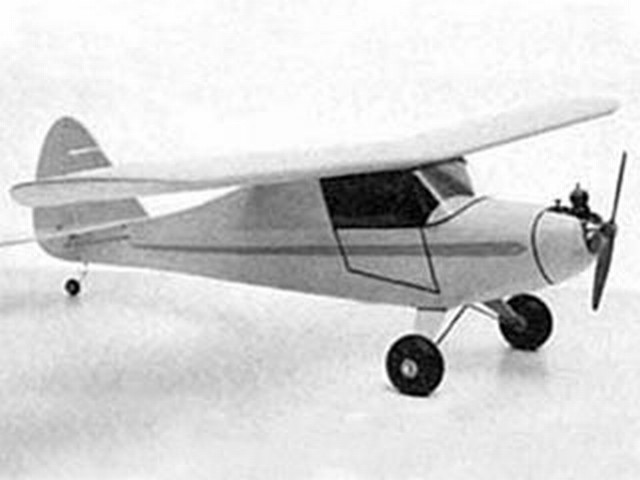 Quoted wrongly by more than one source (including by RCMplans themselves) as having an 18in wingspan, this plan is actually 26in span.
SteveWMD - 03/11/2014
Steve, Here are some pictures of my Micro Vagabond (Bryce Peterson) [see more pics 004, 005]. I started with a Cox PeeWee 020 RC but soon enough I put in an outrunner. It is not a stellar flyer. I built it from full size plans that I ordered from RCM.
dfritzke - 10/11/2014
Add a comment