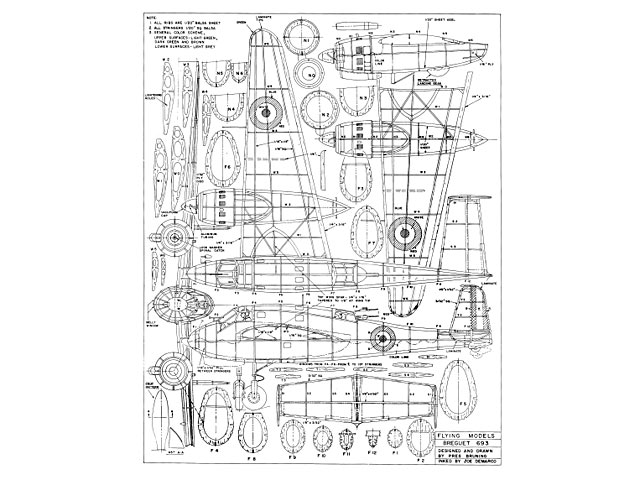 Quote: "This little gem from France was conceived as a three-seat fighter similar to the famed British Mosquito, but ended up as a low altitude ground attack bomber before the Germans took the design over and pressed it into Vichy French service during World War II. I selected it for its large radial engines, minimal construction aft of the CG and its good proportions for rubber band power.

Construction is very similar to the Martin B-26 Marauder (oz1219) I built years before this one. Like the B-26 the Breguet has a top and a bottom keel construction with a full length waterline keel on each fuselage side. That makes it easy to set up each with the fuselage bulkheads in place. Then you can join the two sides using eyeball alignment. The rest of the stringers are laid in, left and right simultaneously, to ensure symmetry.

One important note: leave the top of the fuselage open between F4 and F7. The entire wing and engine assembly is added later, then completed with the fuselage stringers and bulkhead tops. The last to be tissue covered is this section.

The wing and engine nacelles are built as one integral unit, the dihedral added later. This is the first time I tried a layered tissue technique to yield the three-colored camouflage scheme. I lay the base color, light green, down first and then overlapped the other two colors, the dark green and the brown over that.

Carefully cut out the patterns you want, making sure they overlap. Then carefully brush a light film of thinned-out (50/50) Elmers glue and stick them together. Now cover the wing, top and bottom, and nacelles separately. Be careful to align the color pat-terns. Water shrinking is done after sealing the joints with 50/50 thinned-out clear ni-trate dope. Pin the wings in a jig if you are worried about warps. Give the engine na-celles two coats.

The horizontal and the twin vertical stabilizers are built conventionally. Construct the outlines first and then elevate them so you can slip in the symmetrical 1/2-inch thick ribs in their proper places indicated on the plan. Check alignment from tip to tip, and use a sanding block if necessary..." 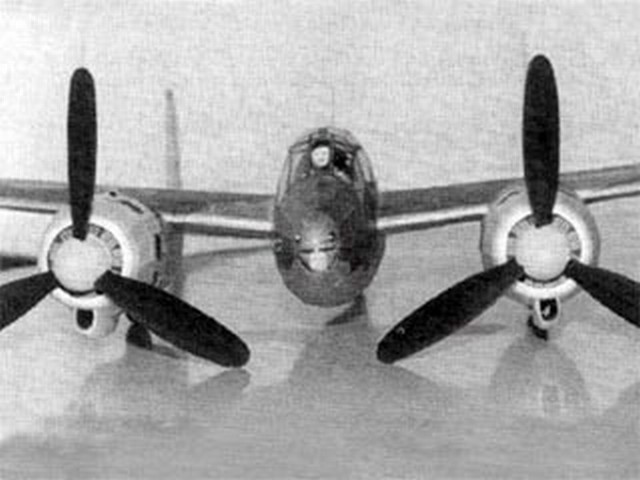